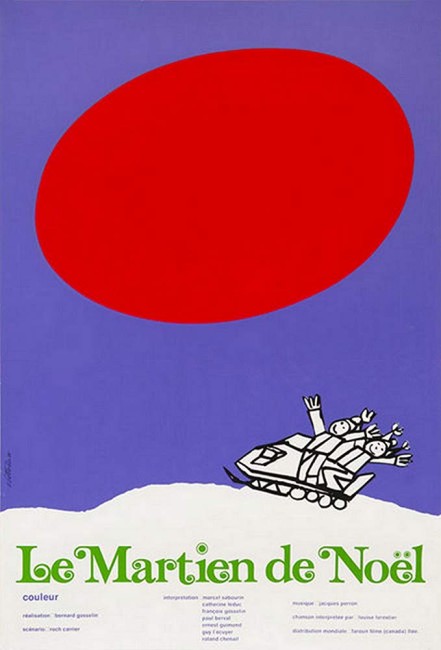 A bizarre Martian lands his saucer in a small Quebec town on Christmas Eve where his appearance bewilders the locals. Two children find his dropped flying wand. They befriend the Martian and he showers delights on them. They get their uncle to help repair the Martian’s flying saucer and he takes them for a ride around the world. The Martian then leads the befuddled police on a merry chase with his otherworldly powers.

This French-language Canadian children’s film is a work of truly astounding banality. It gives the impression of the filmmakers having set out to make another film in the vein of Mary Poppins (1964) wherein two children go flying and engage in surreal, fun-filled adventures with a mysterious visitor.

However, The Christmas Martian has been extremely cheaply made. The effects come terribly penny-pinched – it is interesting to watch when the saucer is in flight how the aerial on top of it inexplicably thickens to become the cable being swung by an off-screen crane, or how when people fly attached to the wand that they are never seen in full body shot while in flight.

The Christmas Martian has a bizarreness that makes for compulsive watching in an awful way. The nonsensical runnings around the town play like Keystone Kops capers filtered through an hallucinogenic haze. Some of the performances, like the gibbering performance of Marcel Sabourin as the Martian or Roland Chenail as the cop who spends the entire film popping peanuts, are bizarrely fascinating to watch in terms of the overacting indulged. There is much potential for this film to be rediscovered by the Psychotronic/Mystery Science Theater 3000 (1988-99, 2017-8) crowd.