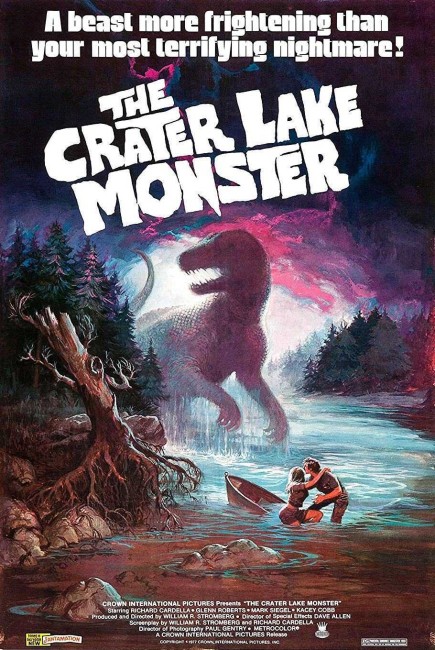 People out on Crater Lake and in the vicinity of its shores are going missing. The townspeople report seeing a monster in the lake. A palaeontologist believes that it is a prehistoric diplodocus that was hatched from an egg buried on the lake bottom when a meteorite recently came down. As the monster menaces the area, Sheriff Steve Hanson tries to stop it, while other locals are determined to catch it.

The 1970s was filled with a spate of cheap Bigfoot movies following the release of the real-life Gimlin-Patterson clip in 1967 that claimed to show actual film footage of a Bigfoot. Many of these films attempted to sell themselves as mockumentaries (even though the term had not been invented). After the Bigfoot film dried up by the end of the decade, a few filmmakers then turned to Loch Ness Monster films. As such, you get the feeling that The Crater Lake Monster was intended as an American Loch Ness Monster film using the real-life location of Crater Lake in southern Oregon (even if it is not filmed anywhere near there but at Huntingdon Lake in Fresno, California).

The Crater Lake Monster has ample reasons to be considered a bad movie. Crown International only gave it only a reported $100,000 budget and failed to provide more that they had originally promised. This becomes painfully obvious in a scene where Michael Hoover and Suzanne Lewis are out on a boat on the lake in broad daylight and are talking about the beauty of the moonlight and stars being out where it is perfectly clear that nobody bothered to print the scene day for night.

Though modern internet commentators pour ridicule on the stop-motion animated effects, these are at least adequate for the era. The main failing is that they are required to cover too much ie. they are on display when they should be kept to the shadows or only briefly glimpsed. The one scene where these surpass themselves is the climactic one where the dinosaur is fought off using a bulldozer, a scene that has been undeniably recycled from Dinosaurus! (1960), another cheap stop-motion animated revived dinosaur film of the era. All of that said, The Crater Lake Monster made money for Crown International when it was released.

The weak effects didn’t concern me much. The biggest issue for me is that the film is dreary. It is monotonously directed, edited and colour processed. The cast all feel like they are drinking buddies that the director recruited from the local waterhole. Far too much time is spent on comic-relief scenes with Glenn Roberts and Mark Siegel as two guys ripping tourists off to rent them boats and with Michael Hoover and Suzanne Lewis as a married couple on the way to Vegas where he swears he is going on the wagon. These scenes are accompanied by a carnival-type score, giving clear evidence that what is going on is not meant to be taken seriously.

William R. Stromberg never went on to make any other films. The one name on the credits that was heard from again was stop-motion animator Dave Allen who did regular work for Albert and Charles Band, including effects on films such as Laserblast (1978), Dolls (1987), Puppetmaster (1989), Robot Jox (1990), Subspecies (1992), Prehysteria! (1993) and numerous others, including even directing the Stone Giant segment of The Dungeonmaster (1984) and the full-length Puppet Master II (1990) for them. Elsewhere his work can be found in films as wide-ranging as The Howling (1981), Caveman (1981), Young Sherlock Holmes (1985), Willow (1988) and Honey, I Shrunk the Kids (1989), among others.