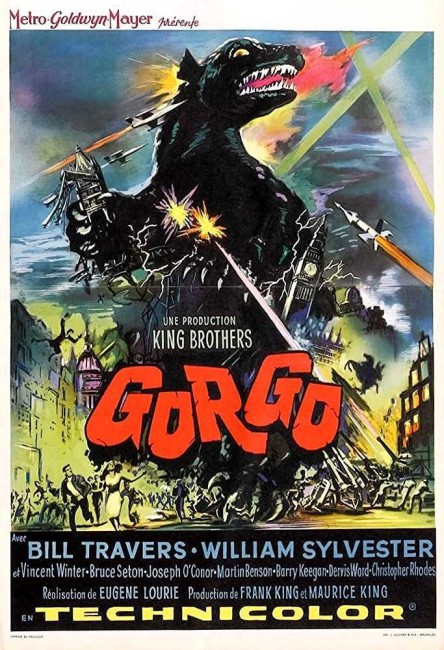 Joe Ryan and his business partner Sam Slade, the owners of a fishing trawler operating off the Irish coast, are witness as a dinosaur emerges from the ocean in the aftermath of a volcanic eruption. With their ship damaged in the encounter, they are forced to set ashore on tiny Nara Island. They are afforded a frosty welcome by the harbourmaster, the archaeologist McCartin, who they find is wanting to keep a trove of sunken treasure he discovered in the nearby deeps to himself. The dinosaur then emerges and rampages across the island but Ryan and Slade are able to capture it. They set sail back to England with the creature, which they nickname Gorgo. They decline the offer of scientists who want to study the Gorgo and instead accept the substantially better offer to exhibit it at Dorkin’s Circus in Battersea Park. There the creature becomes a source of great public fascination. The scientists then realise that the dinosaur is only an infant. Its parent emerges from the ocean and heads to London, destroying all in its path, in order to get its child back.

Director Eugene Lourie is a name of some genre interest. Lourie spent the bulk of his career as an art director and production designer, first in France and then in the US. Lourie only took the director’s chair on four occasions but each of these was a genre film. The first was The Beast from 20,000 Fathoms (1953), the Ray Harryhausen stop-motion animation vehicle about an atomically revived dinosaur amok in New York City. This was enormously influential in that it was the very first atomic monster film, something that rapidly became one of the most predominant 1950s fads, and created the great era of atomic monsters, revived dinosaurs and giant insects amok.

Lourie next went onto make The Colossus of New York (1958) about a scientist who transplants his son’s brain into a robot body. He was evidently in demand as a monster movie maker and was brought to England to make one further stop-motion animated monster movie with The Giant Behemoth/Behemoth the Sea Monster (1958), which was intended as a copy of The Beast from 20,000 Fathoms and is a weaker effort. With Gorgo, his last film, Lourie again went to London to make a revived dinosaur movie – although, unlike the other two, this is not an atomic monster film.

Gorgo was made at the behest of the King Brothers, two US producers who made a number of B Westerns in the previous decade and would subsequently make Captain Sindbad (1963). Lourie is also working with less resources in terms of effects budget than he was on his other dinosaur two films – where they created their dinosaurs via the time-consuming stop-motion animation process, here he resorts to the good old man in a monster suit as has been patented a few years earlier by Godzilla, King of the Monsters (1954). That said, Gorgo emerges as the best of Eugene Lourie’s dinosaur films due to the fact that it gives the rampaging monster story an entirely different spin and a surprise twist of sympathy.

One of the other bonuses about Gorgo is that it is the only of Eugene Lourie’s films to have been made in colour. Lourie has gone to shoot on the Irish coast and this lends itself to some visually impressive location photography. The characters are drawn somewhat better than usual in these films. Lourie creates some good set-pieces – Bill Travers’ descent by bathysphere and encountering the Gorgo in the depths; or the scene where the Gorgo is initially taken to London and manages to get free as they transfer it to the carnival. In the middle of the film, Lourie also does a fine job of integrating what is clearly footage of the British Navy on manoeuvres – this is certainly blended with opticals and original footage far better than it is in a comparable film like Invaders from Mars (1953).

When the invasion of London comes during the film’s last quarter, Lourie pulls off his best effects set-pieces – the demolition of the Tower Bridge; the mother Gorgo towering over Big Ben backlit by orange smoke, demolishing the clock as the military fire missiles at her. There is an enormous sense of convincing panic created as the monster starts trampling the crowds and people are forced to take refuge in the subway. Even though the effects are down around the level of the average late 1950s Godzilla film, you tend to forget it is a man in a monster suit and be impressed by the sheer spectacle on display. What we end up with is a superior monster movie.

The plot for the first half of Gorgo has been borrowed from King Kong (1933) – the monster that is captured and taken to be exhibited in the city whereupon it proceeds to escape and go amok. The touch that makes the film stand out is the revelation in the last third that the dinosaur they have captured is only an infant and that the mother has arrived to get her child back and is very angry. This gives an extra level of poignancy to the film – the final image the film goes out on with the mother and child by her side walking into The Thames as London burns around them is a beautiful one. It makes the antagonistic force of the film something strikingly different as opposed to a rampaging monster that only needs be exterminated by the forces of law and order.

The idea of the monster and its child was promptly borrowed by Toho for the Godzilla series in Son of Godzilla (1968) wherein Godzilla almost identically gained a son, although that was played as far more of a cutsie children’s film. A rival Japanese company stole the basic plot for their monster movie Monster from a Prehistoric Planet/Gappa the Triphibian Monster (1967).