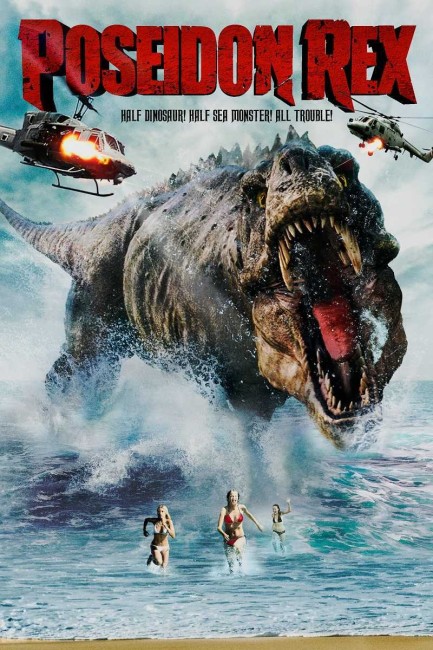 In Belize, American treasure hunter Jackson Slate is being pressured for money by armed thugs. He persuades them to dive on a hazardous underwater area known as The Blowhole to salvage the treasure of the sunken Spanish galleon The Cortez. However, the thugs detonate the explosives prematurely, knocking Jackson out. The explosion also serves to unearth a dinosaur from the seabed, which promptly devours the thugs and their boat. Rod and Jane, a visiting American couple on a diving cruise, find Jackson floating and he gets them to take him to marine biologist Sarah Jones to be patched up. He persuades them all to join him in returning to salvage the Cortez treasure. Instead, they discover dinosaur eggs there. Meanwhile, what Sarah terms the Poseidon Rex is devouring everything in the water and then emerges onto the land.

Poseidon Rex is a CGI monster movie. These have become legion throughout the 1990s/early 2000s – indeed, director Mark L. Lester had previously made another perfectly serviceable revived dinosaur film in this same vein with Pterodactyl (2005). In the last couple of years the CGI monster movie genre has gone in entirely unserious directions as perhaps best typified by the instant bad movie phenomenon of Sharknado (2013), which in itself was itself only the iceberg tip of a great host of other similar tongue-in-cheek monster movies. In most regards, Poseidon Rex is a formula B monster movie. However, it immediately sets itself above the rest of its ilk by dint of the fact that it is one of the few that is taking itself seriously.

Moreover, Poseidon Rex is operating with a, while not exactly reasonable, at least better than average budget than most of the other films that have no other ambition beyond being cable filler. If nothing else, it is better than the average B monster movie simply because it doesn’t look so cheap. The better budget has allowed the production crew to travel to Belize, which offers a sunny tourist locale and beautiful azure oceans. Moreover, it allows the crew to film underwater – even if the locations do nothing to approximate what is described as the dangerous and turbulent unexplored rift of The Blowhole.

The film also has a decent level of digital creature effects. While never stretching too far beyond the realm of the B movie, these are at least credible for the most part – the edges are obvious if you look too closely but are delivered effectively for what is required of them.