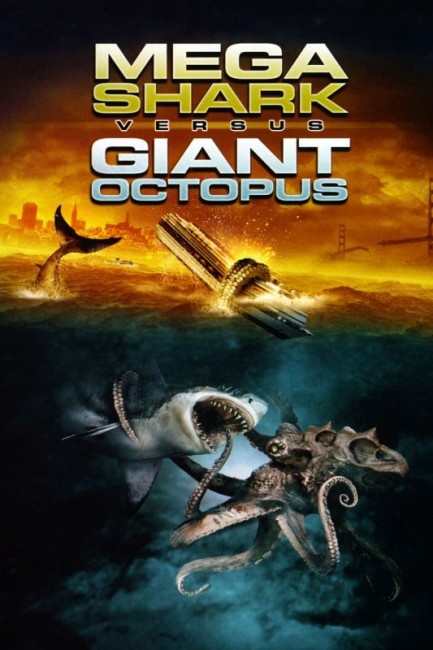 Marine biologist Emma MacNeil has conducted an unauthorized borrowing of her institute’s miniature submarine to follow a pod of whales into the Arctic. The US Navy detonates an illicit low frequency sonar device nearby, causing an iceberg to collapse, damaging the submersible. Soon after, shipping and naval vessels are being attacked by giant monsters. Emma examines a gutted whale washed up on a California beach. Her claim that it was bitten is dismissed by her superiors and she is fired after returning to remove a giant tooth from the whale carcass. She goes to see her old professor Lamar Sanders and they are later joined by Japanese scientist Seiji Shimada, where they determine that the tooth came from a megalodon – a giant prehistoric shark. They are then taken at gunpoint to Navy intelligence officer Allan Baxter who demands they find a solution to the attacks on shipping. Video footage from the submersible reveals that the sonar device unleashed the megalodon and a giant octopus that were frozen inside the ice. The three of them come up with various plans to stop the giant monsters before realising that the best solution is to allow them to continue their battle across the epochs and fight one another to death.

Mega Shark vs Giant Octopus was one of the films from The Asylum. The Asylum is a low-budget company that has come to specialise in ‘mockbusters’ – films with titles that sound similar to recent big-budget hits and arrive on videostore shelves at exactly the same time as the big-budget counterparts hit theatres in the hope that people will not look to closely when making their selection. Various of The Asylum’s ‘mockbuster’ titles include the likes of The Da Vinci Treasure (2006), Snakes on a Train (2006), AVH: Alien vs Hunter (2007), I Am Omega (2007), Transmorphers (2007), Allan Quatermain and the Temple of Skulls (2008), The Day the Earth Stopped (2008), 100 Million BC (2008), Sunday School Musical (2008), The 18 Year Old Virgin (2009), Almighty Thor (2011), Battle of Los Angeles (2011) and Age of the Hobbits (2012).

Mega Shark vs Giant Octopus is one of the few Asylum films that is not a mockbuster or imitating some other work. It is simply a B-budget monster movie – or at least monster movie team-up. The monster bash – wherein companies usually pitted their in-house monsters against one another – goes all the way back to Universal’s Frankenstein Meets the Wolf Man (1943) and Toho’s King Kong Vs. Godzilla (1962) and the more recent like of Freddy vs. Jason (2003) and AVP: Alien vs. Predator (2004).

The low-budget CGI monster movie took off during the 1990s after companies sought to climb aboard the success of Jurassic Park (1993). Some success was had by Boa vs Python (2004), which started the idea of pitching two giant monsters against one another, and was copied by other films such as Komodo vs Cobra (2005). Mega Shark vs Giant Octopus became a cult hit of its own (being the first Asylum film to obtain a theatrical release), largely based on its title, and led to a number of other copycat Mega vs _ titles from The Asylum, including Mega Piranha (2010), Mega Python vs. Gatoroid (2011), and other absurdities such as 2-Headed Shark Attack (2012), Blood Lake: Attack of the Killer Lampreys (2014) and the cult hit of Sharknado (2013) and sequels.

The basic set-up of prehistoric monster(s) thawed out from their frozen slumber in the Arctic has been borrowed from the granddaddy of all atomic monster films The Beast from 20,000 Fathoms (1953). Indeed, with the inclusion of a scene with a giant octopus attacking the Golden Gate Bride, which is copied from It Came from Beneath the Sea (1955), you get the impression at times that Mega Shark vs Giant Octopus is intended as a homage to the stop-motion animated films of Ray Harryhausen.

Without question, Mega Shark vs Giant Octopus has one of the great attention grabbing titles of all time. Alas, the film itself is a largely unmemorable affair that never rises to seem worthy of such a title. Expectedly, the digital effects are cheap and cut-price. Soon in, Mega Shark vs Giant Octopus reaches its moment of prize camp – one from which the film’s credibility never recovers – when we see an airliner flying through the sky and in one completely ridiculous moment the shark (which is the same size as the aircraft) jumps out of the ocean to snatch the plane in its jaws. It should also be said that this is one of the more competent of the effects shots.

The rest of the appearances of either the mega shark or the giant octopus look extremely cut-price – the attack on the oil rig and the naval ship seem to offer at most 1-2 optical shots or the appearance of only a claw or part of a jaw coming up to envelop the ship. The attack on the Golden Gate Bridge has a total of three shots featuring the giant octopus, for instance. At other times, the film has simply thrown in stock underwater footage, which leads to oddities such as seeing schools of hammerhead sharks (creatures that live in tropical waters) in the Arctic.

The most bizarrely funny part of the film are the climactic scenes trying to lure the mega shark and giant octopus in a submarine where the film creates wholly contrived reason for the submarine to have to venture through a narrow trench. This is relayed by some poor and murky visual effects depicting the submarine scraping through the trench and much in the way of shouted orders and faux dramatics inside, before the navigator (Dustin Harnish) rather laughably pulls a gun on the captain (Dean Kreyling) and demands to stop their progress. The funniest part of the scene is how all of the other naval officers seem paralysed when it comes to doing anything until Deborah Gibson steps up to punch the navigator out.

Mega Shark vs Giant Octopus‘s one piece of novelty stunt casting is former teen pop singer Deborah Gibson as the film’s marine biologist heroine. Then known as Debbie Gibson, she appeared in 1986 with a handful of hit singles (at age 16, she became the youngest female artist to ever have a No 1 hit single), although was largely forgotten even five years later. She made a string of minor acting appearances before being given her first lead role here. To her credit, Debbie/Deborah Gibson is okay in the part and never lets the show down. Lorenzo Lamas, who usually appears in action films, has an entertainingly tongue-in-cheek role as a hard-ass naval officer. Sean Lawlor offers reasonable support as the professor.