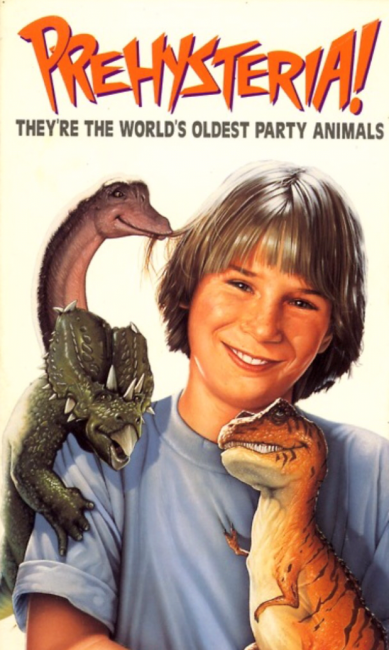 Rico Sarno enters a forbidden South American temple and steals five eggs. Back in the US, the cooler containing the eggs is accidentally taken from Rico’s museum/antique shop by the dog of raisin farmer Frank Taylor. Back home, Frank’s two children, Jerry and Monica, find the eggs and are amazed when hatch into five baby dinosaurs. They hide the dinosaurs from their father but Rico and two hoods then come determined to get the eggs back.

Prehysteria! comes from father and son Albert and Charles Band, the producing team behind B-budget production companies such as Empire and Full Moon. They have been responsible an amazing number of occasionally enterprising low-budget genre films, which include the Ghoulies, Trancers, Puppetmaster and Subspecies series. Prehysteria! was the premiere release of the Bands’ subsidiary Moonbeam label that was set-up to make direct-to-video releases for children.

The Bands’ films frequent exploit other big budget successes and Prehysteria! was made and released the same year as Jurassic Park (1993). It is an amazingly banal reduction of Jurassic Park. It is almost as though the Bands set out to make a children’s dinosaur film but were at a loss as what to do after setting the basic premise was set up. The film suffers from underwhelmingly banal horizons.

The drama is set around insipid things like the kids trying to hide the dinosaurs from their father, the foiling of the typically over-the-top villain, the father’s romance with the villain’s assistant. Certainly, in comparison to the film’s model Jurassic Park, the reduction of the triumphant power the dinosaurs had there to such insipid scenes where the kids sit around and name the dinosaurs after musicians (Elvis, Madonna, Jagger and such like) makes you cringe. (The naming of dinosaurs Paula and Hammer – after Paula Abdul and M.C. Hammer – show just how much of a fifteen minute flash in the pan either of those were, even when one is watching the film three years after it was made). Crucially, the dinosaurs never actually do anything in the film.

Worst of all though, Mark Rappaport’s toy-sized dinosaurs look like stiff puppets and are not the slightest bit convincing. On the plus side, some of the performances are okay – Austin O’Brien, who appeared in Last Action Hero (1993) the same year, makes a decent kid hero; Brett Cullen has a likeably warm charisma as the father; and best of all is Samantha Mills whose gradually mellowing cynicism is well done.