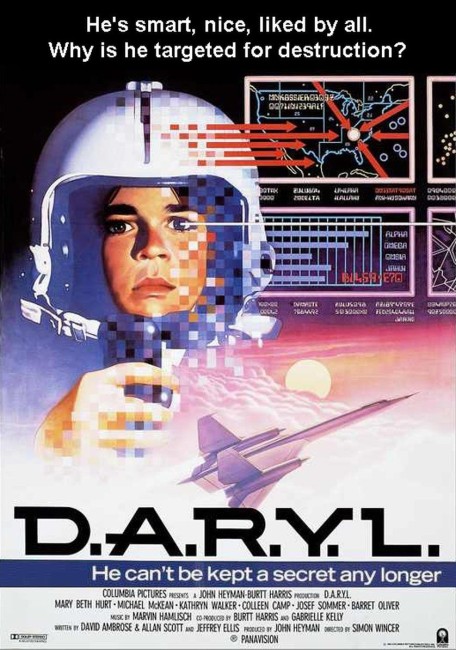 Following a car chase in which the driver is killed, a young boy is left abandoned on a roadside. He knows nothing about himself except that his name is Daryl. Efforts are made to locate his real parents. During this time, Daryl is fostered out to a childless couple Joyce and Andy Richardson to whom he proves a perfect child, never doing a thing wrong or out of place. Two people claiming to be his parents then turn up. In reality, they are scientists and it is revealed that Daryl is a computer placed in a human body, his name standing for Data Analysing Robot: Youth Lifeform. However, when the scientists return with him, the military decide that they want the project shut down and Daryl terminated.

D.A.R.Y.L. was one of the warm fuzzy sf/fantasy films that emerged in the 1980s following the success of E.T. – The Extra-Terrestrial (1982). It was directed by Simon Wincer, the Australian director who made the rather good Harlequin (1980) and has since made bland drek such as Phar Lap (1983), Free Willy (1993) and Crocodile Dundee in Los Angeles (2001), as well as a number of genre films (see bottom of the page).

D.A.R.Y.L. feels as if it has been slapped together from a constructor set scenario for children’s science-fiction film themes. It manages to rehash about every cliché that had been established in every genre film from the preceding five years – the benevolent super-powered visitor, the military heavies, cross-country chases a la Starman (1984), the false death and resurrection scene a la E.T., the theft of the hi-tech military plane a la Firefox (1982). It feels like a film made up of 100% artificial ingredients. Even the titular acronym seems strained.

Certainly, the first half of the film is the better where it is conducted with a mild degree of pathos. There is a good performance from twelve-year-old Barret Oliver who first emerged to attention in The Neverending Story (1984) and Cocoon (1985) the same year as this and seemed on the verge of becoming a child star but completely vanished after 1989. He has since emerged as a printer and photographer and an expert on 19th Century printing processes, having written a book on the subject.

The first half of the film gets by as a passable children’s film in this regard. Alas, the latter half descends into ludicrousness with ridiculous car chases with the boy driving vehicles on two wheels, even more credibility-lacking aerial pursuits in jet fighters and a cop-out resurrection sequence that evaporates any shred of interest or believability.

Australian director Simon Wincer made a number of other genre films, including the stalker thriller Snapshot (1979), the fascinating Harlequin (1980) about an enigmatic magician, the Cyberpunk biker film Harley Davidson and the Marlboro Man (1991) and the comic-book superhero adaptation The Phantom (1996).