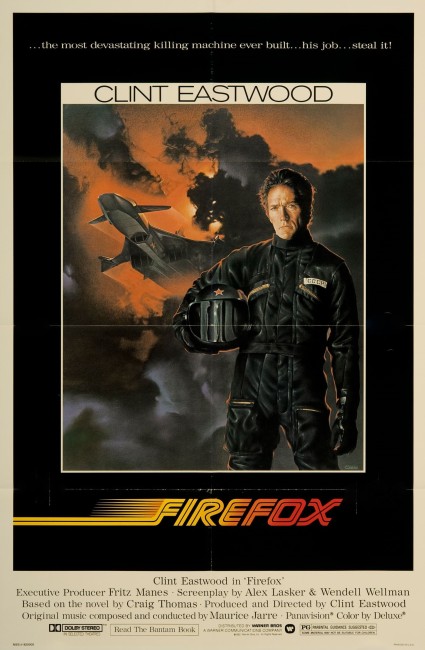 Former Vietnam fighter pilot Mitchell Gant is living in seclusion, following a nervous breakdown. He is called back to service by the US government for a top-secret mission. They want him to travel into the Soviet Union and steal the experimental Firefox fighter plane, which has been built for Mach 6 speeds, is invisible to radar and has a thought-controlled missile guidance system. Gant is given false identity papers and flown into Moscow where he is to be smuggled across country to the airfield by the Russian underground. However, as the plan progresses, things start to unravel.

Clint Eastwood first emerged as a Universal bit player during the 1950s and then gained recognition as a regular on tv’s Rawhide (1959-66). Eastwood then went to Italy where he starred in a series of classic Spaghetti Westerns – A Fistful of Dollars (1965), For a Few Dollars More (1966) and The Good, the Bad and the Ugly (1967) – and perfected the role of the tight-lipped, monosyllabic Man With No Name. These and a handful of English-language Westerns made back in the US – Hang ‘Em High (1968), Coogan’s Bluff (1968) – and war films such as Where Eagles Dare (1969) and Kelly’s Heroes (1970) – propelled Eastwood to a big-name box-office star. However, it was with the starring role in Dirty Harry (1971) that Clint Eastwood found the part that he became identified with forever after.

By the early 1970s, Clint Eastwood’s star had become big enough that he could use his clout to make his debut as a director, which came with the psycho-thriller Play Misty for Me (1971). By the end of the 1970s, Eastwood was regularly topping the list of No. 1 stars in the world and was appearing in hit after hit with the various Dirty Harry sequels, Escape from Alcatraz (1979) and Every Which Way But Loose (1979). Less effective seemed to be the occasions when he stepped behind the director’s chair. Here the results – the excellent Western revenge fantasy High Plains Drifter (1973), The Eiger Sanction (1975), the acclaimed Western The Outlaw Josey Wales (1976), and peculiarities like Bronco Billy (1980), Honkytonk Man (1982) and White Hunter, Black Heart (1990) – found only middling audience reception. The sole exception was the fine action film The Gauntlet (1977).

For the first two decades of his directing career, the critical establishment largely ignored Clint Eastwood, even when he made such noteworthy films as Bird (1988). It was not until he deservedly won the Academy Award for the stunning anti-Western Unforgiven (1992) that he began to be taken seriously. Since then, Eastwood has matured considerably as a director with thoughtful and intelligent works such as the superbly underrated A Perfect World (1993) and the persistently intelligent likes of The Bridges of Madison County (1995), Midnight in the Garden of Good and Evil (1997), Flags of Our Fathers (2006), Gran Torino (2008), J. Edgar (2011) and the Academy-nominated likes of Mystic River (2003), Million Dollar Baby (2004), Letters from Iwo Jima (2006), Changeling (2008), Invictus (2009) and American Sniper (2014).

Before this, Eastwood had a problem finding respectability and his directorial outings tended to be dismissed along with consideration of him as an actor. Largely, one suspects, it was that he was associated with action movie roles, usually of a right wing bent, and tended to be seen as an actor of limited range. It is worth comparing the predominantly negative reception that Firefox received when it came out with Eastwood’s later return to the same hard-science techno-thriller genre with Space Cowboys (2000). While Space Cowboys is an amiable but far lesser film than Firefox, it received likable reviews as Eastwood had become critically accepted by that point in time, whereas the much superior Firefox was dismissed as uninspired in comparison.

Firefox is one Clint Eastwood film that is seriously worth critical re-evaluation. The first three-quarters of the film is one of the best Cold War thrillers of the 1980s. Adapting Craig Thomas’s 1977 novel closely, Eastwood does an excellent job at twisting the plot with a claustrophobic sense of mounting paranoia. He continually cuts back and forward between the progress across the country and the pursuing Soviets as they slowly piece together the pieces of the puzzle in a way that keeps the suspense hanging on a knife-edge.

The film evokes a sense of paranoia about the implacable power of the KGB that probably existed far more as a myth in the eyes of conservative America and thriller writers than it ever did in actuality, but rarely has the obdurate implacability of the police state been evoked with such a sense of omniscient paranoia as it is here. Eastwood, photographer Bruce Surtees and the production design team do a superb job of recreating Moscow with various locations in Vienna standing in for the real thing.

It is the last quarter, where the Firefox takes to the air and with a Russian pilot in pursuit in a second plane, that Firefox finds its wings. The effects work here was supervised by John Dykstra. Dykstra shows what the dogfights that he supervised for Star Wars (1977) would have been like with greater scientific accuracy. The races at Mach speed down canyons, across icepacks, twirling through clouds, across the ocean surface dragging half-mile funnels of snow and water, and the intensely suspenseful landing on the ice sheet at sea are immensely exciting. (If possible, see the film on the wide screen as opposed to video where half the seat-edge effects are lost. Watching these scenes on the big-screen back in the film’s original cinematic release, the result was utterly exhilarating). The matte black, sleek, gleaming shape of the Firefox looks stunning – the first view we get of it with its linear beak nose jutting out of its hangar is fabulous.

In the lead role, Eastwood never strays far from his usual stoic persona – in fact, he seems more wooden than usual and out of his depth trying to portray a shell-shocked Vietnam Vet coping with post-traumatic stress. There is excellent support from Freddie Jones as the prissy, velvet-voiced British intelligence specialist and Stefan Schnabel, who proves a considerable scene-stealer in his scenes as the blustering First Secretary during the latter half.

Firefox has also served for a number of other action films about the theft of technologically advanced fighter planes, including the likes of Blue Thunder (1983), Airwolf (1985), Black Thunder (1998) and Flight of Fury (2007).

Clint Eastwood’s other films of genre interest are:– the female stalker film Play Misty for Me (1971); the supernatural avenger Western High Plains Drifter (1973); the oldsters in space film Space Cowboys (2000); the psycho-thriller Blood Work (2002); Changeling (2008), a true-life story about a missing child, a police cover-up and a serial killer; and the afterlife character drama Hereafter (2010). In acting appearances, aside from most of the aforementioned, Eastwood has appeared in Revenge of the Creature (1955), Tarantula (1955), the talking mule film Francis in the Navy (1955), the twisted Southern Gothic horror The Beguiled (1971), up against a serial killer in his most famous role Dirty Harry (1971), the S&M psycho-thriller Tightrope (1984) and the Dirty Harry film The Dead Pool (1988).