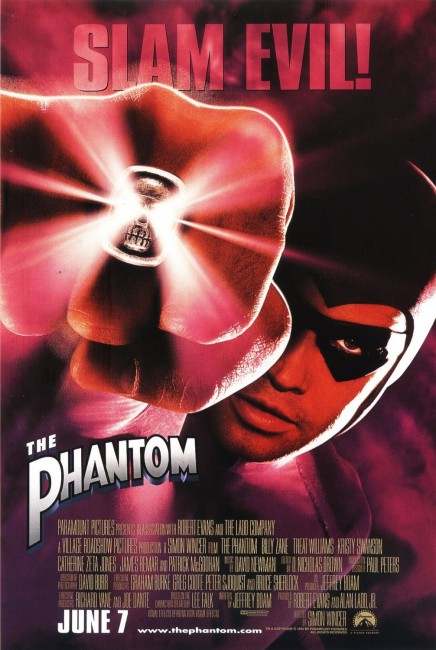 400 years ago, a young boy sees his father killed by the pirates of the Sheng Brotherhood. He jumps overboard and is washed up on the shores of the Bengala jungle. There he is adopted by the natives and undergoes a ceremony to become the first Phantom, a masked and costumed mystery man who protects the region. In 1938, the present and 21st Phantom Kit Walker pursues members of the Sheng Brotherhood. The Brotherhood is determined to find the two Skulls of Togando that when brought together will allow the possessor great power. At the same time in New York City, journalist Diana Palmer comes up against ruthless entrepreneur Xander Drax who commands the Brotherhood and determines to expose him. This places her life in danger but she is saved by The Phantom. As they race to prevent Drax from obtaining the last skull, she and Kit become attracted to one another.

The Phantom is possibly the most popular non-comedic syndicated newspaper comic strip of all time. The Phantom was the creation of Lee Falk, a 23 year-old advertising copywriter from St Louis, Missouri. Originally, Lee Falk saw comic-book writing as a sideline to fund his desire to break into theatre. In 1934, Falk created the character of Mandrake the Magician for King Features Syndicate, which went onto equally popular and long-running success. King Features then pressed Falk to come up with another creation and The Phantom was born. The Phantom premiered in syndication in 1936 and still runs to this day. With The Phantom, Lee Falk in fact created the first superhero, predating the likes of Superman and Batman. Falk wrote every episode of the daily strip from 1936 and still continued to even on his deathbed in 1999 – a phenomenal run of more than sixty years. Falk also drew the first few strips but then stepped back to writing tasks only. Numerous artists have worked on the strip over the years – including at one point, Italian film director Federico Fellini who wrote an unauthorized Phantom strip when Mussolini suspended import of the American strips during World War II.

The Phantom has been intermittently incarnated in the media. There was a fifteen chapter Columbia serial The Phantom (1943) starring Tom Tyler, which is favourably regarded by serial fans. The character was incarnated into two animated series, Defenders of the Earth (1986-7) where The Phantom joined several other King Features heroes – Mandrake, Flash Gordon and their various siblings – in battling Ming the Merciless, and Phantom 2040 (1994-6), which concerns the activities of the Phantom’s son in a Cyberpunk future setting.

This big-budget adaptation came out in the midst of the mid-1990s big screen superhero revival following the Tim Burton Batman (1989). Here at least is one screen adaptation of a comic book where fans of the original have no reason to complain. Purists will no doubt quibble about the Phantom’s lack of striped underwear and why he has strange tattoos on his tights but the rest of the mythos is there on screen – from Devil the Wolf to the Sheng Brotherhood, Skull Cave, the skull-crested ring and The Phantom origin story. And it has all been very nicely mounted. The 1930s period sets look handsome and there is some lovely location photography in Thailand.

Why then does The Phantom not work? The film has all the elements of a grand serial-styled adventure – exotic jungle locations, a quest for mystical artefacts, pirates, a feisty girl reporter love interest and a masked hero. It clearly seeks to emulate the high-adventure thrills of the Indiana Jones films. Yet for all its high adventure ambitions, the elements of the plot never seem to come to life. There feels something dreadfully predictable to the film’s moves – the villain naturally takes the heroine prisoner (in fact, she rarely seems to spend any other time in the film except being taken prisoner); naturally the plane’s fuel tank gets holed by bullets after takeoff; the pirate island has to go up in a volcanic eruption at the climax; while the quest for the skulls is only something there to hang the rest of the plot on.

Crucially, the action never gets terribly exciting. There is a decent set-piece with Billy Zane trying to save a young boy caught in a truck hanging upside down from a rope bridge and an okay sequence jumping from a biplane onto horseback but no more than that. The climax with the hero and the villain waving coloured beams of light at one another is incredibly wimpy. What The Phantom needed was something that approached the visceral kinesis of the venture into the Chacopayan temple in the prologue to Raiders of the Lost Ark (1981).

The most fun to be had in the film comes from watching the actors cast as the villains chewing the scenery. Treat Williams overacts terribly but he is the one in the film who seems to be having the most fun. One also rather liked Catherine Zeta Jones’s bad girl flier who smoulders with innuendo – this was well before Zeta Jones became an A-list star and married Michael Douglas – although the film does an appalling job of ‘redeeming’ her at the end. In comparison, the people on the side of good are a terribly bland lot – good girl Kristy Swanson projects no personality on screen.

The impossibly handsome Billy Zane holds up well in the action scenes but offers absolutely no depth to the character. This is largely the reason The Phantom does not work. The way that the Tim Burton Batman revolutionised the modern comic-book screen adaptation was to take the masks and the costumed villains down into dark emotional recesses where the heroes and villains were not just characters on their way to a fancy dress party but driven by psychological necessities.

Unfortunately, The Phantom fails to take Batman‘s lesson and whatever lies behind The Phantom’s mask remains an enigma – we learn nothing about what drives The Phantom, he is just a guy in a mask. Billy Zane smirks handsomely but there is no feeling that there is a real person there. This Phantom comes exactly like a serial hero where their stolid presence on screen was meant to convey heroism simply by dint of their being placed there and where any characterisation of their stolidity was regarded as extraneous.

That unfortunately is the crucial failing of The Phantom – without going behind the mask, the film is merely an old-fashioned adventure film of stolid black-and-white divides. Understandably, not too many people seemed interested in going to see the film and it died at the box-office. Although what killed it could equally have been the lame advertising campaign – a poster with The Phantom punching the screen and the deadening byline of “Slam Evil!”

A further film version of The Phantom was announced over the next decade, which finally emerged as The Phantom (2009), a film for the Sci-Fi Channel starring Ryan Carnes, which made the drastic mistake of trying to modernise The Phantom and in so doing throwing all the familiar elements of the comic-strip out.

The Phantom was an Australian co-production (Australia is apparently the country with the highest Phantom readership in the world). Australian director Simon Wincer also made films such as Phar Lap (1983), the tv mini-series Lonesome Dove (1989) and Free Willy (1993), as well as the genre likes of the psycho-thriller Snapshot/The Day After Halloween (1979), the fascinating Harlequin (1980) about an enigmatic magician, the children’s film D.A.R.Y.L. (1985) about an android boy and the Cyberpunk biker film Harley Davidson and the Marlboro Man (1991). Screenwriter Jeffrey Boam has also written the genre likes of David Cronenberg’s adaptation of Stephen King’s clairvoyance thriller The Dead Zone (1983), Joe Dante’s Innerspace (1987), The Lost Boys (1987) and Steven Spielberg’s Indiana Jones and the Last Crusade (1989), as well as the scripts for the first two Lethal Weapon sequels and created the tv series The Adventures of Brisco County, Jr. (1993-4), a Western with SF elements. The film was Executive Produced by Joe Dante, director of The Howling (1980) and Gremlins (1984), who laboured for a number of years to bring his own adaptation of the strip to the screen.