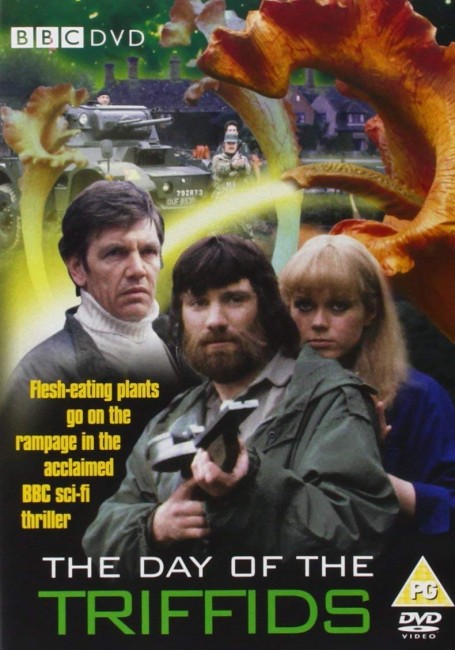 Bill Masen is in hospital for eye surgery after an acid burn caused by the triffids that he farms. Triffids are a species of plant that emerged from the Soviet Union in the 1960s and were soon harvested because of their production of oil. The triffids are also ambulatory and contain a deadly sting that can kill humans, whom they regard as food. Sitting in a hospital with his eyes covered by bandages, Masen becomes aware that something is wrong. He removes his bandages to discover that everyone else in the hospital and outside in the streets of London has been blinded. As he picks his way through the chaos, he realises that the blindness has affected everyone who viewed a comet that appeared in the sky during the time his eyes were bandaged. He joins forces with another sighted woman Josella Payton. He and Josella try to stay together as they become caught up amongst the various sighted factions that rise to the fore, each with their own different idea about what must be done. However, the crisis has also served to unleash the triffids, which use the opportunity to hunt the blinded populace with ease.

John Wyndham was a British science-fiction writer who came to prominence in the 1950s with works like The Day of the Triffids (1951), The Kraken Wakes (1953), The Chrysalids (1955), The Midwich Cuckoos (1957) and The Trouble with Lichen (1960). Wyndham specialised in novels where everyday middle-class Britain (of the 1950s and 60s) faced an overwhelming catastrophe. Unlike American pulp science-fiction of the 1940s, John Wyndham’s books did not feature vast science-fictional devices or technologist heroes coming up with ways of saving the day at the last minute, but were about ordinary everyday people coming to terms with disaster. Wyndham has become probably the most famous British science-fiction writer next to H.G. Wells and one of the few whose works are read in schools. The Day of the Triffids is John Wyndham’s best known work. It was poorly filmed as The Day of the Triffids (1962), which stripped the sociological element and made the book into merely an end of the world movie about killer plants on the loose. This three-hour BBC mini-series, which originally screened in six half-hour parts, is an extremely faithful reworking of the novel.

The very tv nature of the mini-series gives The Day of the Triffids a quiet manneredness that is entirely removed from Hollywood end of the world movies. The series is shot with plain lighting and non-melodramatic effect. (More than anything, one suspects that the remake of The Day of the Triffids was inspired by the success a few years earlier of the British tv series Survivors (1975-7), a very Wyndham-esque tale about ordinary people trying to survive in the aftermath of a plague that has wiped out most of the world and where the survivors have fragmented into diffuse, self-contained and often warring communes).

The contrast is no better demonstrated than placing The Day of the Triffids up against the film that came out the same year – Mad Max 2 (1981), which revolutionised film treatment of the post-holocaust and turned the venue into an action movie setting, a vision that could not be further removed from the sober, social perspectives that The Day of the Triffids takes. The same basic idea was later substantially used by tv’s The Walking Dead (2010– ).

As in John Wyndham’s book, the Day of the Triffids mini-series is all about the attitudes with which people confront catastrophe. The story contrasts different perspectives and viewpoints – Stephen Yardley’s ordinary man pleading with John Duttine to stay and help them and ignore the rest of the world; the emergence of the utilitarian group that proposes that only the seeing be taken in and the others abandoned and that all sighted men must take three wives; Coker’s quasi-Communistic society with their ardent belief in the arrival of help from elsewhere and where the seeing are forced to help the blind by being handcuffed to them in chain gangs; Tynsham, which represents naive Christian do-gooder ethic in the face of all reasonable practicalities; the junta that establishes rule by militia and begins allocating the resources. Wyndham saw the best solution as the final establishment of Coker’s society on the Isle of Wight that approaches everything modestly and realistically, rather than with grand ideals.

The mini-series manages to depict the devastation and holocaust with a superb economy and effectiveness. Nothing suggests the placidity of English society rent asunder than the simple image of the streets of London deserted and a bobby’s bicycle overturned. The opening episode is a marvellous piece of scene setting. John Duttine lies in a hospital bed with his eyes bandaged, while his voice comes over on the soundtrack: “Most of the time the noise of the traffic is so loud you need earplugs just to hear yourself think. And as it doesn’t stop until around midnight, that means it must be the silent, early hours,” as the camera pans around to contradict this and show that it is clearly daytime. It is a marvellous scene that immediately gives an abrupt sense of wrongness. This is followed by a growing sense of panic – Duttine realising it is 7:50 am and wondering why nobody is coming; the panicking patients in the other beds; the glimpses of the chaos outside and then Duttine finally encountering his doctor (Jonathan Newth) who is now blind. It is at that point that the episode ends – aside from some flashbacks explaining the nature of the triffids, the entire first episode is taken up with the discovery of the rest of the world now being blind.

The mini-series is filled with tiny vignettes that give an edge into the shock and brutality that the abrupt lifting of social sanctions entails – Emma Relph going to help a blind man but being grabbed and later found tied up and beaten to be forced to act as his seeing slave; blinded soccer hooligans all in a line grabbing and forcing their way with a girl; the chaos caused with blinded people breaking into stores and scrabbling for food. There is no better image of futility than that of a blind woman sitting on the street trying to open what she thinks is a box of food that we see is labelled soap powder.

The best scenes come during the fourth episode where John Duttine is handcuffed to a team of blind people and we see the sheer frustration of him trying to organise them to make food deliveries, which is compounded by gangs shooting in random sprees and then an outbreak of plague. There is an extraordinary heart-wrenching poignancy to the scene where one of the blind girls is sent to give herself to John Duttine in the hope that he will not abandon them as the plague sets in. These scenes have the best writing in the entire series. Coker’s speech in the last episode about the necessity of rebuilding and community is also excellent. It makes this version of The Day of the Triffids one of the best of all post-holocaust stories on film in terms of asking penetrating social and moral questions about issues of survival.

The triffids themselves are wonderfully nasty creations and have a constant sinister threat, always lurking in the background throughout. There is also an unusual percussive atonal score.

There was a further tv remake of the story with the disappointing The Day of the Triffids (2009), a three-hour mini-series from the BBC with Dougray Scott as Bill Masen and Joely Richardson as Josella, which widely departed from the John Wyndham book.

Other adaptations of John Wyndham’s works include Village of the Damned (1960), from Wyndham’s The Midwich Cuckoos (1957), which was remade as Village of the Damned (1995); the alternate world film Quest for Love (1971), which was remade as the tv movie Random Quest (2006); the children’s tv series Chocky (1984) about an alien visitor; and the tv mini-series The Midwich Cuckoos (2022).