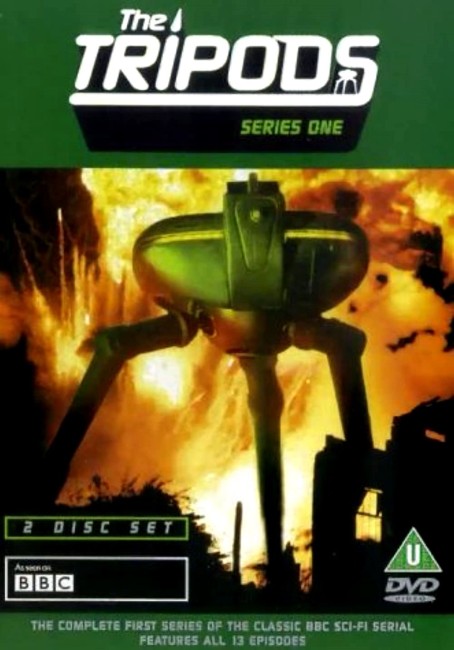 It is the year 2069. Earth has been conquered by large three-legged alien machines known as Tripods. Humanity is kept subjugated with Caps, devices placed on the head on the sixteenth birthday that control thought and pacify the population. In the sleepy English village of Wherton, blacksmith’s son Will Parker nears his sixteenth birthday and does not look forward to Capping. He meets Ozymandias, one of the Vagrants – people whose Caps have failed leaving their minds wandering. Ozymandias reveals to Will that his Cap is a fake and tells how he travels the country looking for youths to join the rebellion of the Freemen in the White Mountains of France. Will decides he wants to go to the White Mountains. His cousin Henry insists on coming and they set out, following a map drawn by Ozymandias. They smuggle across the channel into France, joined there by a French boy Jean-Paul ‘Beanpole’ Deliet. On the way, Will is injured and they are granted refuge at a chateau where he is quickly adopted as the favoured son of the Count de Ricordeau and falls in love with his daughter Eloise. Other adventures befall them as they visit the ruins of the great cities and try to avoid pursuit by the Tripods and their human enforcers the Black Guards.

The Tripods was a British tv series of the 1980s. It was based on a series of books by John Christopher (real name Samuel Youd) (1922-2012), a British writer in the John Wyndham tradition who started to specialise in children’s books during the 1960s. The Tripods trilogy consist of the books The White Mountains (1967), The City of Gold and Lead (1967) and The Pool of Fire (1968). After the airing of the tv series, John Christopher also wrote a prequel When the Tripods Came (1988), describing the initial invasion and the establishment of the Freemen. The Tripods trilogy remains Christopher’s best-remembered works. His most famous other novel was The Death of Grass (1957), which was filmed as Cornel Wilde’s violent tale of social collapse No Blade of Grass (1970).

The Tripods tv series was mounted as a co-production between the BBC and two Australian tv networks. The first season (reviewed here) was a reasonably faithful adaptation of The White Mountains, while the second season, listed here as The Tripods [Season 2] (1985), adapted The City of Gold and Lead. A third season would have adapted The Pool of Fire wherein the resistance starts the fight back against the Tripods dominion but the show was cancelled. The cost of the two series was cited as the reason for this, along with BBC head Michael Grade’s desire to stop producing science-fiction shows – the long-running Doctor Who (1963-89) was also cancelled by Grade around the same time. In the 00s, a big screen version of The Tripods was announced, purportedly to be helmed by Alex Proyas, although nothing seems to have emerged of this.

The series certainly comes up with an epic, attention-grabbing opening. It has the same shuddery feel you get when the Star Destroyer rumbles over your head in Star Wars (1977) for the first time. We see the villagers all lined up, the new postulant for Capping taking his hat off to reveal a shaved head beneath (this was well before shaved heads were fashionable and the effect was unusual), followed by a giant metal foot appearing over the camera and plunging into the stream that runs through the village, then the Tripod emerging into view and towering over the village, the inductee being whisked away by a mechanical arm and taken up into the emerald green maw of the Tripod and returned sometime later with the gold metallic Cap on his head. (One has to remember that 1984 was also a time when nobody had seen a faithful screen adaptation of H.G. Wells’ The War of the Worlds (1895), from which John Christopher clearly drew his vision of the Tripods, and the effects of the tripedial machines striding across the landscape was striking and unique). This immediately segues into Ken Freeman’s bold, thrumming score as the series title appears in giant embossed relief caps. It was something that plunged us into a different world in visually striking terms and presaged well for what was to follow.

The Tripods is well above the level of the average children’s tv series (although these days it would be labelled as Young Adult). It has an intelligent and well-presented scenario and moreover never talks or writes down to its target audience. The story has been somewhat padded over the original The White Mountains book, which only runs to around 200 pages. At thirteen half-hour episodes, the story is now filled out with several picaresque encounters – Will and Henry being shanghaied at sea, their escape from jail with Beanpole, Will’s romance in a chivalric court, more romance in the French wine-growing provinces.

The Chateau Ricordeau scenes become the opportunity for the series (and John Christopher) to indulge in a fantasy of feudal idealism – one that seems to involve a benevolent aristocracy and a placid and happy serf class (with the Tripods’ presence apparently having eliminated all the economic exploitation that happened during the historical Middle Ages) and where a commoner can become a lord merely by winning the good favour of an aristocrat. The series pumps all of this up with images of dreamy countrysides, of Will and Eloise drifting on the river in a boat, and much in the way of pageantry and jousting.

The story arc of the series is essentially a bildungsroman – see Coming of Age Stories. The constant theme throughout is of the hero having to reject the perfect settled down life (where Capping becomes a symbol of conformity) in favour of intellectual freedom. Throughout the series, Will must abandon his family and make a choice between love and being adopted as the son that would make him an heir to an aristocratic position and lands, while Henry and Beanpole also face the temptation of settling down in rustic harmony in a Provencal vineyard with a family of girls. The story sees that each of these ideals of domestic conformity comes with an ever-present threat at the margins – of The Tripods and Black Guards waiting to put a Cap on them and cause them to lose their individuality and creativity and in Beanpole’s case a genius intellect. The story is a picaresque that has the trio moving from one situation to the next and the overall realisation that accepting any settled down comfort is a trap that stands in the way of freedom.

There are the odd moments of the series that does not make sense. John Christopher was always a little vague about what Capping actually does and the series is stuck with the same problem. The Cap seems to sap human creativity and willpower and make people docile and loyal to the Tripods, yet at other times throughout the series we see people who are Capped acting venally (Duc de Sarlat, the boat crew) or capable of independent thought and creativity (Count de Ricordeau, Madame Vichot) so what it is the Caps do tends to shift about depending on the dictates of the story. In the second series, The Cap even goes so far as to grant immunity from all disease.

John Shackley was a performer with a limited range. He was adequate for the role but eventually Will became a dull character. As Henry, Jim Baker plays with a cross and perpetually grumpy expression. The most interesting and complex character of the series is Beanpole, given an excellent playing by Ceri Seel that rings with intelligence and quirky curiosity. (Disappointingly, Ceri Seel never went onto act again and these days has become a Buddhist devotee and works as a teacher).

The series has been beautifully filmed across perfectly bucolic English countrysides and French provincial landscapes, which make perfect contrast to the images of the Tripods striding through in the backgrounds. (There is certainly more of H.G. Wells’s War of the Worlds here than we ever saw in The War of the Worlds (1953), the George Pal produced film adaptation). We also get a handful of scenes passing through a devastated Paris with Will, Henry and Beanpole wondering about the purpose of things like cars – “There’s nowhere to harness the horses.”

The Tripod effects are generally extremely convincing and well integrated into the background. They have an occasional spottiness up against today’s more polished effects work, usually when the Tripods are required to do much more than be a presence – the sequence where the trio down a Tripod with a grenade, while well staged, is probably the least satisfactory from an effects standpoint. The surprise about the series is how the Tripods remain figures kept fairly much to the background – of course that would change with the much superior second series, which ventured inside the Tripod city to meet the aliens that inhabit them.