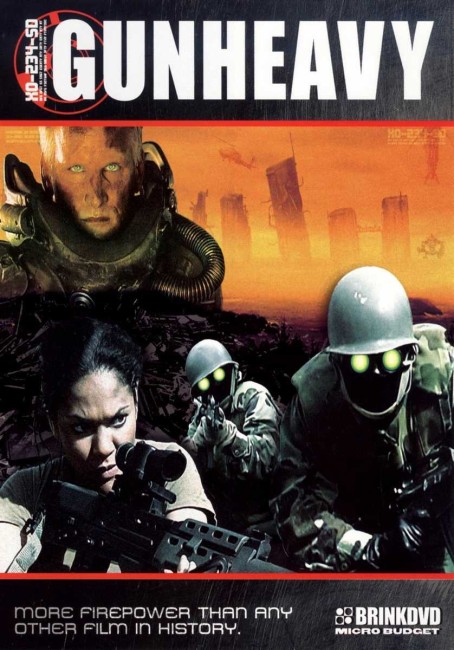 It is in the future after the collapse of civilisation. A group of rogue soldiers led by Major Dane Grenner steal a Frame, a giant robotic war machine, from the Republican Commonwealth. Captain Kurt Decker is assigned to lead a five-man team into the jungle to get it back, even though he and his team are kept in the dark about what the machine is.

Gunheavy is a low-budget film from novice director Angelo Lopes. It is immediately apparent from the point that Gunheavy opens that it is different to other low-budget independently made films. The film is conceived around a determination to depict realistic military combat. The scenes with characters in the midst of firefights have a brutal realism as opposed to the sort romanticised by action movies.

The film comes with a density of gritty detail – you can see the sweat on the soldiers’ brows, the twitchiness of their expressions as they look into the end of a gun barrel. The film bristles with military equipment – the dvd cover makes the brave boast the Gunheavy contains “more firepower than any other film in history”. It is as though Angelo Lopes has throw us into the midst of a Counterstrike game – but one that was cast with real marines and was being shot with a documentary camera.

All of which is most impressive for a low-budget film like this. The special effects vary between some occasionally obvious but never less than professional background digital inserts and some excellent scenes with the Transformer-like Frame in action. I would love to see what Angelo Lopes could do given a studio film as you are sure that this kind of determined intensity would result in some amazing things were he given the opportunity to play with a bigger budget.

That however does bring us to the minus points about Gunheavy. That it is an entree film made with considerable directorial assurance one doesn’t want to detract from. The main problem is that Gunheavy comes without much in the way of a clear plot. It is frequently difficult to work out which of the four different groups of soldiers running around shooting each other up is which and what each individual group is supposed to be doing there. It is never specified who the group of rebels that the commandos encounter are or indeed what they are rebelling against, nor for that matter who another group flitting around the background that are held up at gunpoint by the rogue soldiers are meant to be. Some background exposition or even a few title cards at the start would have helped proceedings to no end.

Gunheavy is also frustrating when viewed as a science-fiction film. The future that we are in – one that entails the collapse of society into what appears to be small autonomous pockets of civilisation – is sketched out in minimal detail. Nor do we get any insight into why the Frames went amok or what the group of rogue commandos were attempting to do in stealing one. Much of the film is set around the acquisition of The Frame – it does turn up at the end but only clomps about for a handful of shots before being blown up by a satellite beam (fired by whom it is never clear).

The problem ultimately is that Gunheavy has been conceived around the depiction of military manoeuvers to the exclusion of almost all else. Which is why one would like to see Angelo Lopes work on a studio-backed effort with a decent budget that could give freedom to his undeniable skill, while possibly allowing someone else to provide a script to better support the show. Still, Gunheavy is a debut film that bristles with a promise that shows Angelo Lopes has a future ahead of him.

Angelo Lopes is next set to return with another military science-fiction film Wastelander (2018).