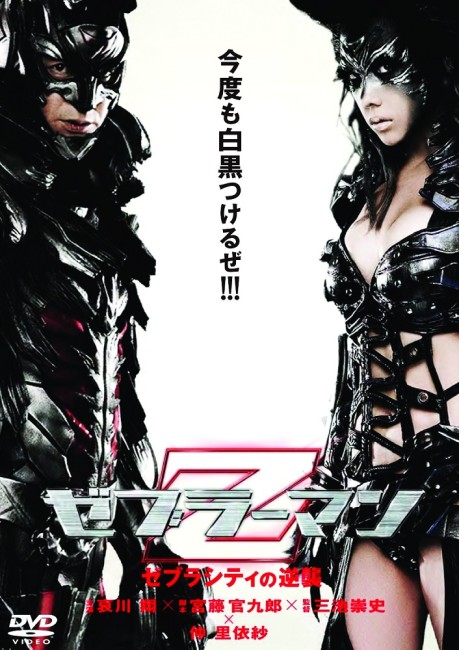 Shinichi Ichikawa has become world famous after defeating an alien invasion as the superhero Zebraman. He then wakes up in the year 2025 with amnesia and no memory of who he is. Tokyo has become Zebra City. Mayor Kozuo Aihara has instituted Zebra Time where all crime is legal for five minutes during which his Zebra Police attack all and anybody. The mayor’s daughter Yui performs on tv as the Zebra Queen. Ichikawa is found by Junpei Ichiba who played the role of Zebraman in the original tv series, Junpei takes Ichikawa to a refuge for the victims of Zebra Time beyond the city walls run by Ichikawa’s former pupil Asano who is now a doctor. There they try to help Ichikawa regain his memory. During the course of this, Ichikawa finds that a scientist conducted an experiment to remove his shadow self and that this dark half became Yui. As Yui eliminates Mayor Aihara and claims all power, wanting to export Zebra Time around the world, Ichikawa tries to regain his Zebraman powers to stand against her.

Japan’s Takashi Miike has become regarded as a cult director. Miike made a name for himself in the early 2000s with films like Audition (1999), Ichi the Killer (2001) and Visitor Q (2001) that were celebrated by audiences because of the ultra-violent and taboo-defying extremes he pushed the material. Miike has been prolific since the early 1990s, putting out 3-4 films per year, sometimes twice that.

Zebraman (2004) was Takashi Miike’s venture into the Superhero Film, an oddity in which Sho Aikawa is a mild-mannered schoolteacher who puts on the costume of Zebraman, the superhero from a 1970s tv series, and then finds he has superpowers and uses these to fight off alien invaders. Despite the film’s lack of box-office success, Miike for reasons that seem apparent only to him returned six years later to make a sequel here.

I don’t think Takashi Miike made a terribly interesting superhero film with Zebraman and I don’t think he improves much with the sequel. Certainly, Zebraaman 2 comes with the benefit of a larger budget and better effects overall. It looks more like an actual superhero film, particularly during the climactic fights and showdown with the alien.

On the other hand, Attack on Zebra City does come with a major drawback that is a killer for a superhero film – and that is that the plot requires Zebraman to be affected with amnesia for more than half the film. A superhero film that sidelines its central character is surely like an action film that hospitalises its hero or a romance film that keeps its characters apart for most of the show.

One of Takashi Miike’s biggest weaknesses is that he is not a dramatist – his films are rarely ever ones that you cite for the ingenuity and twistiness of their plots. He gets by here by appealing to larger-than-life archetypes – superheroes and super-villains – and literally dividing forces into good/evil and black and white. One intriguing idea is that of Zebra Time – where all crime is legal for five minutes – which may well have inspired The Purge (2013), which came out three years later where it is quite possible that director/writer James Monaco drew his inspiration from Attack on Zebra City.

The film perks up and becomes its most typically Takashi Miike-esque – that is to say eccentric – at the climax. We get a standard dust up between Zebraman and Queen Zebra, replete even with the head of Sho Aikawa emerging out of the queen’s body on a stalk to berate him for being a loser. Not to mention a sign that randomly pops up on the screen (in English) during the middle of the battle to tell us to ‘Stop AIDS’. The climax of the film is Zebraman taking on the giant-size alien and defeating it by exactly the same means his tv counterpart did – eating it – resulting in him swollen to the size of a giant balloon floating through the air and finally drifting off into space and out through the Solar System.

Takashi Miike’s other genre films are:– Full Metal Yakuza (1997), a yakuza/cyborg film; the teen film Andromedia (1998) about a schoolgirl resurrected as a computer program; The Bird People in China (1998) about the discovery of a lost culture; Audition (1999); the Yakuza film Dead or Alive (1999), which comes with a gonzo sf ending; the surreal Dead or Alive 2 – Birds (2000); the six-hour tv mini-series MPD Psycho (2000) about a split-personalitied cop tracking body-hopping terrorists; the surreal black comedy The Happiness of the Katakuris (2001); Ichi the Killer (2001), a Yakuza film with some extreme torture scenes; the controversial taboo-defying Visitor Q (2001) about a mysterious visitor; the Cyberpunk future-set Dead or Alive: Final (2002); the surreal Yakuza film Gozu (2003); One Missed Call (2003) about ghostly cellphone calls; the ultra-violent Izo (2004) about a cursed, immortal samurai; an episode of the horror anthology Three … Extremes (2004); the fairytale Demon Pond (2005); the supernatural fantasy epic The Great Yokai War (2005); Big Bang Love, Juvenile A (2006), a prison murder mystery with SF elements; the SF film God’s Puzzle (2008); YatterMan (2009), a gonzo live-action remake of a superpowered anime tv series; the videogame adaptation Ace Attorney (2012); Lesson of the Evil (2012) about a murderous high school teacher; As the Gods Will (2014) with high school students being slaughtered by a doll; Over Your Dead Body (2014) wherein the roles in a ghost story play come to replay themselves in the lives of the actors; the gonzo horror film Yakuza Apocalypse (2015); Terra Formars (2016) about giant mutated cockroaches on Mars; Blade of the Immortal (2017) about an immortal samurai; JoJo’s Bizarre Adventure: Diamond is Unbreakable – Chapter 1 (2017); and Laplace’s Witch (2018).