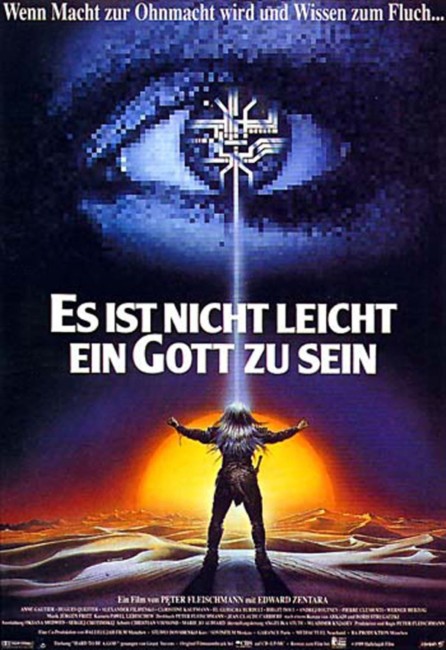 Disguised as the locals, Earth historians secretly observe the people of the planet Arkanar, which has never culturally evolved beyond the equivalent of the Middle Ages. Posing as the noble Rumata of Estoria, Anton goes to the king seeking Mita, one of the missing Earth historians who has defied the observers’ avowed policy of non-involvement. Anton finds Mita, only for him to be killed by the officious Prime Minister Reba. Anton is then ordered by his superiors observing from a satellite in orbit to take over Mita’s position. He becomes involved in the court intrigue and disturbed at the growing power of Reba who begins a brutal crackdown, arresting and executing intellectuals and dissidents. Among these, Anton is disturbed to find that the discoverer of a telescope and the builder of this world’s first printing press have been targeted. As Reba’s brutalities increase, Anton is no longer able to remain uninvolved.

The Strugatski Brothers, Boris and Arkady, were the most renowned science-fiction writers of the Soviet Union. Their writing career began in 1958 and lasted up until Arkady’s death in 1991. During this time, they turned out many classic works that include Hard to Be a God (1964), Snail on the Slope (1966), The Second Martian Invasion (1967), Tale of the Troika (1968), The Dead Mountaineers’ Hotel (1970) and Roadside Picnic (1972), among others. These have been sporadically translated into English and received acclaim. Many of their works, including Hard to Be a God, are set in the Noon Universe, a future where humanity has spread out across the galaxy and lives in benevolent harmony along the lines of Communist principles. (See below for the various film adaptations of their works).

Hard to Be a God is one of their earliest novels and concerns itself with the themes that run throughout their books of how an elevated moral society confronts and helps uplift societies that remain caught in a barbarous past. This was the first of two film versions of the book – it was later remade as Hard to Be a God (2013) by Alexei German – and there have even been a stage play and a computer game based on the book. Indeed, I was searching for a copy of the 2013 film to review and started watching this version, not aware it was a translated version of the 1989 film until some way in.

This version was the result of some discord between the Strugatskis and West German director Peter Fleischmann. They apparently had difficulty working with Fleischmann and disowned the film after the changes he made. This led to the later 2013 version where Boris determined to do the story properly, although that in itself was a problem-laden production where the completion of the film dragged out for thirteen years.

Hard to Be a God is a highly ambitious work for the period. We are cast into is a harshly unsentimental world that is very different-looking mediaeval society than anything we are used to on screen. If this were an English-language production, it would almost certainly have borrowed from a Hollywood costume warehouse and we would have had all the cliche mediaeval pageantry, cardboard sets and standard camera set-ups that we get whenever films want to represent this period.

Instead, Peter Fleischmann gives us a mediaeval world that is at once familiar seeming yet very different – less Knights of the Round Table (1954) and more akin to the dirty, bustling world of something like Terry Gilliam’s Jabberwocky (1977). The sets and streets we have look uniquely different and lived in. Yet this is also something that the film screws with – fifteen minutes and this is abruptly and anachronistically invaded as a modern helicopter flies over. (That said, the film keeps its displays of science-fictional trappings to a minimum – a few helicopters and the odd shot cutting back to the orbiting satellite. It is not a hardware driven science-fiction film and mostly moves along by the scope of its story).

In essence, Hard to Be a God is a Prime Directive story from Star Trek (1966-9). It would not take too much to rewrite this as a story with characters like Anton/Rumatra recast as a team of Federation anthropologists. Indeed, there are a number of similarities between the story here and the early sections of Star Trek: Insurrection (1998). You cannot help but think after watching a certain number of Star Trek episodes on a similar subject that what we have here is very familiar material. Indeed, a Star Trek episode would probably have trimmed down some of the court politicking and swept one more up into the ethical debate about interfering in a planet’s culture and whether it is right to just sit by and do nothing when a despot begins exterminating what you from your perspective know are going to be the intellectuals and innovators who will change the world.

There is also an undeniable contrast to Polish director Andrzej Zulawski’s On the Silver Globe (1988), another conceptually ambitious work from the Soviet Bloc around the same time and concerned with the way that colonists change the culture of the world they land on – the two films would make for a fascinating double-bill.

The Strugatsky Brothers’ books have produced a number of film adaptations, the most famous being Andrei Tarkovsky’s loose adaptation of Roadside Picnic in Stalker (1979), along with other works such as The Dead Mountaineers’ Hotel (1979), The Sorcerers (1982), Days of Eclipse (1989), The Temptation of B. (1991), and the two-part Inhabited Island (2008) and its sequel Inhabited Island: Rebellion (2009), as well their having written the screenplay for the nuclear holocaust film Letters from a Dead Man (1986).