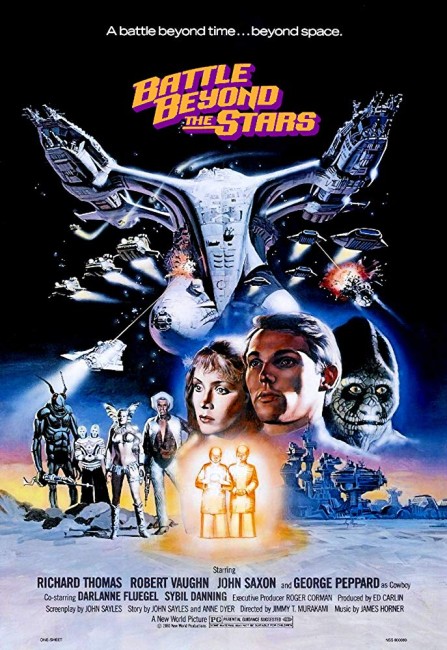 The galactic despot Sador demands that the people of the planet Akir surrender to him or be destroyed by his Stellar Converter. The people of Akir are peaceful and have no weapons or means of defending themselves. And so the innocent young farmer Shad sets out in an ancient spaceship to find help in defending against Sador. In his search, Shad gathers together a ragtag group of mercenaries, which include a clone gestalt identity, a Valkyrie warrior woman, a wanted killer, a reptilian alien seeking revenge against Sador for the slaughter of its people, and an intergalactic cowboy, all of whom agree to fight for their own reasons.

Director/producer Roger Corman was once nicknamed ‘The King of B Movies’. In all that he does, Corman has an entrepreneurial ability to quickly jump in on a box-office trend and milk it with a series of often cheesy but not unengaging B movies. Corman’s interests as both producer and director have passed through trend-jumping the B monster and sf cycles in the 1950s, the Hammer Gothic horror cycle in the 1960s with his own Edgar Allan Poe films, biker movies and Bonnie and Clyde (1967) ripoffs in the late 60s/early 70s, Jaws (1975) cash-ins in the late 1970s, B-budget martial arts and action, Alien (1979) and Gremlins (1984) ripoffs in the 1980s and 90s, to turn full circle with the 1950s B-movie remake fad of the late 1980s by regurgitating the scripts for his B films of the 1950s.

Battle Beyond the Stars was Roger Corman’s contribution to Star Wars (1977) mania. In the aftermath of Star Wars, film producers were caught by surprise, nobody much understood science-fiction and so simply jumped in with a host of copycat properties, many of which quickly looked to other cinematic genres like the Western and the war film for their lead.

Battle Beyond the Stars never emerges as much more than a flimsy trip through the post-Star Wars cliches but seems to be having a good deal of fun doing so. The film sets up an obligatory Star Wars-styled interstellar dogfight climax with tiny ships doing strafing runs and shooting each other with laser beams. There is also a blatantly copycat John Williams symphonic score.

Corman has clearly thrown a reasonable budget at the film and produces some extremely colourful and often quite imaginative sets and model effects (most of which were cannibalised in other New World productions – even reused as the basis for another entire film with Space Raiders (1983) – for years afterwards). There is a certain amusement to some of the improbable model designs for the ships – one is shaped like a hammerhead shark, one like a WWI biplane, one like a mini UFO from Close Encounters of the Third Kind (1977), another a giant scrotal sac. However, instead of being the dramatic highlight of the film, these scenes slow proceedings right down. The effects are quite competent for the era but the problem is that we end up with a half-hour of ships zipping about shooting one another where it often difficult to tell one ship from the next.

Amid the cast, Richard Thomas, in about the only theatrical starring role he ever had beyond tv’s The Waltons (1971-81), wrings his hands with shy earnestness. George Peppard seems to be having a good deal of fun getting into his role as a spacegoing comboy. German actress Sybil Danning, whose only two possible reasons for her cult status are amply revealed by her costume, gives probably the best in a career of bad performances as the Valkyrie warrior seeking a glorious death. (When the film was screened on US tv, whenever Danning appeared on screen the image had to be blown up into closeups to hide her too revealing costume). Robert Vaughn gives the best performance in the film as a worldweary wanted killer who joins the party – “Did you do bad when you were little?” two kids ask him. “I was never that little.” “How do you feel?” “I don’t feel.”

Director Jimmy T. Murakami subsequently moved into animation. He went on to make the well-worthwhile nuclear holocaust animated film When the Wind Blows (1986) and the animated A Christmas Carol: The Movie (2001).