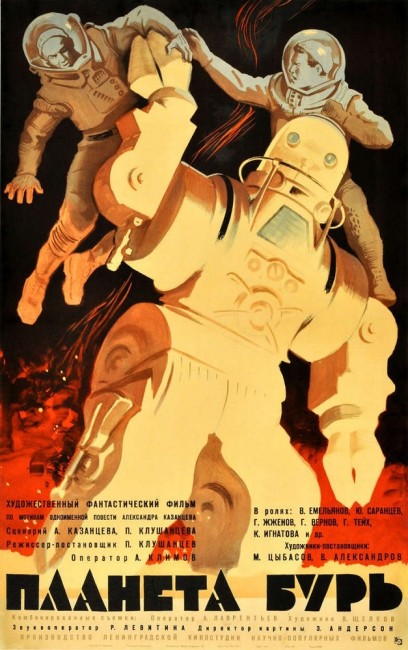 Three spaceships, Sirius, Vega and Capella, are sent on a mission to explore Venus. The Capella is destroyed by meteorites. The other two crews decide to press on. The two man crew of the Vega makes the decision to land on the planet but contact is lost after they touch down in a swamp. The three men in the Sirius then decide to land and mount a rescue. On the planet’s surface, they find a tempestuous world filled with dinosaurs, wild plantlife and creatures.

American cinema of the Cold War period produced a great output of science-fiction films dealing with alien invasion and atomic monsters. By contrast, genre output from the other side of the Iron Curtain was far more modest. The Soviets produced a body of science-fiction films during the same period but most of these lack the paranoid tone of American efforts and are usually about carrying the Communist ideal to the stars. These include efforts such as First Spaceship on Venus (1959), The Heavens Call (1959), Ikarie Xb-1/Voyage to the End of the Universe (1963), Andromeda Nebula (1967), Solaris (1972), Moscow-Cassiopeia (1973), Test Pilot Perx (1979), Per Aspera Ad Astra (1981) and Moon Rainbow (1983), among others. (For greater detail see Soviet Cinema).

Storm Planet’s greatest footnote in retrospect is that it was brought up by Roger Corman and rehashed in several films. Corman had taken the earlier The Heavens Call and had Francis Ford Coppola re-edit it as Battle Beyond the Sun (1963). Similarly here, Corman reissued Storm Planet no less than three times. Firstly, it went out as Voyage to the Prehistoric Planet (1965) with the addition of several minutes of additional scenes shot by Curtis Harrington starring Basil Rathbone and Faith Domergue. Effects scenes were reissued in Harrington’s largely original space vampire film Queen of Blood (1966), while Peter Bogdanovich then made Voyage to the Planet of Prehistoric Women (1968), combining scenes from both Storm Planet and The Heavens Call and some original scenes starring Mamie Van Doren. It was not until the dvd release in 2009 that it was possible to view an uncut version of the original Soviet version of Storm Planet (seen here).

Storm Planet is a solid example of the Soviet science-fiction film. The opening credits proudly announce: “Trust fairly in the ability of the Soviet public to explore the planet with self-sufficient spirit.” All of the cast are the stodgy colourless types preferred by these films and have little individual distinction beyond job descriptions as engineers and astronauts. There is a woman along for the mission (Kyunna Ignatova), although she is left in the orbiting capsule for the duration – there is one modestly effective scene where she casts off her magnetic shoes and conducts zero gravity acrobatics in the cabin.

The scenes on the surface of Venus are all as they were in the US version. Naturally, these are the most colourful and interesting in the film. We see the cosmonauts attacked by giant Venus flytrap plants; dinosaurs roaming the surface; and a colourful journey underwater to explore the realm there (the US version added a woman swimming underwater). There are some not bad effects with a flying exploratory vehicle and some rather terrible ones shooting down a rubbery-looking pterodactyl on wires.

There is a bizarre moment towards the end where lead astronaut Vladimir Yemelyanov sits among the other men and opines about aliens visiting Earth in the past and influencing the building of the great monuments, which becomes a prefigual of the Ancient Astronauts theories of Erich von Daniken, although Von Daniken would not publish these until a few years after this with Chariots of the Gods (1968).

The best scenes are the ones with the robot and the erupting volcano. The robot is a bulky machine that looks as though it could actually walk. In one of the film’s more dramatic moments, it has to cross a river of lava carrying the two men on its back before deciding its programming dictates that it should dump them in mid-river, forcing them to have to reprogram it by prying off its back panel and rewiring the electronics, all while clinging to it in the middle of the lava stream.

[PLOT SPOILERS] The other lovely moment is the ending where the explorers depart Venus, assuming it to be too hostile to human life. Just before they depart, they find a stone that is broken open to reveal the beatific image of a humanoid revealing that there was life on the planet. In an image that would not have been amiss in the works of Ray Bradbury, the camera focuses on a pool of water and we see an alien reflected there, looking up at the departing rocket.