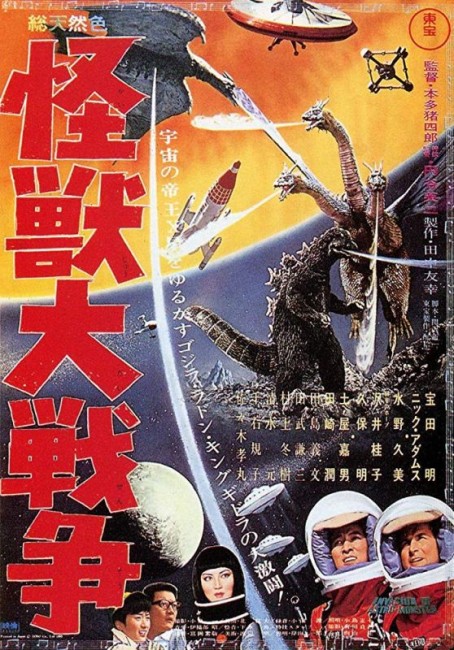 The rocketship P1 is launched to investigate the planet X in the Scorpio Constellation just behind Jupiter. Landing, the astronauts encounter the people of X. The Xians show them how the three-headed monster Ghidrah is ravaging the planet’s surface. The Xians make a proposal – if they can borrow Godzilla and Rodan to deal with Ghidrah, they will give humanity a cure for all diseases. Humanity agrees to the proposal and so Godzilla and Rodan are taken up by Xian ships. However, when the astronauts return to Earth with what they believe to be the formula, they instead discover it is a tape that contains a demand from the Xians that Earth surrender and become an Xian colony; if not all of the monsters will be let loose against the world.

Monster Zero was Toho’s sixth Godzilla film. It was their fifth monster bash and their third film to feature team-ups between monsters from their other movies. In this case, Godzilla fought alongside Ghidrah, the three-headed monster that had been introduced in the previous Godzilla film Ghidrah the Three-Headed Monster (1964) and Rodan the hypersonic flying reptile from Toho’s standalone monster movie Rodan the Flying Monster (1956), who had also turned up in Ghidrah. Although such had been touched upon in Ghidrah, Monster Zero was the Japanese monster movie that patented the theme of the various monsters being controlled and/or turned against the Earth by invading aliens that was used through numerous of the Godzilla films of the 1960s and 70s, as well as copied in Daiei’s Gamera series.

What surprises about Monster Zero is that it appears to have been conceived as a monster movie second. Primarily, it seems to have been made as a space opera-come-alien invasion film along the lines of director Ishiro Honda’s The Mysterians (1957). The success of The Mysterians had inaugurated a genre of Japanese space opera and produced copies like Prince of Space (1959), Battle in Outer Space (1961), Invasion of the Neptune Men (1961) and those that were peculiar blends that lay somewhere between space opera and monster movies with Gorath (1962) The Green Slime (1968) and Ishiro Honda’s own Yog – Monster from Outer Space (1970). The monster scenes play a relatively minor part here and do not occur in a major way up until the very end. The same occurred with the subsequent Godzilla film Destroy All Monsters (1968).

In all the requisite regards, Monster Zero is a typical Japanese monster movie of the era. Ishiro Honda directs in his usual stolid way. Everything is bright and colourful. There is a reasonable, if didactic, score. The plotting is rudimentary – one can see all the surprises – that the Xians are up to no good, that Miss Namikawa is an Xian – miles in advance. The science is bizarre to say the least – the planet X is in the constellation of Scorpio, although the constellation of Scorpio appears to be located right behind the planet Jupiter.

Nick Adams was imported as an American name to boost international sales but gives an ingenuous and nasally grating performance that annoys considerably in its chirpy cockcertainty. (Adams committed suicide in 1968, which resulted in Monster Zero‘s English-language release being held up until 1970).

The colourful absurdity makes for a surprisingly entertaining film. Despite some questionably acceptable model rocket effects, the special effects are among the better of the Godzilla series (at least up until the 1980-90s revivals). The mass destruction climax is rousingly well done. The three-headed Ghidrah looks convincing and the monster fight scenes are not too obviously silly as they increasingly became in the 1970s entries. The film has its share of lunatic moments – like that of Godzilla jumping for joy at having trounced Ghidrah – although the last fight scene where Godzilla and Rodan turn on Ghidrah with Godzilla kicking rocks and champing at the bit like a riled boxer is just a little silly.