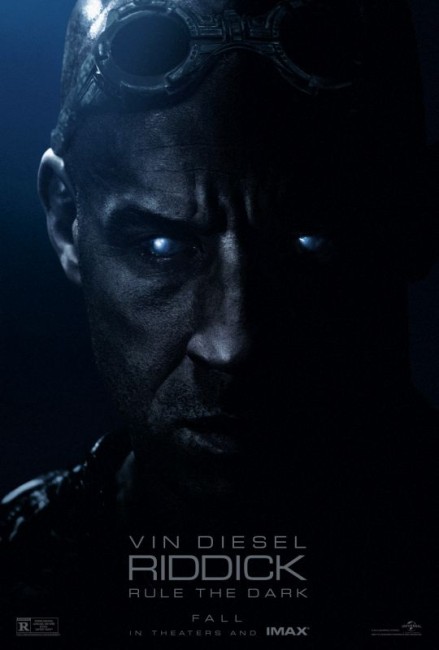 Riddick is forced to survive on a tough desert world where he is pursued by predators at every turn. Having been made the Lord Marshal of the Necromongers, he demanded the location of his homeworld Furya from Vaako, only for Vaako to set a trap that left him abandoned him on this planet. He makes it to an emergency shelter and activates the distress beacon. This immediately brings a group of bounty hunters led by Santana to the planet to claim him, followed by another much more outfitted party led by Johns. They are greeted by a message from Riddick telling them to leave one ship for him and depart on the other or be killed. Ignoring this, they begin hunting him, only for Riddick to start progressively eliminating their numbers with his superior hunting skills. They lock up crucial nodes to prevent him taking the ships, only for Riddick to steal the nodes. They capture Riddick but as a vast storm comes towards the shelter, bringing every predator with it, he tells them that the only means of survival is for them to cooperate with him.

I have maintained for some time that David Twohy is one of the great hopes of mainstream US genre cinema. Twohy had a strong career as a screenwriter with genre films like Warlock (1989), Waterworld (1995) and Impostor (2002), before making his directorial debut with the well worthwhile time-travel effort Timescape/The Grand Tour/Disaster in Time (1992). This was followed by the alien takeover film The Arrival (1996), the subtle haunted submarine drama Below (2002) and the thriller A Perfect Getaway (2009).

By far and away, Twohy’s best and most critically acclaimed film has been Pitch Black (2000), a superbly tense planetary survival story about a shipwreck crew forced to trust the tough and lethal serial killer Riddick played by a then unknown Vin Diesel. The film was a modest success and gave a big career boost to Vin Diesel who went onto The Fast and the Furious (2001) and other films.

David Twohy and Vin Diesel paired up again for The Chronicles of Riddick (2004), a not uninteresting film that left behind the terse planetary survival story of the original to become a dark fantasy space opera, although this was disliked by many. After having talked for some years about a third Riddick film, which was repeatedly announced as taking Riddick to the Underverse and exploring more of the mythology opened up in The Chronicles of Riddick, Twohy and Diesel have teamed back up again here.

It is immediately apparent that Twohy has sought to cut back on the directions that The Chronicles of Riddick took, has abandoned the idea of venturing to the Underverse and has returned to the basics of Pitch Black and its story of planetary survival. The first twenty minutes of the film give Vin Diesel sole centre stage as we see him forced to survive alone on a planet against deadly predators. Twohy focuses on his fights with improvised weaponry, the struggle to find food and shelter.

Alas, much of this also takes place with a series of often ridiculous action poses. The scene in the first few minutes where Vin Diesel is forced to twist his broken leg into place is such a cliche that it causes members of the audience to start laughing, while the addition of an alien creature that acts as dog companion to Riddick seems to defy you to regard it as absurd. It is during these scenes that I was happy to write Riddick off as collapsing under the weight of its own posturing self-importance as The Chronicles of Riddick was accused of being.

On the other hand, Riddick takes a marked improvement as soon as it introduces other characters to the mix. Here Twohy starts to return even closer to the essentials of Pitch Black – the idea of the party of diverse people stranded on a desert planet hunted by vicious predators and the initial deadly games where they are hunting Riddick and he outsmarting their every move, before the extended climactic scenes where they are forced to enter into an uneasy truce with him and rely upon his abilities for the sake of mutual survival. The film even conducts a lesser repeat of the scenes where the group must undertake a night journey through open territory surrounded by the predators.

Despite the sense that Twohy is trying (perhaps a little too much at times) to return to the tried and familiar that worked the first time, Riddick works well in these parts. There is a good deal of fun to the scenes of the various mercenaries bringing their hi-tech armaments and devices against Riddick and the means by which he coolly evades them while eliminating their numbers. There is a particularly amusing scene where the men debate the pros and cons of opening the lock and whether or not Riddick has outsmarted them.

On the other hand, some of this does slide over into much more of an action movie comic-book than Pitch Black ever was – the scene where Vin Diesel despatches an opponent by using his freed foot to throw a machete across the room, impale the man to the wall with it, causing the sliced top off his head to fall off and right into the box that Diesel has also kicked across the room just in time causes an audience to collapse into laughter more than it wows them with its lethal cool of such a move.

There has been an increasing slide in the characterisation of Riddick between Pitch Black and here. There he was a figure of lethal danger, described as a ‘serial killer’, although by the end of the film had gained a certain nobility. When it came to The Chronicles of Riddick, he was more of a standard criminal anti-hero where the serial killer description had dropped off and been forgotten. Here Riddick is the hero of the show and his serial killer capabilities never extend much beyond say the ones of Clint Eastwood’s Man With No Name – someone who is willing to kill when threatened but is always driven by a code of personal morality – at one point here he even has a speech where he says he would have had personal issues with killing a child.

In Diesel taking on a producer credit with both the Riddick sequels, it feels very much that it has been his influence that has turned Riddick from dangerous criminal to just another lone wolf anti-hero tailored to Diesel’s tough guy persona, thus making the character much less interesting than it was back when Riddick was a dangerous unknown. This also means that the film is more reliant on Diesel in front place and of the three cinematic Riddick outings, this is the one where his flatness as an actor starts to show through the character’s polished lethality. You suspect what has come in is another case of actor’s egotism – of the star always wanting to be the one seen as the good guy.

Case in point being the character of Dahl, played by Katee Sackhoff, an actress one has always had an admiration of since playing Starbuck in tv’s Battlestar Galactica (2003-9). David Twohy has clearly modelled her on Jenette Goldstein’s Vasquez in Aliens (1986), the tough women in the all-male crew. Vasquez became a gay/feminist icon and Twohy has clearly conceived Dahl in the same vein where, unlike Goldstein whose sexuality was never clarified, she even has a line about how she doesn’t fuck men. On the other hand, this is gratingly undercut by Vin Diesel’s macho presence and the need to suggest an attraction towards him with she even going out smiling deliriously as she helps hoist him up to the ship. It is as though Diesel’s ego cannot conceive that the woman present might not even be attracted to him and so has to bend her character out of shape to show her succumbing to his charm.