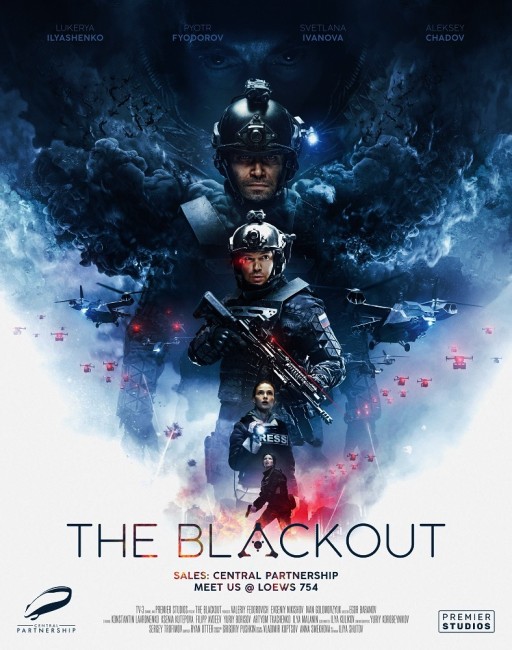 aka The Blackout: Invasion Earth
(Avanpost)

Without any warning, power goes off all around the world. The only area unaffected is an area of several hundred miles in Western Russia that includes Moscow. Communications with the world beyond that has been lost. Military troops are mobilised to venture beyond what is called the Circle of Life and see what has happened. There the soldiers find empty and devastated cities. A mysterious alien figure Id appears to one of the soldiers. Id explains that this is part of an alien invasion force. 200,000 years ago, humanity was created as a weapon to wipe out the original inhabitants of the Earth and the aliens have now returned to claim the planet. Id has rebelled against his people and wants to lead the soldiers against Ra, the leader of the invasion forces.

US science-fiction films of the 1950s were consumed with fears of alien invasion where the aliens were often thinly disguised versions of the threat presented by Communism and the Soviet Union. (For an overview of the genre see Alien Invasion Films). The Russians made their own output of SF films around this same time, although were not as prolific as the Americans (see Soviet Cinema). The surprise about these is that unlike their American counterparts none of the Soviet films ever dealt with the topic of alien invasion. Indeed, The Blackout is, as far as I am aware, the first ever Russian film on the topic of alien invasion.

The Blackout comes with an intriguing set-up where one small area of Russia remains untouched as something affects the rest of the world outside of the zone. The premise of a worldwide power cut was also depicted in the tv series Revolution (2012-4). There was also the unrelated earlier US film The Blackout (2009) about people in apartment facing monsters that appear during a power cut. There are similarities to the Russian masterwork Stalker (1979), which had a small industrial zone affected in the aftermath of an alien visitation and a group of people venturing inside the alien terrain, although here the situation is reversed and it is people inside the zone venturing into an alien terrain the occupies the whole world outside.

We are told that all but 0.5 percent of the population has disappeared, although get to see nothing of how the blackout affects the rest of the world. And for a world where a small area of western Russian is all that remains, life seems to go on seemingly as normal – you cannot help but think the population should be spending their time trying to cooperate and deal with the enormous problem they would face rather than rioting as we see them doing. Nevertheless, the effectiveness of the film lies in the confrontation between human and alien.

Egor Baranov directs with an impressive scale of action from the opening scenes as a military unit mobilises against a threat. For much of the film, it is not exactly clear what the alien threat is. Baranov gives the scenes with the military moving through the empty city a bustling urgency. The camp is attacked by giant mutant bears early in the show but it is never explained what these are. That is all we get until the appearance of the aliens later in the film. The aliens come with strangely fluted noses and no mouths. (If they are the basis for humanity as is stated, it leads you to wonder how they manage to eat – any alien species that consumed food and water via its nose would have major problems with choking, the human body at least has a nose that allows it to inhale air at the same time as eating).

Certainly, with the introduction of the aliens, The Blackout becomes an altogether different film. There’s the fascinatingly out there idea the alien raises that humanity was introduced to Earth to eliminate the previous inhabitants of the planet and humanity’s warlike tendencies are pointed to as proof of this. The latter sections of the film are the most impressive with the soldiers venturing through the city as the Ra alien creates a massed assault by hordes of mind-controlled humans who run into the path of the APC and even throw themselves onto it from above, detonating explosives.

A sequel has been promised.