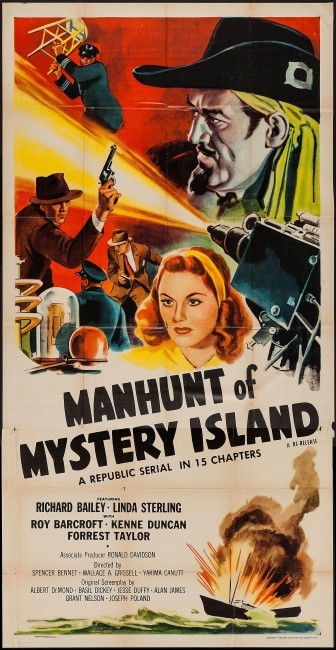 aka Captain Mephisto and the Transformation Machine

The police ask the help of criminologist Lance Reardon in finding Professor William Forrest who has gone missing while on an international search for radium supplies to power his proposed radiotomic transmitter, a device that is capable of remotely broadcasting energy. The trail leads Lance and Forrest’s daughter Claire to the former penal colony of Mystery Island where the professor has been made a prisoner of the evil Captain Mephisto. Mephisto is a disguise used by one of Mystery Island’s four owners who uses a blood corpuscle transformation machine to transform into the island’s long dead pirate governor. As Lance and Claire arrive on Mystery Island, Captain Mephisto employs a variety of tricks to dispose of them.

The serial was at its height during the 1930s and 40s, eventually dying away in the 1950s with the arrival of television. Serials were adventures intended for juvenile audiences that were shown in theatres in either twelve or fifteen weekly chapters of about 15-20 minutes each. Each chapter ended with the heroine tied to a railway line before an oncoming train, the hero hanging onto the edge of a cliff by his fingertips (which gave rise to the term ‘cliffhanger’) or some such, and the means whereby they escaped told at the start of the ensuing chapter the following week. Though the principal focus was adventure, serials varied through a number of genres, including the Western, the G-Man film, the first ever screen superhero outings and, of course, the space opera, which included classics like Flash Gordon (1936) and sequels and Buck Rogers (1939).

The fifteen-chapter Manhunt of Mystery Island is an unexpected delight. All the talk of radiotomic transmitters, radium vapour beams, teletubes and the ever delightful ‘molecular rearrangement of blood corpuscles’ is top B-movie pseudo-scientific jargon. As serials go, the action scenes are great. The fights are something that all modern tv shows could take lessons from – every time heroes and villains meet it is not with words but with fisticuffs. And not commonplace fisticuffs – these are fights that wreck entire rooms. In fact, the plot never actually advances – every time a clue is found, the villains fortuitously destroy it in the nick of time and it is on to the next fight sequence.

The cliffhangers are a wonderful array of nail-biting fights on clifftops, flooded tunnels, cut rope-bridges or the hero trapped beneath falling winepresses. Part of the reason for the excellence of the action element could well be that Manhunt of Mystery Island is co-directed by Yakima Canutt, the top Hollywood stuntman of the era.

Manhunt of Mystery Island also manages to make the typically impoverished cheapness of serial budgets work for it in a way that is quite surreal – no pretence is made to disguise the Hollywood locations as a tropical island, for instance. The establishing shots of the mansion and particularly the scenes of Mephisto’s transformation are the same shots used over and over.

Particularly entertaining is the costumery – as Captain Mephisto, Roy Barcroft’s pirate disguise consists of a slouch hat, a bandana and a line of lipstick on his cheek that one takes is supposed to be a scar. (It is never explained throughout whether Captain Mephisto is the actual pirate ancestor revived or whether this is the modern day descendant who has simply adopted this as a disguise). Elsewhere, Mephisto’s sidekick Kenne Duncan spends the entire film in a costume shop sailor suit.

The inflectionless and entirely expressionless delivery of hero Richard Bailey is hilarious to watch. Especially so in that Bailey is given much of the film’s expository dialogue – he has the appearance of someone who walks on from time to time and comes to life to deliver plot points, not unlike some kind of automaton. Far better is heroine Linda Stirling, the acknowledged serial queen of the day. She is on the receiving end of all the “you stay here” dialogue, as was typical of the women of the era. More often than not though she becomes the saviour of the hour, rescuing the hero more than once and proving a dab shot with a pistol.