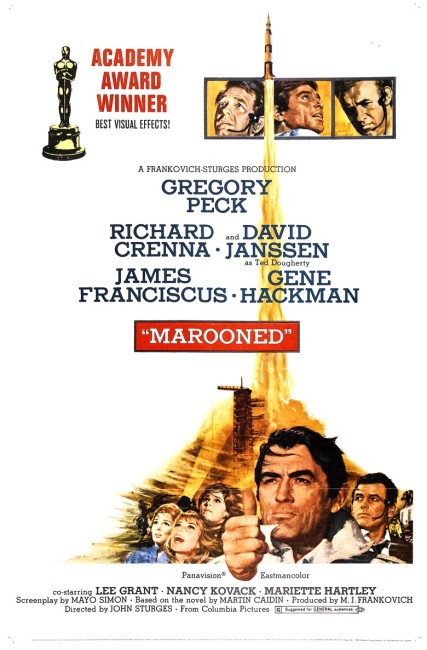 The manned space capsule Ironman One is about to return from a five month mission when its retro-rockets fail, leaving the capsule and its crew trapped in orbit. The three astronauts panic as they face a diminishing air supply. On the ground, NASA director Charles Keith makes all effort to mount a rescue mission.

Marooned is an interesting drama. It came out only three months after the Moon Landing and is clearly tied to the topical public fascination with the event. It is a science-fiction film that sets itself very much within the realms of science prediction – it is science-fiction not in terms of imaginary science or technology but only by virtue of depicting a situation that had not yet happened. In this respect, it was uncannily predictive of the similar disaster and drama surrounding the ill-fated Apollo 13 mission a year later – see Apollo 13 (1995).

Marooned was directed by John Sturges, a former specialist in Westerns, having made classics such as Bad Day at Black Rock (1956), Gunfight at the OK Corral (1957) and The Magnificent Seven (1960). In the 1960s with the growing decline of the Western, Sturges had started to move away from Westerns toward what would today be called the techno-thriller, with the likes of the biowarfare thriller The Satan Bug (1965) and the big-budget Ice Station Zebra (1968), before culminating in this.

The film bristles with a determined realism – the launch sequences are highly convincing, you are never sure if what you are seeing is real or special effects. John Sturges builds suspense well and the film moves with a reasonable dramatic urgency, being particularly gripping when it comes to the mounting hopes and possibilities during the launch in the middle of the hurricane. Unfortunately, dialogue often seems like densely technical recitations from a textbook, against which the human elements seem almost an afterthought.

The film is certainly well cast and everyone fills their one-dimensional roles well, with the exception of Gregory Peck who spends the entire film with no facial change other than a vaguely troubled frown. The special effects work is decent, particularly the scenes of the capsules and astronauts in orbit, although the appearance of the rescue capsule at the end does show exactly what a difference that motion control cameras have made to filmmaking since. Like Robert Altman’s Countdown (1967) the year before, this ends on the somewhat Utopian wish fulfilment of the Space Race being able to be resolved on a note of East-West cooperation.

The film was based on a 1964 novel by Martin Caidin. Caidin was a pilot who ran an aerospace consultancy firm and wrote a number of fiction and non-fiction books. The work he was most famous for was the novel Cyborg (1972), which became the basis of the tv series The Six Million Dollar Man (1973-8).