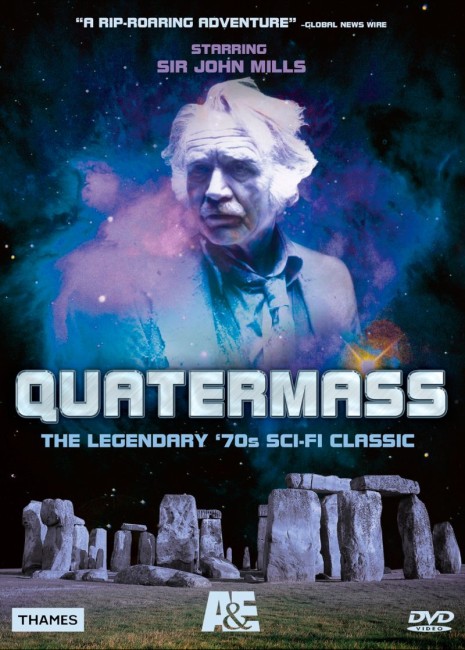 aka The Quatermass Conclusion

The aging Professor Quatermass travels to a future London where society is decaying at the edges so that he can take part in a tv commentary for an historical Russian-American space linkup. As they watch, the ships are destroyed by an alien force. Quatermass becomes fascinated by the Planet People, a counter-culture movement where youth en masse follow lei-lines across the country to ancient megalithic sites. However, their arrival at the sites trigger buried devices left by aliens that feed on human lifeforce and cremate the teens in the thousands.

In these, Nigel Kneale created stories that balanced staple elements of the genre – mutated astronauts, alien body snatchers – with strong plot, good writing and fine characterisation. By the time of Quatermass/The Quatermass Conclusion, it had been over a decade before we had last seen the Professor and two decades before he had appeared in an original story. With this production, originally made as a four-hour tv mini-series but cut down for release as a 102-minute feature film, Nigel Kneale brought the good professor back to round his tetraology off.

The way that Nigel Kneale chooses to do so makes for a surprising end to the series. In the 1950s, Quatermass was a bold adventurer – at the end of The Quatermass Experiment/Xperiment, Quatermass’s rocket launch had ended in disaster yet he was undaunted and making plans to launch another; here he is almost 180 degrees removed from that same character, a frightened old man who instead of seeking new bold horizons to conquer, sits cynically decrying a space link-up for its symbolic wedlock of two corrupt political dynasties.

This Quatermass is even a different person in the casting of John Mills, a diminutive man who is almost the complete antithesis of brutish Brian Donlevy from the first two Quatermass films or the more authoritative Andrew Keir in Quatermass and the Pit. The exercise almost seems to represent a wearying of life on the part of Nigel Kneale – it seems a story written by someone who sees the world as having gone down the drain and doesn’t appear to care about it any longer. It also seems to have been written by someone who can no longer understand what the generation gap is about to the extent that they literally view adults and youth as different species.

Despite the prevailing mood of cynicism, Quatermass/The Quatermass Conclusion has the familiar conceptual wildness one has come to associate with Nigel Kneale. The melange of ideas and images is striking – the Planet People who follow lei-lines using plumb bobs, being drawn to ancient megalithic sites, which were erected as warning markers by the ancients over giant alien microwaves. Kneale even tosses in the amusingly wild idea that Wembley Stadium is one of these ancient sites and offers such as explanation for football hooliganism.

However, the Planet People as leftover hippies is an idea that seems well and truly dated by 1979. (The result of the script having been written in the early 1970s, originally for Hammer as an original film. Kneale also originally used Stonehenge as the megalithic circle but the series was refused permission to shoot on a national monument). Perhaps a better idea at the time would have been to have replaced them by punks.

The actual appearances of the alien force in mid-air and the crisped ash remains left on the sites have an eerie power. The images of a socially decayed London – of pay-cops, of books used for burning, of vehicles and bodies lying in the streets and cats being sold for their fur – are also well achieved.

This was not the end of the Quatermass saga. 25 years later, the BBC revived the character in a remake, the live-broadcast The Quatermass Experiment (2005) starring Jason Flemyng as Quatermass.

Nigel Kneale’s other tv works are:– 1984 (1954), a live adaptation of the George Orwell novel; The Creature (1955) about the search for The Yeti; The Road (1963) about a haunting that may be an example of time travel; The Year of the Sex Olympics (1970) about a future dulled into compliance by televised sexual competitions; Wine of India (1970) about future euthanasia; The Stone Tape (1972), a scientific explanation of hauntings; the six-episode tv anthology series Beasts (1976), which all featured unseen monsters; the seven-episode comedy series Kinvig (1981) about an SF fans who has an encounter with aliens; and the ghost story tv movie The Woman in Black (1989). Kneale’s film scripts were The Abominable Snowman (1957) adapted from The Creature; the adaptation of H.G. Wells’s The First Men in the Moon (1964); the occult film The Witches/The Devil’s Own (1966); and uncredited work on Halloween III: Season of the Witch (1982).

Director Piers Haggard is the great-grandson of the adventure writer H. Rider Haggard, author of books like King Solomon’s Mines (1885) and She (1887). Piers Haggard has made a number of genre entries such as the occult film Blood on Satan’s Claw (1971), the Dennis Potter mini-series Pennies from Heaven (1978), The Fiendish Plot of Dr Fu Manchu (1980), Venom (1982) and The Breakthrough/The Lifeforce Experiment (1994).

Clip from the series here