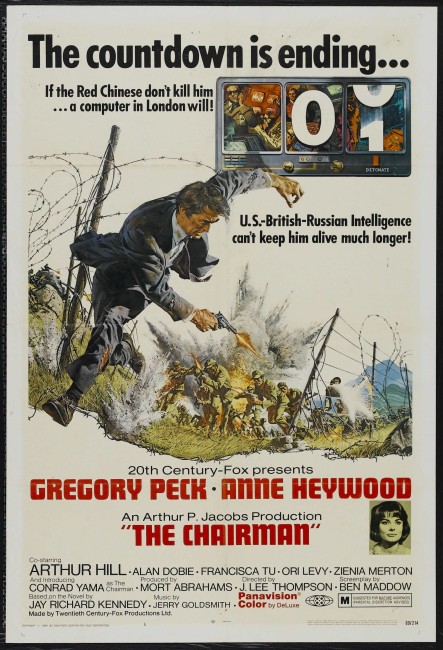 aka The Most Dangerous Man In the World

The US military show Nobel-prize winning biophysicist Dr John Hathaway evidence that the Chinese have perfected an enzyme that allows wheat to be grown in adverse extremes. They want Hathaway to go into China posing as a defector and obtain the formula. After Hathaway agrees, a radio transceiver is planted in his head to relay information – although, unknown to him, this is also a miniature bomb. Once inside China, the plans start to go wrong and Hathaway soon finds himself on the run from the Chinese.

This thriller is quite an oddity. It was one of numerous spy films that came out in the 1960s following the success of the James Bond films. The plot is geared towards being a more realistic spy film along the lines of John Le Carre. Although, there are times that the film also tries to emulate the campy unreality of the James Bond films – like the bedroom encounter with a girl named ‘Ting Ling’ (a typically Ian Fleming-esque double entendre) and a campy scene where Chairman Mao argues a defence of Chinese Communism over a game of ping pong.

For the most part, The Chairman/The Most Dangerous Man in the World is a serious film. It is at its best when conducting a portrait of Communist China. This comes with some striking vignettes of peasants in the field being lectured by party members with Little Red Books, even a series of dialogues that allow the Communist Chinese to argue their own case. There is an impressive lavishness of production values and location work in the backlot constructions of the People’s Republic.

However, director J. Lee Thompson, who made the great Cape Fear (1962) a few years earlier, lacks what it takes to enervate The Chairman as a thriller – the moment the film reaches the Chinese mainland, action drags to a standstill and the film becomes slow and talky. The lengthy scenes at the laboratory lack any drama at all, although J. Lee Thompson does get his act together enough to sustain a suspenseful action climax (which has the incongruous image of the Russians becoming the Seventh Cavalry). Hitchcock did much of the same plot better with Torn Curtain (1966) three years earlier.

J. Lee Thompson’s other films of genre interest are:– the classic revenge psycho-thriller Cape Fear (1962), the occult film Eye of the Devil (1967), Conquest of the Planet of the Apes (1972), Battle for the Planet of the Apes (1973), The Reincarnation of Peter Proud (1975), the Western The White Buffalo (1977) with Charles Bronson hunting a mythic buffalo, the slasher film Happy Birthday to Me (1981), 10 to Midnight (1983) with Charles Bronson vs a serial killer, and the dire adventure film King Solomon’s Mines (1985). J. Lee Thompson also co-wrote the scripts for the very strange psycho-thriller East of Piccadilly (1940).