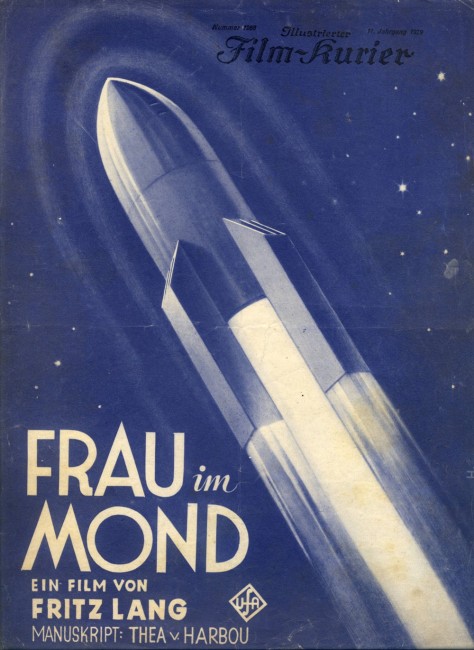 Die Frau im Mond (Woman in the Moon) was the first major screen attempt to broach the subject of space travel. There had been odd attempts before such as Georges Melies’s whimsies A Trip to the Moon (1902) and An Impossible Voyage (1904), the Danish film Heaven Ship/A Trip to Mars (1918) and the Soviet Aelita (1924). Die Frau im Mond was the first effort to concern itself with a serious and scientifically credible space launch.

Much emphasis in genre history is devoted to Destination Moon (1950) and its pioneering realism but a good deal of this was done before in Die Frau im Mond and a little later in the even less known Soviet film The Space Ship (1936). Die Frau im Mond was not a huge success in its time, partly in that it was made silent just when sound was arriving and as a result ended up being overlooked. Seen today (especially in the 2000 restoration from the Friedrich Wilhlem Murnau Foundation), it shines as the epic it deserves to be recognized as.

Die Frau im Mond was made by Fritz Lang, who had risen up through early adventure films and hit his stride with epics of German silent cinema such as Dr Mabuse, The Gambler (1922), Siegfried (1924) and Metropolis (1927) and was one of the truly great directors of this silent era. (See below for Fritz Lang’s other genre films).

Lang brought everything to bear on Frau im Mond. He even brought in scientific advisors such as mathematician Herman Oberth, who had written a book on spaceflight. With Ufa and Lang’s financial backing, Oberth announced an ambitious scheme to launch an actual rocket for the film’s premiere. Oberth assembled a team but their plans proved a failure because they had no experience with engineering or rocketry. Nevertheless, Oberth did advise Thea von Harbou on the script and she incorporated many details. he care and attention shows on screen. They get an amazing amount right, including the need for a rocket to achieve orbital escape velocities, the lower gravity on The Moon and the screen’s first depiction of zero gravity.

It is a surprisingly long film. Lang once commented that he made his films long so that they took up both halves of a double-bill. Most versions of Die Frau im Mond seen in English-language release are cut to 90 minutes and the full-length restoration print seen here runs to a sizable 200 minutes. Lang composes long scenes – some run over ten minutes apiece. It is 90 minutes (over the normal running length of the average film) before we get to the rocket itself – and these are taken up with drawn-out scenes of Helius going to visit the professor, his comic attempts to contact his rival Windegger during his engagement party and Turner’s Machiavellian schemes to get in on the deal.

Nevertheless, these scenes grip because Fritz Lang has an often deft sense of humour, particularly the running cuteness of the professor’s mouse or some of the scenes with the boy. Fritz Rasp also makes a wonderfully hissable villain, seeming like a physical embodiment of a rat with his tall obsequiousness and perhaps intentionally Hitler-like cowlick.

Fritz Lang’s other films of genre interest are:– Destiny (1921) wherein Death incarnates two lovers throughout various historical periods; Dr Mabuse, The Gambler (1922) concerning a ruthless criminal mastermind; the two-part Niebelungen saga, Siegfried (1924) and Kriemhild’s Revenge (1924), based on the Teutonic myths; Metropolis (1927); M (1931), a thriller concerning the hunt for a child killer; The Testament of Dr Mabuse (1933); the afterlife fantasy Liliom (1933); the film noir psycho-thriller Secret Beyond the Door (1948); and a further Dr Mabuse sequel The 1000 Eyes of Dr. Mabuse (1960). Lang also wrote the script for Plague of Florence (1919), an adaptation of Edgar Allan Poe’s The Masque of the Red Death (1842)