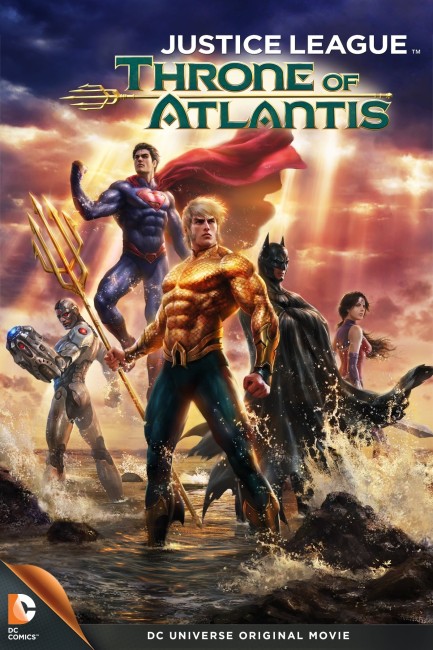 After the submarine USS California is attacked by mysterious forces in the depths of the Marianas Trench, Cyborg is sent to the ocean floor to investigate. After being attacked, Cyborg brings back together the team of superheroes that came together to battle Darkseid, although some of them require persuasion to do so. As they examine the threat they are dealing with, Wonder Woman realises that it is coming from Atlantis, a race of merpeople that lives hidden at the bottom of the Trench. In Maine, Arthur Curry is mourning the death of his father when he is abducted by soldiers from Atlantis. He learns that he is half-human, half merman and the son of Atlantis’s ruler Queen Atlanna. Her full-blooded son Orm wants to declare war against the surface but Atlanna believes that Arthur is capable of bridging peace between both worlds. Orm then fabricates an attack from the surface and murders his mother, claiming the throne. The Justice League travel down to Atlantis to investigate just as Orm takes Atlanna’s trident, which grants him great powers, and launches a war against the surface world.

As the tentative attempts to conduct standalone films based on Green Lantern and Wonder Woman have shown, these tend not to be top-sellers for the DC Universe Original Animated Films as much as the tried and true regulars of Batman, Superman and Justice League do. (Although you would think that the popularity of live-action shows such as Arrow (2012-20), The Flash (2014– ) and Supergirl (2015-21) in the last couple of years would make these ripe properties for standalone films). In much the same way that director Ethan Spaulding’s previous outing Batman: Arkham Asylum was more a Suicide Squad film than a Batman film, Throne of Atlantis feels like a stealth attempt to conduct an Aquaman film that is sold as ostensibly being a Justice League film.

Aquaman has been a regular DC fixture since his first appearance back in 1941 – he was even a founding member of the Justice League in 1961. His story has generally remained that of the blonde-haired Arthur Curry born of a union between human Thomas Curry and Atlantean queen Atlanna who grows up with the ability to breathe underwater and communicate with sea life who becomes the king of Atlantis alongside his queen Mera. Other aspects have been added over the years, including the introduction of secondary characters like Aqualad, Aquagirl and an octopus sidekick Topo, as well as Aquaman’s earlier adventures as Aquaboy. Some of the incarnations from the mid-1980s onwards have messed around with the origin story but this was restored in DC’s The New 52 continuity reboot in 2011. Aquaman has for right or wrong become a joke DC superhero for the wimpiness of his powers with snide jokes being made most notably in tv’s Entourage (2004-11).

Aquaman had previously appeared on screen in various episodes of Justice League/Justice League Unlimited (2001-6) – although was notedly not a core member of the League in that incarnation. He made his first live-action appearance in an episode of Smallville (2001-11) played by Alan Ritchson. There was Aquaman (2006), a one-hour tv pilot produced by Warner Brothers starring Justin Hartley, although this failed to go to series. He was incarnated by Jason Momoa in Batman V Superman: Dawn of Justice (2016) and Justice League (2017) before getting a standalone film with Aquaman (2018), which surprisingly enough rehashes much of the storyline of Justice League: Throne of Atlantis but without the Justice League being present. Certainly, Throne of Atlantis, while not a particularly great DC Universe film, gives us a fair to okay Aquaman origin story and incarnates the character with suitably heroic dignity.

I am not a big fan of The New 52 and its often pointless rewriting of standard DC continuity, including a scene here where Lois Lane comes across Superman as Clark Kent out on a date with Wonder Woman where he is trying to introduce her to the idea of maintaining a secret identity. We also get a minor background cameo from John Henry Irons who of course goes onto become Steel.

Justice League: Throne of Atlantis is a fairly routine DC Universe Original Animated Film. One of the better aspects of Justice League: War was the snappy banter between the various superheroes as they came together and the various conflicts of personality. There seems to be some of that here – notably an amusing scene where Green Lantern gatecrashes Batman’s attempts to arrest The Scarecrow’s gang – but this is quickly sidelined. Once we get into action, the superheroic battles seem average for the genre, nothing standout. I also quibble with just how powerful the story ends up making the trident, which even has the power to throw around and cause Superman to bleed.