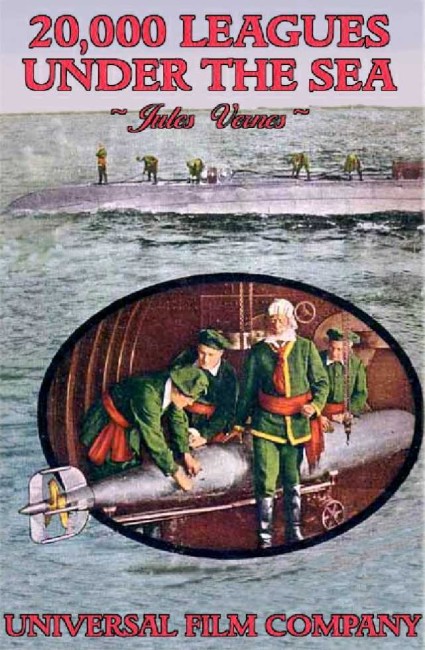 The French scientist Arronax joins the US Navy on the search for a sea monster that is terrorizing shipping. Their ship, The Abraham Lincoln, then has its rudder rammed by the monster, which turns out to be a submarine. The submarine’s creator Captain Nemo reluctantly rescues Arronax and his party after they are thrown overboard. Aboard the submarine, they witness the marvels of Nemo’s invention and the wonders of the seabed. At the same time, a group of soldiers escape a Confederate prison by balloon and land on a nearby island. Nemo secretly aids them with supplies. One of the castaways, Harding, befriends a savage girl living on the island, but she is soon fought over by the other soldiers. At the same time Charles Denver, a man from Nemo’s past, arrives on the island.

Twenty Thousand Leagues Under the Sea is a fascinating artifact from the silent era. Although prints have been in circulation for many years, it was not until its video release in the 1990s that many people had the opportunity to see this previously obscure film. It is a fascinating relic that shows just how accomplished early filmmaking was.

As the only other feature-length cinematically released adaptation of the Jules Verne story, Twenty Thousand Leagues Under the Sea makes interesting – perhaps inevitable – contrast to the more well-known Disney version 20,000 Leagues Under the Sea (1954) with James Mason. What becomes noticeable is just how definitive a version the Disney version became subsequently recognised as. This version lacks any submarines with plush, ornate retro-Victorian interiors.

The most notable contrast between this and the Disney version is the characterisation of Captain Nemo. There in nothing of James Mason’s brooding performance in Allan Holubar’s characterization – in fact, there is no villainous side to this Captain Nemo at all. He rams the Abraham Lincoln but there is no explanation of him destroying ships of war as part of his ‘mission’.

What is also noticeable about the film is that half of the screen story has been mixed in with Jules Verne’s Twenty Thousand Leagues Under the Sea sequel Mysterious Island (1875), which was about Confederate prison escapees who land on a desert island where they were aided by Captain Nemo. (Although the film paints the castaways as much more brutal and in-fighting than the more communally-minded, mutual survival oriented ones in the book. Indeed, the addition of Mysterious Island to the story mix unbalances and takes over in the latter half with much running around involving revenge on a rapist captain, Nemo’s daughter and the castaways).

More importantly, the film takes from Mysterious Island Jules Verne’s explanation that Captain Nemo is in fact the Indian Prince Dakkar. Where James Mason’s brooding performance became the definitive characterisation of Nemo that every subsequent performance in an adaptation of either 20000 Leagues Under the Sea, Mysterious Island or made-up sequel modeled itself on, the uncredited Allan Holubar’s Nemo is cast more as a movie cliché version of a Hindu – an old man in silks, bandana and long beard.

What is also noticeable about the two versions of 20,000 Leagues Under the Sea is their focus as science-fiction films. The sense of wonder in the Disney version was the retro-wonderment of a submarine as though it might be designed by a Victorian inventor; the sense of wonder in this version is simply seeing underwater photography for the first time. This was the first film to be filmed underwater, using techniques pioneered by the Williamson Brothers, who were some of the earliest deep-sea divers. Underwater photography has been rendered routine today but for an audience in 1916 seeing the film for the first time must have been a totally wondrous experience.

There is a ten minute sequence touring the ocean floor where we are given title-card narrated detail about what we are observing. Later we see divers fighting a shark and a sequence where they are attacked by an octopus. This latter is a sequence that makes one stop and think for a couple of moments – in addition to filming underwater, did the Williamsons not only go to the extent of building a mechanical octopus too or is it the real thing? Finally, one realises that octopi are not that big in reality and its flat eyes give it away, but it was certainly convincing for a time.

The first appearance of the full-size Nautilus – the camera irising out on it floating at sea is also impressive as are the apparently full-size staged sequences of it ramming ships – although the underwater shots of its hull are clearly just the same model shot repeated over.