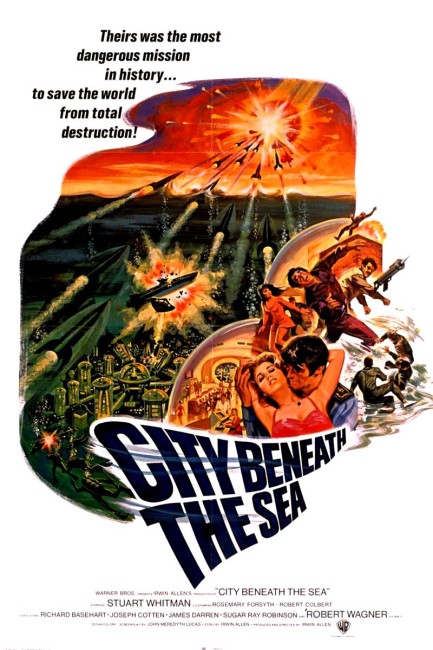 aka One Hour to Doomsday

Upon the orders of The President, Admiral Mike Matthews reluctantly takes back his old command, the sub-oceanic city of Pacifica. His old crew are resentful of his return due to the fact that Matthews was responsible for the death of a man during his previous command. The city is readied to store the USA’s gold reserves, along with the highly unstable explosive element H128, which can only be safely contained when surrounded by gold. Meanwhile, it is discovered that a meteor of ultra-dense matter is heading towards Earth and will impact with Pacifica in a matter of hours. Matthews orders Pacifica evacuated. However, thieves, aided by traitors among Pacifica’s crew, are planning to use cover of the evacuation to conduct a daring underwater raid and steal the gold.

City Beneath the Sea/One Hour to Doomsday was a tv pilot from producer Irwin Allen. With City Beneath the Sea, Allen was clearly hoping to continue the line of successes he had had with his previous science-fiction tv series Voyage to the Bottom of the Sea (1964-8), Lost in Space (1965-8), The Time Tunnel (1967-8) and Land of the Giants (1968-70), all of which had been audience hits.

City Beneath the Sea appears to have been intended as a variant on Voyage to the Bottom of the Sea. However, the pilot failed to make it to a series whereupon Irwin Allen shrewdly reissued it internationally as a feature film. Perhaps due to this lack of success – the first of his science-fiction series to flop – Irwin Allen thereafter gave up on tv (bar some occasional mini-series) and turned his attention towards big-budget disaster films. He first had enormous success with The Poseidon Adventure (1972) and then followed it with The Towering Inferno (1974), the infamous The Swarm (1978), Beyond the Poseidon Adventure (1979) and The Day the World Ended/When Time Ran Out (1980).

In more ways than one, City Beneath the Sea/One Hour to Doomsday bridges the turning point between Irwin Allen’s tv science-fiction and his disaster films – it introduces the idea of name casts (although Allen had always been a sucker for big name casts, as earlier films like The Story of Mankind (1957) demonstrate) and big scale disaster, while also still retaining the colourfully pedestrian pseudo-scientific ‘sci-fi’ of Lost in Space and the like (as well as casting a number of regulars from Allen’s previous series).

Like Lost in Space et al, the film is very much take it or leave it – if you come to bury Irwin Allen there is plenty here to pile on Allen’s grave, but if you like the mindless pulp pantomime that Allen does unmatched – something he never managed to transfer to his large budget films – then here’s to enjoy. Allen directs in his typically stodgy way. There are lots of colourful sets and some good effects, although, as always, Allen substitutes coloured lights, bleeps and pseudo-scientific sounding jargon in lieu of any credible science. The character of the merman played by Burr de Benning interestingly prefigures the hero of tv’s The Man from Atlantis (1976-7).

Irwin Allen’s other works of genre interest are:– as producer/director/writer of The Story of Mankind (1957) wherein various historical figures up in Heaven debate about whether to destroy humanity, which becomes an opportunity for Allen to rehash stock footage from various historical spectacles; as producer/director/writer of the remake of The Lost World (1960); as director/producer/writer of the Voyage to the Bottom of the Sea film (1961); as producer of the tv series’ Voyage to the Bottom of the Sea (1964-8), Lost in Space (1965-8), The Time Tunnel (1967) and Land of the Giants (1968-70); as producer of The Time Travelers (1976), another unsold tv pilot, written by Rod Serling; as producer of the tv mini-series The Return of Captain Nemo (1978), which was theatrically released internationally as The Amazing Captain Nemo (1978); as producer/director of the notoriously bad big-budget disaster film The Swarm (1978) about killer bees; and as producer of an all-star tv mini-series adaptation of Alice in Wonderland (1985).