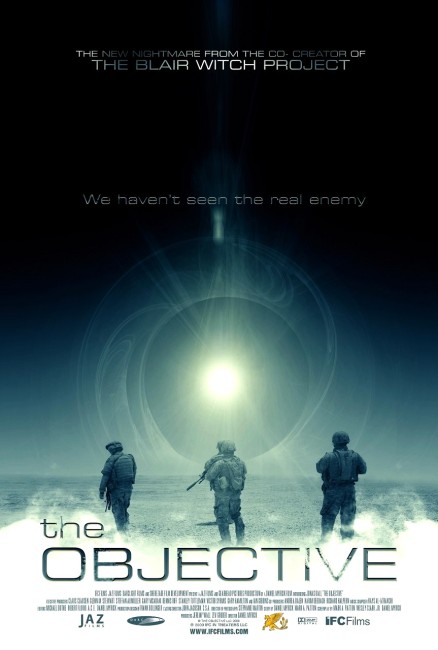 In 2001, CIA agent Ben Keynes is sent on a mission to the Ghazni Province in Afghanistan. Satellites have detected a radiation source and his objective is to determine what it is. He is placed in charge of squad of Special Forces. The ostensible cover he gives them is the goal of finding a Mohammed Aban and getting him to write a statement supporting the US military’s presence in the area. With the use of a local guide, their search takes them to a mountain that is regarded as forbidden by the locals. As they approach the mountain, their vehicle breaks down. Forced to continue on foot, they begin to experience strange things, including lights in the sky.

The Objective starts promisingly. There’s a mysterious something and a military sortie despatched in search of it. Myrick has made a strong effort to credibly ground the film. He has clearly sought to make the military scenes look believable to the extent of casting military veterans (Matt Anderson and Jon Huertas) as the soldiers and co-writing with Wesley Clark, Jr., the son of retired US Army general and 2004 Democratic presidential contender Wesley Clark. Myrick has gone to shoot in Morocco rather than Afghanistan but it still gives the film a feel of the landscape and the Islamic culture of the region. Moreover, Myrick is not subverted by making a film about the pumped heroics of soldiers in action – thinking about you and your ridiculous flag-waving Peter Berg – just a credible portrait of people reacting to something anomalous.

It soon becomes apparent that Daniel Myrick is essentially making another variant on The Blair Witch Project – instead of a group of students with video-cameras lost in the woods, he gives us a squad of soldiers armed with rifles lost in the desert of Afghanistan; instead of mysterious supernatural happenings, we have mysterious lights in the sky that or may not be UFOs or supernatural entities from local mythology. The main difference between the two films is also that The Objective is not shot as Found Footage.

Myrick creates quite a sense of the uncanny in the build-up with the men seeing lights in the sky and encountering strange locals. On the other hand, as soon as you realise this is a variant on The Blair Witch Project, it becomes apparent that it is going to be one of those open-ended films that is all build-up without any real answers. This proves to be the case with the film arriving at an end that never even leaves us sure whether the menace encountered is supernatural or extra-terrestrial in nature. As such, the film is okay but it never produces anything that makes you jump in your seat or unsettles you in any way. Gradually, the build-up tapers off into a lack of overall event.