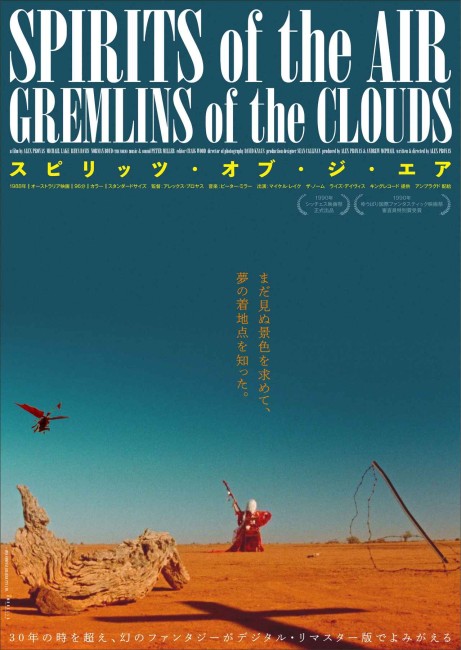 The wheelchair-ridden Felix Crabtree lives in a house in the desert in the post-apocalyptic wasteland along with his sister Betty. One day, their solitary idyll is interrupted by the appearance of a man who collapses outside the house. They tend him back to health. The man introduces himself as Smith. Smith wants to depart but Felix shows him that the direction he plans to take ahead is blocked by a wall of mountains. Felix explains his plan of building a flying machine so that all three of them can fly over the range. Smith agrees to stay for five days only and help Felix construct his flying machine. At the same time, Betty regards Smith as The Devil and wants him gone.

Spirits of the Air, Gremlins of the Clouds was the first film for Egyptian-born, Australian-raised director Alex Proyas. Prior to this, Proyas had worked as a music video director, creating clips for bands like INXS, Crowded House, Fleetwood Mac and Sting, along with various commercial work. Proyas’s big break came with his next film The Crow (1994), which proved a reasonable international hit. Proyas followed this with Dark City (1998), which I would cite as the best science-fiction film of the 1990s. These two works pegged Proyas as one of the most exciting genre directors of the coming decade. He next made the non-genre Garage Days (2002) about an Australian band and returned to genre material with I, Robot (2004) and Knowing (2009), both of which failed to hold up to the promise of his earlier work. He next made the glorious mad Gods of Egypt (2016) but that was a commercial flop that disappeared amid controversy over whitewashing in the casting.

Spirits of the Air, Gremlins of the Clouds played at some film festivals when it came out. I had heard about it for years but it remained the most obscure film in Alex Proyas’s oeuvre. I was finally able to find a copy and watch. Although it is not an entirely uninteresting film, I felt disappointed after the wait. You can see however why it did not achieve much buzz in the day.

1987 was when Australia had just had the massive worldwide hit of George Miller’s Mad Max 2 (1981). This was quickly followed by a spill of copycat films from around the world – see After the Holocaust Films. Spirits of the Air, Gremlins of the Clouds is sort of one of these but also not. Proyas dispenses with the action movie focus and essentially uses the same post-holocaust venue to makes an arthouse film. There were other efforts around this time that took a similar arty route, the best of these being Luc Besson’s Le Dernier Combat (1983) and The Salute of the Jugger (1990).

The film resembles very much a student film, a work by a filmmaker who had not learned pacing and the importance of story and is more determined to do something stylistic and offbeat. This is particularly evident when it comes to the house in the desert, which is decorated with colourfully quirky bric-a-brac – lit candles everywhere, mobiles, clouds painted on the walls, Michael Lake riding around in a wheelchair with patterned wheels, Rhys Davis in full 18th Century French court costuming. The performances come with an eccentricity – Michael Lake plays with weird mannerisms and seems an oddity, although is far eclipsed in this regard by Rhys Davies as his sister whose performance is all frightened whimpers and cowerings, even scenes with her epileptically writhing on the floor (why we never find out). Even the title, which is certainly is interestingly evocative and presages a much more fantastical film than we get, has no actual meaning that one could discern in the film.

There is sort of a plot to the film – stranger arrives at the house, is persuaded to stay by Felix, agrees to help build a flying machine, Betty wants him out. That is about it, no real development or progression beyond that. The big problem is that there is no drama to the plot. It is mentioned that Smith is being pursued and that he has five days to cross the mountain range – we never get any details more than that – but Proyas does not do what any other film would and develop suspense out of these elements. Moreover, the film arrives at an ending that allows what build-up and anticipation the film had going for it to just dissipate.

Moreover, while Proyas labels the film as a post-holocaust work, it is very ambiguous and uncertain about actually being one. Proyas creates a beautifully desolate opening montage filled with faded Marlboro billboards, skeletal scaffoldings of buildings, rows of upended cars all against the orange desert of the Australian Outback. (Given the lack of greenery or indeed anything else around them, you wonder what it is the brother and sister actually manage to survive on and where they get their supplies). On the other hand, there is almost nothing that happens in the film that could not be happening contemporary in a story concerning a brother and sister that live in a house in the desert.