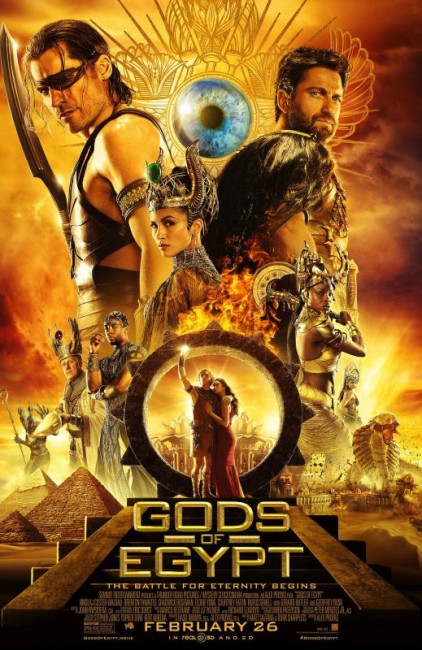 In Egypt, the gods walk amongst the mortals and reign over the land. The aging Osiris is about to abdicate the throne in favour of his son Horus when his jealous other son Set arrives with his army and kills Osiris. Set plucks out Horus’s eyes and is about to kill him too when Horus’s favourite Hathor pleads for his life. Taking the throne, Set builds a massive obelisk as monument to his grandfather, the sun god Ra. Many remain loyal to Horus. The young mortal thief Bek is persuaded by his love Zaya to break into Set’s heavily booby-trapped vault and steal back one of Horus’s eyes. The two flee after being spotted, only for Zaya to be killed by an arrow fired by her father. Bek goes to Horus, agreeing to return his eye if Horus will bring Zaya back from the afterlife. With Set seeking to steal the powers of the other gods to become even more powerful, Horus aided by Bek sets out to gain the help of his grandfather and find a means whereby Set can be defeated.

Australian director Alex Proyas, who is of Egyptian parentage, had been on my radar for several years. Proyas made his directorial debut with the obscure post-holocaust film Spirits of the Air, Gremlins of the Clouds (1989). Proyas became somebody to watch after his second film, the first The Crow (1994), and a name of great potential after making Dark City (1998), which I will happily argue was the best science-fiction film of the 1990s. On this side of the 2000s, Proyas has become a different prospect however. His version of I, Robot (2004) was a heavily disappointing version of the Isaac Asimov stories and Knowing (2009) left everybody scratching their heads what it was about. During this time, Proyas has been more interesting for the projects his name has been associated with – a Silver Surfer film, a film version of The Tripods and adaptations of Paradise Lost (1667) and Robert Heinlein’s The Unpleasant Profession of Jonathan Hoag (1942) – than the ones that have actually gone to the camera.

Gods of Egypt seemed a troubled production. Alex Proyas had originally intended to pitch the film as a series in competition with the various franchise works out there. However, the prospects did not start to look good some months out. The first trailer was greeted with ridicule. The biggest issue to emerge was the whitewashing controversy where much of the negative buzz surrounding the film concerned the fact that all of the Egyptian characters in the films are played by Caucasian actors. This is a charge against Hollywood films that has become more vocal in recent years, notedly with Exodus: Gods and Kings (2014) and Aloha (2015), peaking just before Gods of Egypt premiered with the #oscarssowhite controversy. The controversy was such that Proyas recounts he was scapegoated and not even invited to the film’s premiere.

I stand with those who argue that we need more diversity in Hollywood and that ethnic roles should be cast with people from the same background for authenticity’s sake as opposed to with predominantly white names in order to carry the films at the box-office. On the other hand, is this something that damaged Gods of Egypt‘s prospects as many claimed? Do audiences really sit about and think “No, I am going to boycott this because the actors don’t look Arabic?” when they decide what they want to watch as some of the box-office forecasters for Gods of Egypt have been directly claiming. Does it make works like The Thief of Bagdad (1940), The 7th Voyage of Sinbad (1958) and The Golden Voyage of Sinbad (1973) less great because they feature white Arabic heroes? Indeed, why does this whitewashing issue seem to emerge only now yet was absent in the cases of other films of recent like 300 (2007), Percy Jackson & The Olympians: The Lightning Thief (2010) and Immortals (2011) for giving us white-faced Greeks?

Whatever the case, after being made for a $140 million budget, Gods of Egypt opened with only a pitiful $14.2 million opening weekend in the US, $31 million in its US run (although much more internationally), which makes it one of the biggest box-office flops in recent memory.

The myths of Ancient Egypt have largely been untapped on the screen before. Pseudo-Ancient Egyptian myths, curses and cults have turned up in numerous horror films, while there have been a good number of works that have bought into the idea of the pyramids being built by aliens but you get the impression that not a single one of these have even read up on the original legends – The Book of the Dead is frequently treated as though it were some occult tome of power, for instance. There has been the odd appearance of Ancient Egyptian deities in films such as Immortal (ad vitam) (2004), The Curse of King Tut’s Tomb (2006) and The Pyramid (2014) but little more can be said about these. Indeed, the most substantial treatment that you can stretch to think of was the Doctor Who episode Pyramids of Mars (1975), in which the warring Egyptian gods are revealed as aliens known as the Osirians.

Gods of Egypt feels like the Ancient Egyptian myths by way of Michael Bay. Alex Proyas has determined to put on an epically spectacular production. The film seems to have something awe-inspiring in scale happening every moment – gods taking to the air on wings, transforming into armoured animal forms, massive power blasts from staffs, people scaling vast obelisks, pyramid death traps, sphinxes, giant fire-breathing snake creatures. Every entrance into a pyramid/vault comes with massive death traps or puzzles to be solved and ends with said edifice crashing down around them, every action move has been maximised for the 3D camera. However, after you sit through one more fight with a mythical creature, one more god wielding massive power blasts, there comes where all the epic scale and overkill starts to become tedious. It just starts to be gratuitous GGI for CGI’s sake that washes over you without any meaning.

Gods of Egypt is often a tedious and a stupid film. That doesn’t mean it is an uninteresting film but it is pitched down in ways that keep grating on your nerves. One part of it comes in the whole whitewashing controversy – when you see Gerard Butler or stalwarts of the Australian acting profession such as Geoffrey Rush and Bryan Brown playing Egyptian gods, the effect is not one of the believing you are watching different characters but serves to pull you out of your suspension of disbelief and makes you think “Oh that’s Bryan Brown playing Osiris … that’s Geoffrey Rush in old age makeup.” You never had the same feeling seeing any of the name actors in say The Lord of the Rings.

Things are not helped by a terrible performance from Gerard Butler who tackles his role with the inchoate bullishness Sylvester Stallone usually reserves for his performance. Although the worst part about this is actually the dialogue that each of them gets. This has a gratingly glib incongruity and a flip modernism that sinks in the mouths of everybody who voices it – lines like “Where’d you get that many scorpions?” or “You better get it attended to.”

And yet for all its crazy misguided loopiness, there came a point where I suddenly started to like Gods of Egypt. The Twitter mob and internet-raised millenials have no patience with films, where everything now seems to only exist between the polarities of ‘awesome’ and ‘worst film ever’ (accompanied by threats to curb stomp the director’s head). The time I started watching fantastic films was not one of such copious overflow. The sheer glut of product now available seems to have erased the ability to bear with a work through its uneven patches, to go out on a limb with a director’s pretensions to see where they take you, of finding the imaginative nuggets that often glisten through tatty effects and poverty row budgets.

Gods of Egypt is a film that sits here. On one side of the coin, it is a film with a numbing overkill of effects, has casting and dialogue that constantly wrenches you out of your suspension of disbelief. On the other hand, it is a film of giddy grandeur. There are some moments of pure beauty to it – like the journey up into orbit aboard Ra’s solar barge where we watch him dragging the sun above the horizon of a flat Earth and doing battle with the massive dark cloud beast Apophis. It can’t be entirely possible to hate a film that features people travelling on chariots drawn by giant beetles the size of horses or hopping aboard a carriage tethered to a flock of birds.