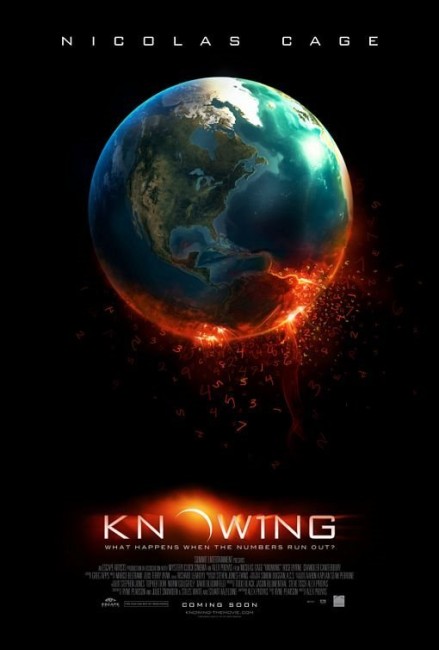 In 1959, William Dawes Elementary School in Lexington, Massachusetts, comes up with the idea of burying a time capsule on the school grounds to be opened in fifty years time. Each of the students puts in a drawing of what they believe the future will look like. Young Lucinda Embry’s contribution is a page of numbers. In 2009, John Koestler is an astrophysics professor at MIT who is raising his son Caleb on his own after the death of his wife. John accompanies Caleb to the school for the opening of the time capsule. The piece of paper that Caleb pulls out happens to be Lucinda’s page of numbers. Afterwards, John puzzles over the numbers and then realises that each numeric sequence contains the date of a disaster that occurred after the time capsule was buried and the exact number of people killed in it. John also realises that three of the disasters have yet to happen. He is witness as a plane crashes nearby – and on the date and with exactly the number killed as predicted by Lucinda. He realises that the other numbers are latitude and longitude of the area where the disasters occur. He contacts the late Lucinda’s daughter Diana Wayland and sets out to prevent the other disasters from occurring. The two of them then discover that the final sequence means that all life on Earth is going to be extinguished by a solar flare from the sun.

There was a time around the start of the millennium when Egyptian-born, Australian-raised director Alex Proyas seemed like the future of genre cinema. Proyas gained fame as a commercials and music video director before debuting with the surreal post-apocalyptic film Spirits of the Air, Gremlins of the Clouds (1987) and then the hit of The Crow (1994). Proyas then went onto the amazing Dark City (1998), which is perhaps the finest science-fiction film of the 1990s.

Even though Dark City was not a wide box-office success, Proyas seemed to have a strong genre career ahead of him and has been associated with a number of projects including a standalone Silver Surfer film, a film version of The Tripods, Paradise Lost, Dracula: Year Zero and an adaptation of Robert Heinlein’s The Unpleasant Profession of Jonathan Hoag (1942), among others. Besides Knowing, the two other Alex Proyas projects that emerged during the 00s were the non-genre Garage Days (2002) about an ingenue rock band in Sydney and I, Robot (2004), which alas turned the smartness of Proyas’s earlier films and Isaac Asimov’s ideas into merely a big-budget special effects film. Proyas also executive produced Riverworld (2003), the disastrous tv adaptation of Philip Jose Farmer’s classic series of afterlife books.

Knowing comes with an interesting idea – a time capsule is opened and is found to contain a page of numbers that transpire into dates, casualty figures and geographical coordinates of the major disasters in the fifty years since the capsule was buried. There is a good idea here. It puts Knowing into the same territory as a film like Paycheck (2003), which had Ben Affleck receiving clues from the future of things that were about to happen, or perhaps even more so of Thrill Seekers (1999) where Casper Van Dien encounters time travellers come back to view disaster sites and then armed with news of several disasters about to happen sets out to stop them. Perhaps you could see Knowing as a conceptual collision between the similarly apophenically obsessed The Number 23 (2007) and Final Destination (2000) and sequels.

The disappointment about Knowing is just how middle-of-the-road Alex Proyas makes it. A premise like this should be rich in drama, suspense and unexpected twists and turns – only Proyas and the script proceed at a slow, sedately measured pace. The unfolding of the mystery is placid – everything in the film (at least up until the left field ending) happens exactly where one can see it going. Nicolas Cage and Rose Byrne give okay but hardly standout performances in their respective parts. Even the depictions of the first two disasters are passable but look more like visual effects displays than they do dramatically enthralling disaster sequences. (Certainly, the climactic appearance of the ship and the mass destruction sequences are much better – but this whole section seems to have strayed in from another film).

That does however bring one to the ending, which leaves audiences exiting the theatre going WTF. [PLOT SPOILERS]. Here we learn that the patterns of numbers have been sent to various people by … some sort of celestial beings. The film is not any clearer than that, suggesting at once that the beings are both angels and aliens. The beings then take Nicolas Cage’s son (Chandler Canterbury) and Rose Byrne’s daughter (Lara Robinson) up with them, having selected them to come (for reasons never specified) and it would appear act as a new Adam and Eve on another planet following the death of all life on Earth. It is an M. Night Shyamalan-esque left field twist ending of the worst order, not to mention one undeniably borrowed from Close Encounters of the Third Kind (1977) and having been pushed to the point of overload in terms of loopy religious symbolism.

Nor is it an ending that makes a whole lot of sense. There is no explanation, for example, why the beings seem to be giving some people these prophetic visions – they never seem to relate in any way or have any bearing on the deliverance that comes at the end. And even when the prophecies are received, there does not appear to be anything that Nicolas Cage or Lucinda can do to prevent them (not exactly great dramatic potential there – man receives a prophecy but it turns out there is nothing he can do with his knowledge of the future to avert anything. Crucially, the film’s title is Knowing as opposed to Doing). We also have no idea why the aliens/angels seem to leave small black stones behind whenever they appear. It feels exactly like the reels of two different films have gotten mixed up – a film that starts about a series of prophecies then suddenly morphs into this weird quasi-Christian piece about angels coming to save the chosen from the end of the world and set up anew on another Edenic planet.

There are a lot of basic plot holes too. For one, a solar flare would not have the effect of destroying life on Earth – solar flares do not reach all the way from the sun to the Earth. Even if a solar flare did, it would certainly disrupt telecommunications (which the film has the flare sometimes doing but then not when it suit its convenience) and have some interesting effects like a massive increase in the activity of the aurora, temporary disruption of power grids and causing compass needles to go awry. BUT a solar flare would hit the Earth as hard radiation, not as a fireball, and thus wouldn’t have the effect of obliterating buildings as it is seen as doing at the end. I am not sure if it could erase the ozone layer but the effect of a missing ozone layer would be of people being affected by naked ultraviolet rays ie. it would produce severe sunburns and skin cancers. People could probably stand raw exposure for some time and certainly would survive after the destruction of the ozone layer as long as they did not go out into direct sunlight.

What the film seems to be talking about is not a solar flare but an Interplanetary Coronal Mass Ejection (ICME) – a blast of superheated plasma that could well incinerate life on Earth if not the entire planet itself. The problem with this would be the speed that a CME would travel at and the fact that the Earth’s surface has only one side of the planet turned towards the sun at one time – the effect would be of a large round object being blasted with a flame thrower for about 30 seconds where one side would be torched but the other side (the night side of the Earth) would remain relatively unscathed.

The other scientific quibble one has about the film is the latitudes and longitudes given. Geographical coordinates are measured in terms of degrees north or south of the equator (latitude) and east/west from the reference point of Greenwich in England (longitude). Measurements are determined as either plus or minus in regard to the direction they head from these reference points – unfortunately, the numbers in Lucinda’s chart offer no positive/negative qualifiers to the numbers. Moreover, we only see the numbers divided into degrees and minutes of measurement. This means that the areas that are being given would only be about one square mile in area, while the film has Nicolas Cage being able to pinpoint locations down to a single intersection in New York City.

Knowing falls into a modern genre of big budget disaster movies. In that modern gore and sadism films have been nicknamed Torture Porn, one feels that they can call these films Disaster Porn in the same sense that they produce displays of death and mass destruction for one’s entertainment. We have seen a number of these in recent years – efforts like The Day After Tomorrow (2004), War of the Worlds (2005), I Am Legend (2007), The Mist (2007), Cloverfield (2008), The Day the Earth Stood Still (2008), The Happening (2008) and 2012 (2009). These are post-9/11 films that stare mass destruction in the face and ponder on the human response to it. Each of these arrive at differing conclusions and hopes – belief in family (War of the Worlds); that there is nothing we can do at all (Cloverfield); that in the face of disaster we would be reduced to bickering and even if we did know what to do there is no guarantee it would be the right choice (The Mist); that we will survive if we cling to human decency rather than act with self-interest (2012); that the nature of the disaster is beyond science and unknowable (The Happening); that we are being punished for our despoliation of the environment but that our humanity holds some essential good that can change things (The Day the Earth Stood Still); and that there is divine purpose in all of this (I Am Legend).

Knowing seems to fall into the vein of thinking shared by I Am Legend and M. Night Shyamalan’s Signs (2002) in that it is a debate about predestination and divine purpose. Nicolas Cage has a speech in class early in the film where he poses the question of whether everything in the world has a divine purpose (using as an example the Earth being positioned at a distance from the sun that is perfect for supporting life) or is purely random, at which point there is a meaningful pause in his voice as he reflects that this would mean there is no purpose to anything. It should be pointed out that what the film is doing here is reiterating in all but name the evolution vs creationism/Intelligent Design debate. Indeed, the abovementioned example that Nicolas Cage uses about the convenience of the Earth to support life is one of Intelligent Design’s prime arguments. The entire thrust of the film seems to be that there is purpose and that everything has been predestined.

The script then trails off into some puzzling nonsense about angels coming to save us from the end of the world and take a selected few off to create a new Eden on a new planet with a Tree of Life plonked in the midst of a mistily hyper-real field. However, the script is such a muddle that it is hard to work out what the film is trying to say – the end message would seem to be that, yes, there is a purpose to everything but even if you knew what it was it would not help one iota as we are all doomed anyway.