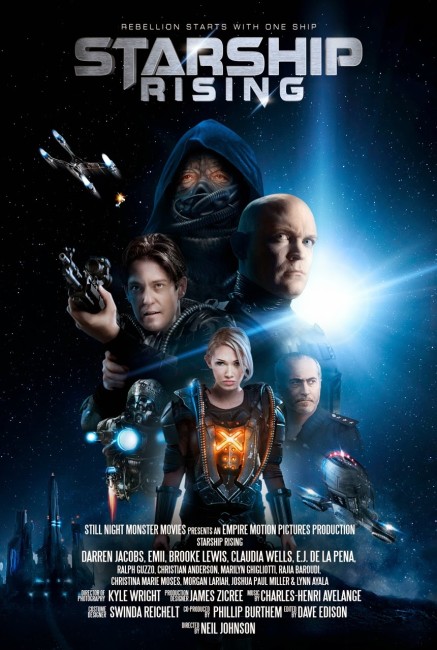 John Worthy grew up in the galactic Federation where his father was executed for speaking up against the rule of the Paleo-Pope. Worthy joins the military and is assigned as a Flight Lieutenant aboard the Federation’s top vessel Starship One under Captain Savage. However, when Worthy finds Savage is prepared to destroy the Earth, which is a forgotten backwater in this era, he leads a mutiny and kills her. He seeks refuge on Earth where Xarsis insists he take her daughter Jolli on board as part of his crew. They make an escape before the Earth comes under attack by the Federation and is nuked. Worthy and Jolli become lovers. Worthy is regarded as an outlaw and the ship sought by General Gustav, the military leader of the rival empire Terra Nostra that is conquering its way across Federation territory.

Starship Rising was the first in a duo of films made by Johnson and was followed by Starship Apocalypse (2014), which was released four months after this. Johnson appears to have shot both films back-to-back using the same cast and sets. I had seen Starship Apocalypse earlier and wasn’t aware that it was a sequel so had to go check out Starship Rising to make sense of the milieu.

Johnson’s Starship films are Space Operas. Johnson does a solid shuffling of many essential tropes of the genre – the planet-hopping locales; the rogue ship’s captain and his ragtag crew; the threat of the dark lord and his evil empire; assorted space battles. Certainly, there is the addition of a number of elements that make this somewhat different – the hero comes from an authoritarian world dominated by a strange religion headed by a ‘Paleo-Pope’; there is the visit to Earth, which is a neglected backwater. The costumes and sets have been designed in black and navy blues, which gives a darker, much more Gothic look than the average space opera. Johnson also appears to be a fan of the British space opera tv series Blake’s 7 (1978-81) and names various places and organisations after locations on the show – Gauda Prime, Cygnus Alpha and the Terra Nostra.

One aspect of Neil Johnson’s films are that they have exceptional visual effects despite being made on budgets that look like little more than two used shoestrings. Johnson goes way above and beyond with the work here. Some of the planetaryscapes and city shots have such a degree of depth they could easily suffice in A-budget theatrical films. Johnson also stages some immensely exciting space battles. And the result is a modest little film that far exceeds its expectation.