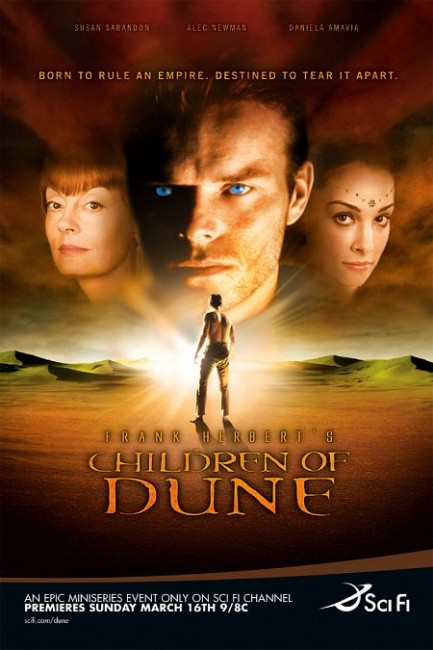 Paul Muad’Dib’s Fremen jihad has swept across the galaxy. Paul wishes that he could stop the bloodshed being conducted in his name but feels powerless in the face of the predetermined destiny that his precognitive powers show lies ahead. There are many who seek to assassinate him. Conspiring with Princess Wensicia, the guardian of the heir to the Emperor’s deposed House Corrino, the Bene Tleilaxu genetic engineers resurrect a ghola (or clone) of Paul’s late friend Duncan Idaho, as well as send a shape-changing Tleilaxu Face Dancer to get close to Paul. Paul’s wife Chani becomes pregnant with twins and dies giving birth. Paul realises the only way to defy the fate ahead is for him to walk out into the desert. With Paul gone, the imperial throne passes into the guardianship of his sister Alia. The twins, Leto and Ghanima, grow into adulthood. In an attempt to bring on prescient visions of her own, Alia takes too much spice and is driven mad by the voices of her ancestors crowding inside her head. She is now taken over by the voice of her grandfather Baron Harkonnen. Paranoid, she begins a crackdown on perceived enemies. This pushes the Fremen, who perceive her as The Abomination, to the point of civil war. Meanwhile, believed killed in an assassination attempt, Leto travels into the desert, seeking the Golden Path that his father never had the courage to take, something that requires him to meld with the sandworms and evolve beyond human form.

New Amsterdam Entertainment, The Sci Fi Channel and director/writer John Harrison had a reasonable degree of success with Dune (2000), their mini-series adaptation of Frank Herbert’s classic science-fiction novel Dune (1965). Mindful of that success, the same people returned with this sequel. The title is confusing, as Children of Dune (1976) is in fact Frank Herbert’s third Dune book. What one realises as they sit down to watch the production is that the previous mini-series’ director John Harrison, who only writes the teleplay this time, has adapted two Dune books – Frank Herbert’s second and third sequels, Dune Messiah (1969) and Children of Dune.

The tv version of Dune was excellent but Children of Dune disappoints. One of the big letdowns is that it lacks the same dense cultural and religious background that the first series did. Although the problem here is not the mini-series’ fault, rather one that was created by Frank Herbert. All of Herbert’s book sequels dropped the study of desert culture that was an integral part of Dune and instead focused on the labyrinthine plots and counter-plots between the various factions. Indeed, the machinations of the book sequels became so convoluted that this reader often found it difficult to keep track of what was happening.

Certainly, both Dune Messiah and Children of Dune seem easier to follow here on the screen, although maybe that is just in seeing the stories given visual interpretation. John Harrison has simplified the books in places – there are less conspiring parties involved in the creation of the Idaho ghola; Wencisia has a larger role; Reverend Mother Mohaim is murdered early in the show but wasn’t in the books; there is no mention of how Ghanima hypnotises herself to believe that Leto is dead; and Harrison condenses and simplifies the dramas that come together at the climax. That said, the rest of the mini-series is very faithful to the two books.

The problem with Children of Dune is also in part the new director Greg Yaitanes, a veteran of numerous tv series from Nash Bridges, V.I.P., Cleopatra 2525, The Invisible Man, Alias, Cold Case, Lost, House M.D. and the various incarnations of CSI. Greg Yaitanes directs a competent enough show but never seems attuned to the culture, the characters or the design elements in the way that Harrison was in the first series.

Many of the visual effects – the planet scapes, the Guild Navigator, the scenes with Alia training with the blades – seem obviously like they are CGI effects. This is especially so in the attack of the Laza Tigers and the shots with the sandworm imprisoned between three canals (where the water does not at all flow like natural water), and Leto’s flight into the maw of the sandworm at the start of the second part, which fails to convince dramatically through it being very obviously a CGI effect. Although the effects team do manage one excellent set-piece during the capture of the sandworm.

The show gives evidence of being a rush job – the effects, the sets and the costumes lack the extravagance and are certainly not crafted with the flourish they were in the first series. There are also none of the beautifully abstract desertscapes that we saw on Paul and Jessica’s journey during the middle of the first series. The desert scenes are clearly only digital inserts and elsewhere it often looks like actors are simply standing in front of CGI inserts in lieu of sets.

Children of Dune brings back many of the same cast from Dune – Alec Newman, P.H. Moriarty, Ian McNeice, Julie Cox, Zuzana Geislerova and Barbara Kodetova. Although elsewhere, the mini-series recasts a number of the roles to dubious result. The role of Stilgar is far less effectively recast with British playwright/actor Steven Berkoff. German actor Uwe Ochsenknecht was excellent as Stilgar in the first series, bringing a calm dignity, whereas Steven Berkoff has a brash anger that is close to the surface and he seems miscast. Alice Krige replaces Saskia Reeves as Lady Jessica but fails to do anything exceptional with the role, although for that matter Reeves failed to either, while neither actress is a patch on the regally elegant Francesca Annis in the David Lynch film version Dune (1984).

Disappointingly, Julie Cox, one of the great joys of the first series, is not given much to do this time. Greek model/actress Daniela Amavia makes for a lusciously beautiful and dangerous grown-up Alia but the character lacks the depth she had on the page and eventually only becomes a stock one-dimensional villainness. There is also a different actor playing Duncan Idaho, although this is not such a big deal as Idaho was a minor character in the first series.

One of the best pieces of the casting here are Jessica Brooks and a then unknown James McAvoy, the two actors playing Leto and Ghanima, who are extremely well paired and play with great intelligence and natural charisma. Surprisingly, Susan Sarandon turns up as Wenciscia, although the disappointment for an actress of Susan Sarandon’s calibre and recognition is that the role she is placed in is a minor one and fairly one-dimensional.