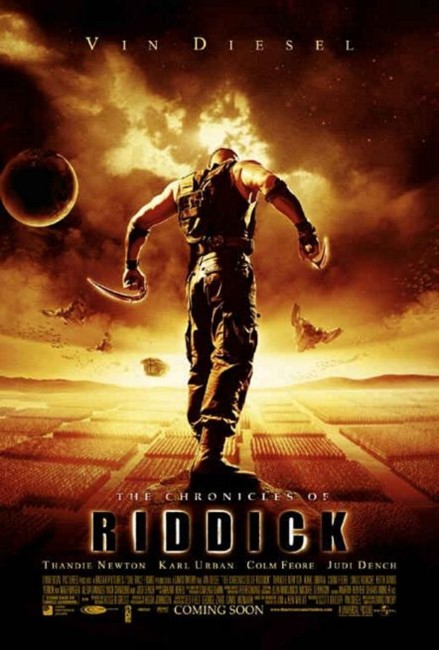 Fleeing from bounty hunters, Riddick travels to Helion Prime in search of the person who posted the bounty against him. He meets up with the imam who asks Riddick’s help in protecting their world against the onslaught of Necromongers who are sweeping across the universe, converting whole planets to their religion and destroying those that refuse. Riddick meets a member of the ethereal Aereon race who tells him he is one of the now extinct Furions, the only race capable of and destined to stand up to the Necromongers. Riddick wants no part of this but then the Necromongers arrive on Helion Prime. Riddick is taken prisoner but makes an escape, only to be captured by the bounty hunter Toombs who takes Riddick to the sun-scorched prison planet Crematoria to claim the bounty. However, this is part of Riddick’s plan to rescue Jack, the girl survivor from the Hunter-Gratzner crash, now a tough mercenary calling herself Kyra, who is a prisoner on Crematoria. As the Necromongers come pursuing Riddick, he must lead a group of prisoners across the planet’s surface, racing before the deadly sunrise, the rays of which can incinerate a human being, to get to the only vehicle capable of escape.

The one David Twohy film that has gained the most acclaim was Pitch Black (2000), an original and intelligent planetary survival story that was conducted with an exceptional degree of suspense and finely wrought characterization. Pitch Black also brought to public attention a young actor of ambiguous ethnicity known as Vin Diesel, who has since gone on to join the stratosphere of $10 million plus salaries.

While Pitch Black was fairly much a hard science story, The Chronicles of Riddick resembles something akin to the Warhammer role-playing game scenario and novels, while the Necromongers bear more than a few passing resemblances to Star Trek‘s Borg, passing across the universe assimilating all cultures into their collective. (The one minor complaint I would make about the film is that David Twohy never makes it clear what the Necromongers do to the populaces they take over – while he gives us the appearance that they possess people in some way and/or steal their souls, among those that we meet all that appears to have happened is that they have changed their loyalty to the Necromongers but otherwise are still capable of scheming against their leader and able to throw off Necromonger loyalty when they choose to).

Most of all, The Chronicles of Riddick feels like a fantasy story that happens to be told in science-fiction terms – Colm Feore is the soul-stealing dark lord, his spaceship is even akin to a castle; Riddick now becomes a reluctant hero akin to a Conan the Barbarian rather than the serial killer he was painted as in the first film and is naturally the prophesied saviour; Judi Dench plays an oracle and so forth.

The Chronicles of Riddick was David Twohy’s biggest budgeted film to date with a reported $105 million budget. All of Twohy’s other films have made a virtue of their low-key lack of flash. While Twohy does use effects houses in his other films, he does not make blockbusters that are driven by empty-headed CGI effects like so many of his contemporaries – his films are driven by story and when he does employ effects it is with subtle and sparing regard. On the other hand, The Chronicles of Riddick is a film designed to play into the dizzyingly scaled CGI spectacle that drives most modern science-fiction/fantasy blockbusters.

To Twohy’s regard, The Chronicles of Riddick still holds up well amidst this. There are some spectacular sequences with massed invading ships wreaking devastation, exploding, shots from planetary orbit and such like, however these are not the be all and end all of the film. The best element is the production design, where the film comes with a distinctive dark and Gothic look – particularly impressive are the giant mausoleum spaceships of the Necromongers and their costuming, all beaten metal armour with faces seemingly embossed everywhere.

David Twohy tells a complicated story – he even oversaw a 30 minute animated short The Chronicles of Riddick: Dark Fury (2004), which came out at the same time the film did, in order to explain the backstory in regard to what happened to Riddick, Jack and the imam between Pitch Black and The Chronicles of Riddick and why Riddick is being pursued by bounty hunters.

Twohy crafts a scene about three-quarters of the way through the film akin to the suspenseful journey by night that took place in Pitch Black where Vin Diesel must lead a group of escaping prisoners across a planet’s surface, racing to get to safety as they are pursued by the terminator line of a rising sun that is capable of scorching people alive. (Although, I must admit that I had some dubiousness about the party’s being able to avoid being incinerated simply by hiding out of direct sunlight, and of Vin Diesel managing to survive without burns or even a suntan simply by splashing himself with water and swinging through the sunlight on a rope). It is an intensely suspenseful sequence, even if it is a lesser (and much shorter) version of Pitch Black‘s classic night journey.

Since coming to stardom in Pitch Black, Vin Diesel has gone onto super-stardom in films like The Fast and the Furious (2001) and sequels, the mind-numbingly awful xXx (2002), A Man Apart (2003) and the utterly lame The Pacifier (2005), which have tended to wear thin the dangerous and driven presence that Diesel crafted in Pitch Black, showing him as merely another good-looking pretty boy smirking his way through macho action man poses. Twohy puts Diesel back in place with the same sense of lethally contained danger that he had the first time around. Although there is not the same breathtakingly original ambiguity the character had first time out – Riddick is in a much more heroic role this time – but Diesel certainly puts some credibility back into his screen presence.

Most critics were dismissive about The Chronicles of Riddick but one feels that this is unfair to it. It is not quite the equal of Pitch Black but David Twohy still gives us an exciting and intelligent science-fiction/action film. There is certainly a great deal of originality and imagination to it – I would far prefer to watch further chronicles of Riddick than any of George Lucas’s bland second Star Wars trilogy.