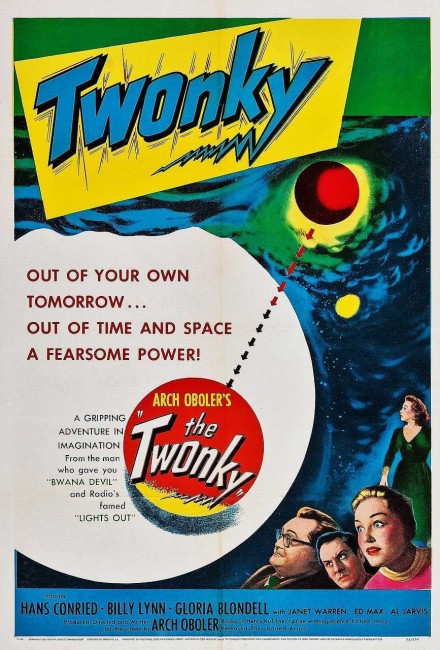 Philosophy professor Kerry West’s wife Carolyn goes to visit her sister for the weekend. She has brought him a television set to keep him company while she is away. As West relaxes, the tv set comes to life, moving about and lighting cigarettes for him, doing the dishes and insistently changing the record he puts on. West brings in his friend, football Coach Trout, who calls the tv set a Twonky, the name for something you don’t understand. West becomes increasingly driven to frustration by the Twonky’s actions, which include blanking his mind of the lecture he has to give and knocking out the people from the appliance shop and members of the football team as they try to remove or dismantle the tv. Trout believes it has shapechanging robot that has come back from a totalitarian future where it is was designed as a domestic aid that also controls the owner’s behaviour. As a desperate West tries to be rid of the Twonky, it foils his every attempt.

Arch Oboler (1909-87) gained a significant name for his work on radio, beginning as producer/writer/principal creative force on the famous horror anthology series Lights Out (1934-57). From the name he made there, Oboler began to expand out onto film, beginning with the script for the thriller Escape (1940). He made his directorial debut with Strange Holiday (1945) wherein a man returns from a holiday to find the US overtaken by fascists. Oboler made a total of seven films as director, most of which fall into genre territory. These include the split personality film Bewitched (1945); Five (1951), the very first depiction of nuclear war and its aftermath on the screen; and the alien invasion film The Bubble (1966). Perhaps the most influential of Oboler’s films in retrospect was the non-genre hit of the African adventure Bwana Devil (1952), which was the very first feature film made in 3D.

Oboler based the film here on the short story The Twonky (1942) by Lewis Padgett. Lewis Padgett was the pseudonym used by the husband and wife writing team of Henry Kuttner and C.L. Moore (although oddly the ‘based on’ credit on the film attributes the author of the story as Kuttner only). The two were celebrated writers in the science-fiction pulp magazines of the era, where Kuttner in particular became adept in humorous science-fiction, especially the hilarious Professor Gallagher stories collected in Robots Have No Tails (1952). Via their various pseudonyms, Kuttner and Moore have also inspired the stories for the films Timescape (1992) and The Last Mimzy (2007).

I have not been able to track down a copy of the original Kuttner/Moore story for comparison. In the story, The Twonky is a radio set. In the film version however, The Twonky becomes a tv set and Arch Oboler has swung the premise around to become a satire on television, which was very much a newly arrived medium in 1953, having only begun commercially in the US in 1947 and spreading to most of the country by 1949. For several years, tv stole audiences away from cinemas and in particular radio. These were both grounds that Arch Oboler had made his own so the opportunity to dig a knife in may well have been one that he relished.

The Twonky was a flop when it came out. Nobody then or since has anything good to say about it. Contrarily, I kind of liked it. The Twonky is an appealing creation – an ambulatory tv set that scuttles about like a crab, changing Hans Conreid’s records, doing his dishes, lighting his cigarettes, zapping anybody who threatens it. The effects would have been fairly clever for the day and still look reasonable.

Hans Conreid – a former member of Orson Welles’ Mercury Theater troupe who had a busy year in 1953 where he also voiced Captain Hook in Disney’s Peter Pan (1953) and played the villainous title role in The 5000 Fingers of Dr T (1953) – is an able comic foil. The film gets good mileage out of simply winding such a milquetoast individual up and turning every aspect of his existence against him. It all achieves a madcap enjoyability.

The concept is a fairly throwaway one but I was surprised how much Arch Oboler makes good science-fiction out of it – employing a rationale involving a robot time travelled back from a totalitarian future where it is used for domestic control and that it is a shapechanger that has adapted to the surroundings by taking on the form of a tv set. The only real credibility issue is that the script never logically establishes how football coach Billy Lynn would know anything about the world it came from (any such questions are dismissed in a line where he tells Hans Conreid he would know if he read science-fiction).