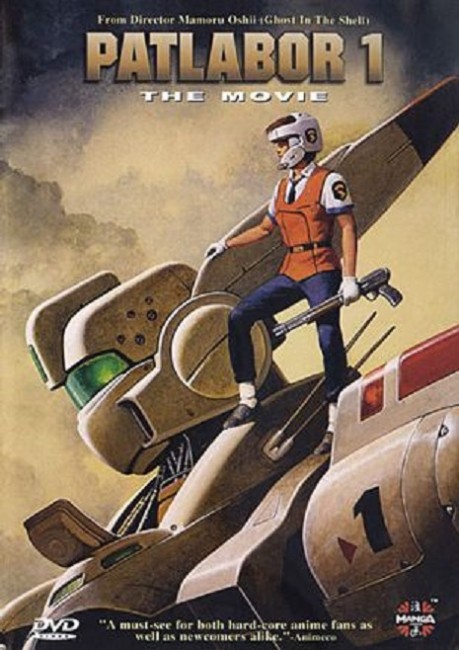 Police officers Asuma Shinohara and Izumi Noah investigate as several Labors, giant manned robots built to work on the Babylon Project, a massive landfill construction in Tokyo Harbour, go amok and rampage through the city. They realise that all the rampaging Labors have been installed with the new Hyper Operating System from Shinohara Industries. They discover that the HOS designer Eiichi Hoba committed suicide one month beforehand and has set things up so that the wind inside the building site will trigger a sonic resonance and cause the Labors to go amok. They race to stop the culmination to Hoba’s plan, which involves using the massive shell of the Babylon Project as a tuning fork that will send every Labor across the country amok at once.

The Patlabor saga originally began as Patlabor (1989), a seven-episode animated series made directly for video, set around the activities of a police amok-robot squad. It was then made into this film and at the same time was spun out as a tv series that lasted for 48 episodes. The film version comes from director Mamoru Oshii, who had directed all the episodes of the original video series, and a few years later made a big breakthrough with the cyberpunk anime Ghost in the Shell (1995). (See below for Mamoru Oshii’s other films).

Peculiarly for a director working in anime, Mamoru Oshii is someone who prefers plot to action. After two good action sequences at the start – scenes of armed forces taking on a tank in the forest that play over the credits but are related to nothing else in the film; and a scene where a rampaging construction Labor is brought down – Patlabor: The Mobile Police bogs down in a very talky plot.

This would be all very well but, characteristic also of Mamoru Oshii, the plot is not exactly clear what is going on. The scientist’s scheme to destroy Japan – by using a typhoon to vibrate through the shell of a partly constructed building and set up a resonant vibration that will be carried across the country and cause all Labors to rampage – seems particularly hare-brained.

Mamoru Oshii does at least manage get it all together for a rousing action climax destroying the Ark and with the hero fighting around the outside of a rampaging Labor. There are other moments where one can detect the Oshii influence – some of the peculiarly melancholic moments of character introspection. As with almost all anime, the hero and heroine appear to be in their mid-teens and are played with an exaggerated childishness.

Mamoru Oshii returned to make a sequel Patlabor: The Movie 2/Patlabor: The Mobile Police 2 (1993), which some regard as superior to the original. Oshii was not however involved in the third film Patlabor WXIII (2002) but did return for the twenty-fifth anniversary of this film to direct The Next Generation: Patlabor (2014).

Mamoru Oshii has become a major name in Japanese animation. Oshii began working as a director in various anime tv series before becoming a feature director with the children’s fantasies Urusei Yatsura: Only You (1983) and Urusei Yatsura 2: Beautiful Dreamer (1983), both adapted from a tv series he had worked on, the science-fiction film Dallos (1983) and the surreal fantasy film Angel’s Egg (1985). He then had a big breakthrough with Ghost in the Shell (1995). In between this, he moved into live-action with the SF action Red Spectacles (1987) and its follow-up Stray Dogs (1991), and the non-genre Talking Head (1992). In live-action, he also made the stunning Virtual Reality film Avalon (2001), which later produced a sequel with Assault Girls (2009),. He returned to anime for Ghost in the Shell: Innocence (2004), The Sky Crawlers (2008), an episode of the anime anthology Halo Legends (2010) and the live-action clone wars film Garm Wars: The Last Druid (2014). Oshii has also written the anime Jin-Roh: The Wolf Brigade (1998) about a werewolf anti-terrorist squad operating in an alternate world post-War Japan, and produced the impressive short animated film Blood: The Last Vampire (2000) about a vampire government agent engaged in a war with demons.