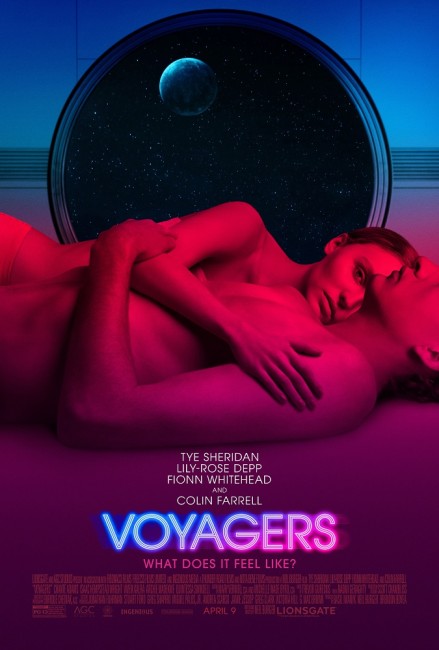 The year 2086. A ship is launched to colonise a nearby habitable planet. The journey will last 86 years. Because of the duration, a special breed of children have been raised for living in space who are not used to planetary confines. Their descendants will be the ones who land on the planet. Richard, the director of the program, elects to join them on board to oversee. Ten years after the launch where the children are now in their teens. Christopher and Zac make the discovery that an additive is placed in the blue drinking liquid that tranquilises their impulses and they decide to stop taking it. Richard is forced to go outside the ship on a repair mission only to be attacked by something and killed. In the aftermath, Zac makes claims that Richard was killed by an alien. Christopher is elected the new commander of the mission by popular vote. He then has to deal with the rest of the children neglecting their duties and giving into impulses after going off the blue liquid. Zac openly defies Christopher and stirs up rebellion, claiming he is the rightful commander. Those loyal to Christopher find themselves at war with the mob stirred up by Zac, driven by fear of the alien.

The generation ship comes from the idea that space travel to the nearest habitable body takes a realllly long time and that short of the invention of faster-than-light travel the only feasible way to get there is by crewing a ship with people who will live and die on board and it will be their descendants who arrive at the destination. The generation ship has a long history in science-fiction, beginning on the printed page with books like Robert Heinlein’s Orphans of the Sky (1951), Brian Aldiss’s Non-Stop (1958), Alexei Panshin’s Rite of Passage (1968) and Harry Harrison’s Captive Universe (1969).

There have been occasional attempts to bring the idea of a generation ship to screen with the tv series Starlost (1973) and the odd episode of series like Doctor Who’s The Ark (1966), the Star Trek episode For the World is Hollow and I Have Touched the Sky (1968), Space: 1999’s Mission of the Darians (1975) and The Orville’s If the Stars Should Appear (2017) and a couple of films with the incredibly bad Space Mutiny (1988) and the better Pandorum (2009). Voyagers is another of these films, although while most generation ship stories take place centuries after their launch and feature descendants of the crew who have forgotten their purpose, this features things going sideways not long after launch.

Voyagers is written and directed Neil Burger who first appeared with the acclaimed The Illusionist (2006) with Edward Norton as a stage magician who may have real powers. Burger next went onto make the non-genre likes of The Lucky Ones (2008) and The Upside (2017) and returned to genre material with Limitless (2011) in which Bradley Cooper finds a drug that provides expanded mental powers, and Divergent (2014), the first film in the Young Adult dystopian series.

I didn’t high expectation of Voyagers for the simple reason that nothing that Neil Burger has done has stood in any way out from being strictly middle of the road. The set-up seemed to have some interesting possibilities – of the children on the ship discovering that they have been drugged as a way of damping their natural impulses and undergoing an awakening after going off their meds, which seemed like it was heading in the direction of George Lucas’s first film THX 1138 (1971). Also the design of the ship, which is all narrowly constricted corridors that hardly seem enough room for two people to walk abreast, seemed something uniquely different.

That said, Neil Burger seems to lack any real interest in this idea of a group of kids who have been narcotised their entire lives suddenly awakening to their impulses – he shows a handful of scenes of them having sex everywhere or of guys getting jealous and into fights but never seems particularly invested in these scenes. The biggest takeaway from this would seem to be that when you stop narcotising people then guys will suddenly grab the women without consent, go into jealous rages and get all malevolent and calculating. (The film never seems to depict how going off the meds affects the girls).

There comes a sudden point where you realise that Voyagers has really been conceived as Lord of the Flies in space. Lord of the Flies (1954) was a novel by William Golding about a class of British schoolboys who were abandoned on a desert island after a plane crash where they rapidly abandon civilisation and descend into barbarism. This was twice filmed as Peter Brook’s starkly effective Lord of the Flies (1963) and far less successfully as the US made Lord of the Flies (1990), which substituted a group of boys from an American military academy. In recent years, I have seen the idea tossed around as a potential all-girl version.

Neil Burger’s copyings from Lord of the Flies are blatant, right down to simply changing the name of the leader of the breakaway group from Jack to Zac. Golding had Jack drumming up fear and superstition among his followers by referring a monster, while this has Zac drumming up fear and superstition by belief in an alien. About the only major difference, aside from the substitution of an island for a spaceship, is that Burger has the classroom of boys replaced by a mixed gender complement. He also ups the age of the group to their teens whereas in all the versions of Lord of the Flies the group was boys just around the age of or before puberty.

Neil Burger is a director whose work remains frustratingly middle-of-the-road. He plays to easy emotional and dramatic cues – case in point here being that rather than entrust in his actors to convey the sense of coming off their meds, he uses lazy shortcuts such as cutting to montages of animals in the wild, buildings collapsing, rave dancers, bodies together in closeup and soldiers in action. I don’t think Neil Burger does anything other than tap the superficial surface of the story. For a more stark and effective treatment, I would highly recommend going back and watching the Peter Brook film.