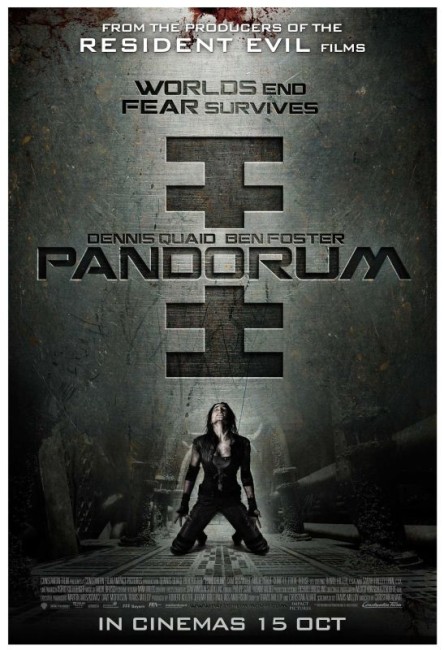 In the year 2174, a new Earth-like planet Tanis has been discovered. With Earth overcrowded, the spaceship Elysium is launched on a mission to transport colonists frozen in cryogenic suspension to a new life on Tanis. Corporal Bower and Lieutenant Payton are abruptly woken out of cryogenic suspension in mid-mission, although doing so leaves their memories confused. They realise that the power has gone out all over the ship. Bower sets out on a mission to restart the reactor. However, as he ventures through the corridors, Bower realises that others are aboard, including crew members who have reverted to savagery and are being hunted by creatures that are possibly alien or maybe mutated by a biological accelerator that would have allowed them to live on Tanis. Bower and Payton attempt to get to the bottom of what has happened to the mission – only to realise that either they or the survivors may be infected with Pandorum, a mental condition where trauma is amplified by emergence from cryo-sleep, creating paranoia and hallucinations.

I must admit to being a sucker for stories about big mysterious spaceships and/or space habitats. Science-fiction literature overflows with these – works like Greg Bear’s Eon (1985), John Varley’s sublime Gaea trilogy and of course the Arthur C. Clarke classic Rendezvous With Rama (1975). There is also the genre of generation ship stories – stories about ships without Faster-Than-Light drives where the long journey through space is taken up by multiple generations of crew with the stories usually featuring a culture that has fallen into decline and forgotten its purpose – see works such as Robert Heinlein’s Orphans of the Sky (1951), Brian Aldiss’s Non-Stop (1958), Alexei Panshin’s Rite of Passage (1968) and Harry Harrison’s Captive Universe (1969).

On screen, there has been the interstellar terror genre perpetuated by Alien (1979) and its ilk with crew discovering/being hunted through big mysterious ships but not many of these have done anything with the genre in terms of atmosphere or original ideas – the neglected Nightflyers (1987), maybe some parts of The Black Hole (1979), but mostly routine efforts like Pandorum producer Paul W.S. Anderson’s Event Horizon (1997), Alien Cargo (1999) and Supernova (2000), as well as a host of cheap Alien clones.

The generation ship idea has been sporadically conducted with the likes of the incredibly bad Space Mutiny (1988), the tv series Starlost (1973) and the odd episode of series like Doctor Who‘s The Ark (1966) and The Ark in Space (1974), the Star Trek episode For the World is Hollow and I Have Touched the Sky (1968), Space: 1999‘s Mission of the Darians (1975) and The Orville‘s If the Stars Should Appear (2017), but nothing substantial. There was the subsequent tv mini-series Ascension (2014), although technically that was not even set aboard a spaceship at all. Apart from Star Trek – The Motion Picture (1979) and David Fincher’s perpetually stalled film version of Rendezvous With Rama, nobody has yet conducted a big cosmic mystery ship film.

Pandorum comes from German director Christian Alvart who attained a reasonable degree of international acclaim with his second work, the serial killer film Antibodies (2005). The same year as Pandorum, Christian Alvart made his English-language debut with the modestly effective evil child film Case 39 (2009), which remained caught up in distribution limbo in the US for over a year and then opened to dismal reviews. Alvart returned to filming in Germany and later made German-language serial killer thriller Cut Off (2018). Pandorum is also produced by Paul W.S. Anderson, a regular genre director with the likes of Mortal Kombat (1995), Event Horizon (1997), Soldier (1998), Resident Evil (2002), AVP: Alien vs. Predator (2004), Death Race (2008), Resident Evil: Afterlife (2010), Resident Evil: Retribution (2012) and Resident Evil: The Final Chapter (2016).

As it opens, Pandorum suggests it is drawing from the book of Alien cliches – the crew woken from cryo-sleep to find that something has gone wrong; the discovery that viciously predatory creatures are lurking in the shadows of the ship’s corridors. That said, the script starts to place some interesting spins on this idea. The crew members wake out of cryo-sleep with their memories blank, which starts to suggest an outer space puzzle drama along the lines of Unknown (2006) – although disappointingly, this aspect is forgotten about fairly quickly. As we venture into the depths of the ship, we encounter survivors living at a level of barbarism, where the film starts to suggest it is going to be a generation ship story about the crew having regressed and forgotten their mission. Behind all of this is the suggestion of the title condition of Pandorum, which is something to do with emotional traumas being amplified by cryo-sleep causing the recipient to become totally bug-eyed. The film stirs an interesting conceptual pot that leaves one with the hope that Pandorum is going to be better than the standard Alien copy.

Christian Alvart piles on a great deal of atmosphere. The film almost entirely consists of long dark corridors with lighting level reduced to no more than handheld torches or glow sticks and with things ominously lurking. There is a densely paranoid soundscape that fills the background of the film with a constant thrumming that sounds like the vibration of industrial machinery. Suddenly, everything will burst into a frenzy of attack by the survivors or the creatures. Here, like any decent Alien clone, Christian Alvart keeps glimpses of the creatures brief and subliminal.

All of this works with a reasonable degree of effect. The main problem throughout the first half of the film is a desire to work out what is going on. There is a good deal of urgency generated around the need to travel through the corridors with people constantly saying lines like “Can you hear me corporal?” However, for much of the time we remain in a state of confusion not always what is going on and why.

The story certainly produces some modestly effective surprises out of the bag towards the end of the show and arrives at a resolution that works reasonably well. The use of science-fiction tropes proves to be intelligent rather than stupid or cliched. There is the odd aspect that does not work. The mutant creatures are not well explained – it seems more like they are there because this kind of film is one that mandates that big, dark spaceships filled with corridors be taken over by some type of scaly, slimy alien-type menace.

[PLOT SPOILERS] The other piece that does not work is the revelation that one of the characters is suffering from Pandorum and that the other character they have been conversing with through much of the film is an hallucination inside their mind. This is semi-effective but suffers too much from the cliches that took over after the success of The Sixth Sense (1999) in which our reversals of assumption about people and who/what they are is turned on its head.

It is good to have Dennis Quaid back up on the screen, even if he never gets to do much. Pandorum is also welcome for giving the underrated Ben Foster a turn as the hero after Foster has become typecast in psychopathic bad guy roles in the likes of Six Feet Under (2001-6), Hostage (2005), Alpha Dog (2006) and 3:10 to Yuma (2007).