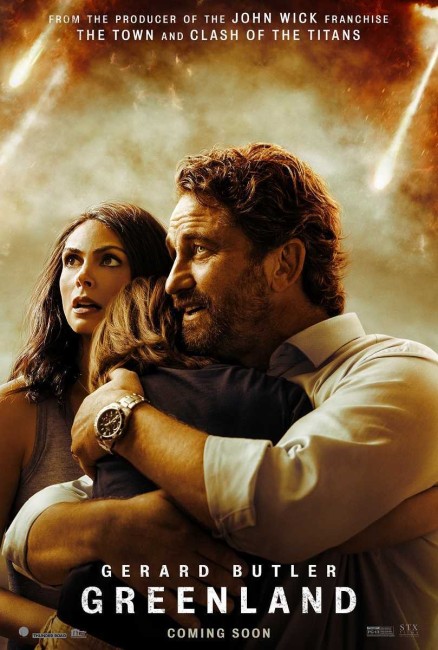 In Atlanta, structural engineer John Garrity and his wife Allison prepare to host a barbecue. Everyone has come to watch on tv as a fragment of the approaching comet Clarke is about to strike in the ocean. John and Allison then receive messages from the government informing them they have been selected to go into a shelter and to report to Robins Air Force Base. As they watch on tv, the comet fragment hits Tampa instead of the ocean. John, Allison and their seven-year-old son Nathan head to the Air Force Base as the city around them descends into chaos. They go to board the flight to the government survival shelters in Greenland only to realise that Nathan has left his insulin in the vehicle. As John returns to get it, Allison is told they cannot board because Nathan has a medical condition. Separated, Allison sets out to her father’s place in Lexington and John follows. However, this proves a perilous journey as Nathan is abducted and John has to fight off others wanting their bracelets to get aboard the last flight to the survival shelters. It becomes a race against time before a large chunk of the comet strikes Europe in a matter of hours, bringing about an extinction level event.

Greenland was released in August and September of 2020, going to streaming in December. For most of the world, this was at the very height of the Corona Virus pandemic. Sitting back to watch what is in effect a standard pre-pandemic disaster movie in 2021, there seems something oddly redundant about it. The plot about the world facing vast catastrophic mass destruction and the personal dramas of a family to be reunited amid the splintering social chaos wash over one and feel like empty pieces of melodrama. You yourself have undergone months of lockdown isolation, struggled to stay financially afloat, people have not socialised or seen family members for months, you live in fear of unmasked human contact with other human beings, even seeing an unmasked person has become a rarity. These events have just as catastrophically shaken the world to its core but none of it seems to have the slightest thing in common with anything happening on screen in the film.

There is nothing in Greenland that does not play by large cliche story arcs – the impending disaster; the family struggling to get to safety who end up being separated in the chaos and the fight to be reunited; the rioting and looters; the desperate race to get to the last flight(s) out and so on. The disappointment of the film is that very rarely does it ever opt for Roland Emmerich-sized depictions of mass destruction. This is one of the few reasons that people sit through the cardboard drama in these films but all Greenland offers are a few impacts and explosions but nothing memorable.

Someone most versed in Earth sciences than I am can probably give a far more accurate depiction of how realistic the depiction of the impact of cometary debris on the Earth would be. The National Geographic has a fine article on what would have happened at the time of the Chixlucub meteor impact that wiped out the dinosaurs with Here’s What Happened the Day the Dinosaurs Died. The comet here is actually a much larger impactor than Chixlucub was but would have had fairly similar results. Basically Gerard Butler should have been wiped out rather than merely feeling the shockwave from the Tampa impact. The bit that got me was seeing the group crash in Greenland moments after the impact in Europe, several thousand miles away, and yet there is already ash in the air (something that comes from burning debris thrown up into the atmosphere by the explosion) before the shockwave from the explosion itself is felt.

Director Ric Roman Waugh had worked in the industry as a stunt person since the 1980s. He had directed a string of action films with the likes of Exit (1996), In the Shadows (2001), Felon (2008), Snitch (2013), Shot Caller (2017) and the previous Gerard Butler vehicle Angel Has Fallen (2019), all non-genre works. The script comes from Chris Sparling who has worked as a screenwriter with the conceptual containment thrillers Buried (2010) and ATM (2012), as well as Gus Van Sant’s The Sea of Trees (2015) and the Young Adult horror Down a Dark Hall (2018). Sparling made his directorial debut with An Uzi at the Alamo (2005) went on to direct-write the fascinating Found Footage film The Atticus Institute (2015) and the home invasion thriller Mercy (2016).