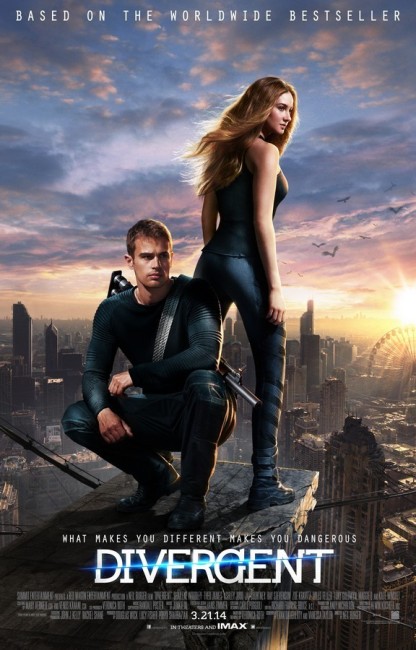 Chicago of the future where society is divided into five factions – Abnegation, those who act with compassion and selflessness and rule the government; Amity, the peacemakers; Candor, those who are always truthful; Erudite, the intellectual class; and Dauntless who have no fear and act as the city’s security forces. Teenager Beatrice Prior has grown up in an Abnegation family. It is nearing her and her brother’s Choosing Day where they are to select what category they will follow for life. However, when Beatrice undergoes the test that will determine which category she belongs too, the instructor panics because Beatrice’s results prove to be off the scale, meaning that she is the rare case of a Divergent who belongs to all categories. She is urged to hide this and tell nobody. At the choosing ceremony, Beatrice makes the decision to join Dauntless and immediately is plunged into the faction’s world of training and combat. Under the tough leader Eric, they are told that if they do not meet a red line on the scoreboard, they will be dropped and forced to become factionless. As Beatrice, or Tris as she chooses to now be called, struggles to make it under the tough training regime, there is social unrest as Erudite seeks to overthrow Abnegation’s rule. Amid this, the city’s leader Jeanine Mathews conducts a tough crackdown that will root out all Divergents, who are perceived as rebels.

The 2000s has given birth to the phenomenon of the Young Adult film. The trend started with the Harry Potter films and went stratospheric with the success of the Twilight series. Both of these led to a publishing industry revolution where books started to be sold as multiple volume series for teen readers. Filmmakers quickly latched onto these as adaptable properties. Each of these hits have caused the publishing industry to go through trends – stories about young wizards, then vampire romances. With the success of The Hunger Games (2012), the Young Adult film then turned to the dystopian future as in Divergent, The Giver (2014) and the subsequent The Maze Runner (2014).

Divergent is adapted from the first book of the trilogy of Young Adult novels, which consist of Divergent (2011), Insurgent (2012) and Allegiant (2013), by Veronica Roth who began publishing while she was still at university. Roth has fairly much stolen the premise of Divergent from Aldous Huxley’s Brave New World (1932). Huxley imagined a future where society was divided into five factions that were bred for different roles in society. The basic premise of the society stratified by designated factions was also used in the far superior City of Ember (2008) also based on a Young Adult series of books – this alas came along a little too soon to be part of the Young Adult film fad and never managed to get beyond a single work.

Under director Neil Burger, who previously made Interview with the Assassin (2002), The Illusionist (2006), The Lucky Ones (2008) and Limitless (2011) and the subsequent The Upside (2017), Divergent seemed to hit all the right buttons and has proven one among the Young Adult film contenders that has succeeded at the box-office after a string of others that have failed to do so – Beautiful Creatures (2013), The Mortal Instruments: City of Bones (2013), The Adventurer: The Curse of the Midas Box (2014), Vampire Academy (2014) and the like. The film may have been a success but it failed to move me in any way. It falls apart almost as soon as one starts to think about its fundamental premise.

Think about this. The people in the society that Veronica Roth has created have been grouped into five categories divided up by qualities such as intellect, peacefulness, truth-telling, compassion and fearlessness. I kept wanting to ask why a society would stratify itself in this way – this is a future that seems to exist in a vacuum without any kind of plausible socio-historical context. However, the story’s problems are deeper than that. The story seems to suggest that the five categories are innate ones (the tests, for instance, are able to tell which category one belongs to by the administration of a drug); at other points, they are contradictorily seen as qualities that the initiates have to be trained in.

To me, this is something that is fundamentally incompatible with human psychology. For example, I don’t understand why compassion and peacefulness cannot be congruous with truth-telling or intellect? In any normal behavioural outlook, surely peacefulness and compassion would be qualities that would be strongly intertwined. It is akin to trying to divide human behaviour into arbitrary behavioural characteristics such as astrological signs. People are more complex than that – qualities of personality are not innate ie. things we are born with, they grow from life experiences, family backgrounds and the cultures that we are raised in. Moreover, everyone is a mixture of these qualities. I would have brought the premise of Divergent far more so if it was more like a test where a person was gradated on a scale – you rank 9 as Dauntless, a 6 as Candor but only a 3 as Abnegation so you are more suited to join the ranks of x, rather than it having to be one or either category.

At other points, we have scenes where Shailene Woodley goes into drug-induced dream states to confront her fears where the manner in which she chooses aspects of the traps she faces indicates whether she belongs to one of the categories. Again, this seems to run entirely contrary to human psychology. There are an enormous number of variable responses in any given situation, especially when one is in a heightened state like fear – to say whether one chooses to break a glass window or plug a pipe as being indicative of your true personality as honest, peaceful or fearless is absurd. It reminds of one of those so-called personality tests – “you see a lake before you – describe how big it is, whether it is calm or tempestuous. This represents the type of inner life you have.” It doesn’t mean that at all, it means nothing more than what the test-giver has ascribed the imagery as meaning. (As to the imagery itself, how does one know it is a symbol of the unconscious as opposed to say the person visualising the lake where they spent their summer vacation?) This is also the problem with Freudian dream analysis where Freud seemed certain that all dream images were innate symbols that had definitive meanings; this is poppycock – the only meaning that objects in dreams have is their importance to the dreamer.

As this contrived scenario played out, I felt like I could not connect to anything going on in Divergent. The film seems composed of arbitrary situations – once one joins a faction they have to abandon their family if they are of a different faction, but why (other than that is serves the plot)? New rules are created that if applicants fail to meet certain standards of training they are dropped out of Dauntless but why (other than that it suits the plot to have its heroine fighting for her survival)? For entirely arbitrary reason, Kate Winslet’s leader makes the decision to give the Dauntless soldiers a serum that turns them into zombies but why (other than that it gives the story a big dramatic finale where Tris has to face her love turned into a mindless killer)? There is in-fighting and eventually a revolution among the factions but we never learn what issues the two sides regard of such importance that they are prepared to go to war (other than that the social turmoil suits the plot).

All of the dramas the film contrives cease to seem interesting when the fundamental premise fails to engage. If you are unable to believe what is happening, why do any of the pieces of drama that the film brings together matter? If nothing else, at least these Young Adult dystopian works seem to have inherently subversive messages where they equate their Coming of Age tales with defiance of the social order. In the case of The Hunger Games: Catching Fire (2013), it even went so far as to hold a coded message for Marxist revolution. If there is any message that Divergent holds, it is a defiance of standardised testing in the education system. Although compared to say the aforementioned Brave New World or the searing brilliance of George Orwell’s Nineteen Eighty-Four (1949), this does seem rather tame and banal as dystopian scenarios go.

All present, with the exception of Neil Burger, returned with Insurgent (2015) and Allegiant (2016) under director Robert Schwentke. The final chapter was announced as Ascendant but interest in this has fallen off after disappointing box-office returns on the third film.