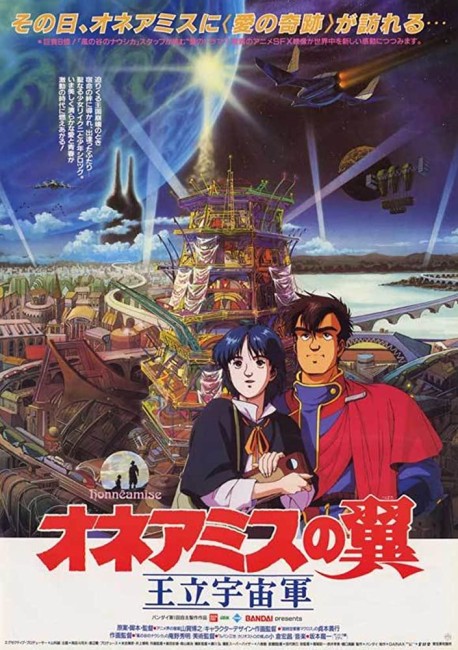 Rejected as an applicant by the Navy, Shirosugh Lhadatt enters the Royal Space Force. However, nobody has any interest in spaceflight and those who have heard of the Space Force regard it as a joke. Shiro soon becomes indifferent to duty. On R&R, he picks up a religious pamphlet being handed out in the street by Riquinni Nonderaiko and then becomes involved with her. Riquinni is fascinated by the idea of spaceflight and gives Shiro newfound inspiration. He is the first to volunteer to be an astronaut as the Space Force plans to launch a rocket into space. However, as news of the rocket launch is announced to the nation, peace protestors attempt to sabotage it and Shiro becomes the target of foreign assassins.

The Wings of Honneamise is an exceptional work of anime that only came to light in the West about a decade after it was originally released in Japan – and even then was not widely seen.

It is made with a great beauty. This is none more evident than in the opening scene with images of jets taking off, leaving huge contrails across the sky, which is contrasted against the watching Shiro and the voiceover narration where he tells how he wanted to be in the Navy but ended up joining the Space Force instead. The epical suggestion of destiny about to be born contrasts beautifully with a tone of embittered disappointment.

Other scenes such as the training flight contain such an exhilarating rush that one almost forgets they are animated and joins in the sense of being right there. Equally good are the incredibly realistic scenes of war and the beautiful image of the rocket rising up over the battlefield in the midst of the fighting. The action scenes with the assassin pursuing Shiro through the slums and later in a madcap race through the streets in a street cleaner are also immensely exciting.

The film’s alternate world is very nicely designed with a handcrafted quality that is at once both familiar and alien – lovely little background touches like the trams and flying omnibuses, the airships and coal-powered hovercraft, or the street scenes with women floating in giant fish bowls.

For all its moments of great beauty, The Wings of Honneamise is an oddly slow-paced film. The reasons for this are because its purpose is not the same as the usual ones of most science-fiction anime. It is about the same as comparing Star Wars (1977) and 2001: A Space Odyssey (1968) – one is entertainment; the other what could almost be called religious science-fiction. The Wings of Honnemaise clearly belongs to the latter, rather than something that can be thrown in along with epic mass destruction showcase of contemporaries like Akira (1988).

As such, the film is a peculiar blend of space launch movie a la Countdown (1967), alternate world politics, social liberalism and religion. This is an ambitious blend that makes for an oddly akilter story at times. For example, the story sets up a romance between Shiro and Riquinni but the most this ever amounts to is a failed rape attempt. For all the heroine’s ability to teach the hero social responsibility and religion, she is also seen as someone who fails to stand up and take responsibility for her own life.

The actual journey into space that climaxes the film makes for an intriguingly transcendent ending. Here the film becomes openly preachy and makes a plea for space as a place where one can live beyond frontiers and barriers. Although, as the film’s fadeout with Riquinni still on a street corner handing out pamphlets and being ignored shows, the film is not terribly hopeful about this. The spaceflight also conducts a montage of human history, which is akin to the 2001 bone-to-spaceship cut, although one that shows all the steps in between, which tends to hammer the point home a little obviously. Ryuichi Sakamoto also turns in a nicely lyrical score.