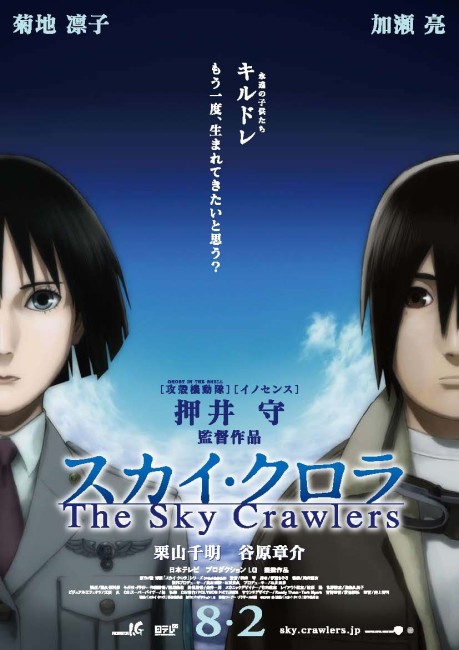 Yuichi Kannami flies in to the Rostock airbase to take up a position as a fighter pilot in the ongoing war against the rival Lautern Corporation. He and the other fliers are Kildern who have been genetically engineered to remain as children no matter how old they grow. In between aerial dogfights and the boredom of down time, Kannami becomes attracted to his female Kildern commanding officer Suito Kusanagi. She draws his attention to the fact that the world they live in is one where the war is kept artificially going between the corporations to cater to warlike instinct in a world that has made peace. Kannami also learns how each of the Kildern is replaced by a clone after they are killed. Kannami realises that the futility of this situation has brought Kusanagi to despair, causing her to kill his clone predecessor Jinrou.

The Sky Crawlers comes from Mamoru Oshii. As an anime director, Mamoru Oshii has become one of the most interesting names in contemporary Japanese fantasy cinema. Initially emerging as a director on various animated tv series, Oshii first appeared on cinema screens with the children’s fantasies Urusei Yatsura: Only You (1983) and Urusei Yatsura 2: Beautiful Dreamer (1983), both adapted from a tv series he had worked on, the science-fiction film Dallos (1983), the surreal fantasy filmAngel’s Egg (1985)., and Patlabor: The Mobile Police (1989). In between this, he moved into live-action with the SF action Red Spectacles (1987) and its follow-up Stray Dogs (1991), and the non-genre Talking Head (1992). He then wowed audiences worldwide with the Cyberpunk anime Ghost in the Shell (1995). Subsequently, Oshii went onto make the amazing Ghost in the Shell 2: Innocence (2004) and an episode of Halo Legends (2010) and ventured into live-action for the stunning live-action Avalon (2001), its semi-sequel Assault Girls (2009) and the clone wars film Garm Wars: The Last Druid (2014). Oshii has also scripted Jin-Roh: The Wolf Brigade (1998) and produced Blood: The Last Vampire (2000).

The quality of animation that has gone into The Sky Crawlers is stunning. There is an exquisite degree of detail to the film – you can almost reach out and feel the rivets and texture of the metal on the planes, the wood panelling of the houses, the brickwork of the control tower, or see the detail in the ornamental plates on the mantle, the way the streetcar sparks as it heads off into the night. The scenes of the planes in flight and in combat – the detail of the ground below, the raindrops impacting against the cockpit and so on – is dazzling.

The film’s opening aerial combat sequence is spectacular in its photorealistic detail, while Mamoru Oshii gets everything together for a stunning mass combat sequence three-quarters of the way through with squadrons of fighters up against gigantic flying wing bombers. Oshii’s mechanical designers have devised a fascinating almost-familiar set of machines for this world – the pilots all operate in planes that have rear-mounted propellers (apparently a variant on a design that was built in real-world Japan during World War II – the Kyushu J7W1 Shinden).

The Sky Crawlers often resembles the films of Hayao Miyazaki – in particular works such as Nausicaa and the Valley of the Wind/Warriors of the Wind (1984), Laputa: Castle in the Sky (1986), Kiki’s Delivery Service (1989) and Porco Rosso (1992) – which centre around flying adventures and peculiar forms of aircraft and usually feature child protagonists. More so than previously, Mamoru Oshii draws his characters in the ligne claire style used extensively by Miyazaki.

Like Miyazaki, Oshii balances scenes of breathtaking action with contemplative quietude. Scenes like the dazzling opening dogfight segue into depicting the slow laziness of life at the airstrip – the basset hound dozing on a couch, the character of Yudagawa slowly and methodically folding the corners of a newspapers he has just read, the detail and dullness of the bunk room that Kannami enters. The characters in The Sky Crawlers all seem to move with more of a slowness than is common for animated characters.

The Sky Crawlers also appears to be taking place in an alternate world. From the outset this is not always apparent – what we are watching could easily be taken from a WWI or WWII flyer adventure such as Wings (1927) or Biggles (1986) – there is an undeniable resemblance to what was attempted in Sky Captain and the World of Tomorrow (2004), although Mamoru Oshii is not so interested in creating a work of retro science-fiction. In terms of story, imagine a work that sits somewhere between Sky Captain, Orson Scott Card’s child warrior novel Ender’s Game (1985) and a film like Never Let Me Go (2010).

Certainly, this is never an alternate world in the sense that most science-fiction writers use it – where the world we see diverges from the one we are familiar with at a certain historic point. Rather Oshii seems to have borrowed a few ideas from Hayao Miyazaki’s alternate worlds where he integrates his fantasy and science-fiction elements into borrowings from terrestrial cultures. The world holds many familiar aspects to our own – advertisements for Pepsi, Kusanagi driving a Porsche – yet there are many other aspects such as genetically engineered clone children or war staged between corporations that clearly do not. These alternate worlds are something that have taken off in Japanese fantastic cinema – many of Hayao Miyazaki’s works and both Jin-Roh and Blood: The Last Vampire were set in similar highly detailed almost but not quite familiar alternate worlds.

The complaint about The Sky Crawlers might be that it is often slow moving and the story takes place more inside the slow observations and detail of life on the airstrip than it does in big dramatic developments or the action taking place in the sky. The film keeps alluding to aspects of the world it is taking place in – an ongoing war between two corporations that we later gather appears to be staged to fill some emotional need in a world that has made peace, characters who have been genetically engineered so that they never grow up and, as it transpires later in the story, are being cloned for their skills and replaced when they are killed.

None of this is ever clearly spelt out and it is often up to us to guess how these aspects fit together. It shows that Mamoru Oshii is making a film that in terms of its emotions and story complexity is pitched to adults rather than youth audiences – it is hard to believe that casual child audiences would have the patience for the slowness of the film or be able to read between the subtleties of storytelling to grasp what is going on.

The film reaches an incredibly saddening ending [PLOT SPOILERS] where the fighters go up for another battle, the others wait back at the airstrip but nobody comes back and they eventually turn and go away with the last image being that of the basset hound left alone before it too turns and snuffles away leaving an empty field. What an incredibly subtle and emotionally effective end to a film like this. Of course, if you stay all the way through the end credits, there is a scene where a new plane arrives at the field and the pilot exits and goes in to Kusanagi’s office to report to duty. We never see their face but the clear implication left is that this is the clone replacement of Kannami.