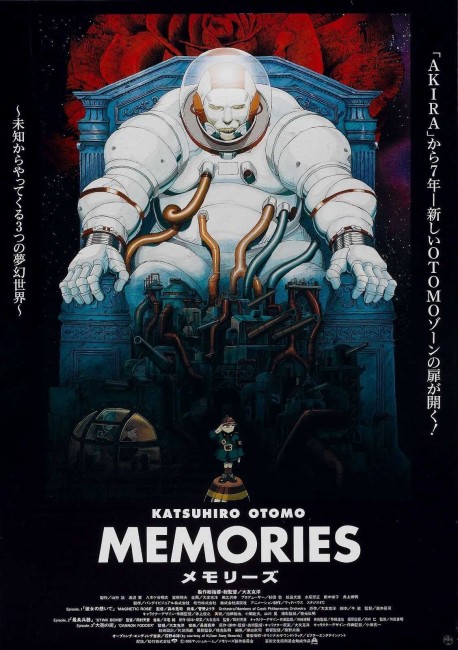 Magnetic Rose:- The salvage ship Corona picks up a distress call coming from a magnetic junk vortex in space and the two crew alter course to investigate. They find a ship that is empty but has oxygen, artificial gravity and halls laid out with incredible finery. They realise it has been built as a mausoleum to the opera diva Eva Friedel. Now however, the ship’s computer is malfunctioning and the projected virtual illusion falls apart around them. Stink Bomb:- Nobuo Tanaka turns up to work in his job as a lab technician at Nishihashi Chemical suffering from a cold. A colleague suggests that he take some of the experimental cold pills on their boss’s desk. However, the pills happen to be a military toxin. The toxin reacts with Nobuo’s cold and kills everybody in the lab. As Nobuo walks out into the countryside, he radiates a huge stink cloud that kills everybody in the surrounding area. The armed forces array all their might to destroy Nobuo but the stink cloud interferes with their equipment. Cannon Fodder:- In a city, everything centres around the firing of vast cannons. The entire populace works on the maintenance of the cannons. A young boy wants to grow up to give the orders, not be a lowly cannon loader like his father.

Katsuhiro Otomo became a cult figure on the basis of the anime Akira (1988), which he adapted from his own manga. In the decade since Akira though, Otomo’s output was variable and he only returned to make one other full-length film of his own with World Apartment Horror (1991), although granted his name in various ways to a host of other anime including Roujin Z (1991), Perfect Blue (1997), Spriggan (1998) and Metropolis (2001). Otomo did eventually return to form sixteen years after Akira with Steamboy (2004), followed by the live-action Bugmaster (2006) and the Combustible episode of the anime anthology Short Peace (2013).

The only other anime Otomo directed in the interim was Memories, which is a trilogy of stories adapted from Otomo’s graphic novels by different directors. Otomo directs the last and shortest episode himself. The most notable other name on the credits is co-writer Satoshi Kon, who went onto direct the Katsuhiro Otomo mentored Perfect Blue and subsequent films such as Millennium Actress (2001), Tokyo Godfathers (2003) and Paprika (2006).

The other two episodes come from directors who have mostly worked in anime tv series, notably Koji Morimoto who subsequently became one of the principal creative talents at Studio 4oC – although his segment is the best in the film, Morimoto has never gone onto make a feature film, although has delivered segments of other anime antholgies such as Robot Carnival (1987), The Animatrix (2003) and Genius Party Beyond (2008).

As always with any anthology, the stories in Memories are variable in quality. The first segment, Magnetic Rose from director Koji Morimoto, is a breathtaking piece. The vistas of the decaying ship – vast hallways of decaying machinery, dresses falling to pieces when they are touched, holographic gardens and vineyards and the holograms being bizarrely intruded upon by jutting chunks of machinery as the ship slowly comes apart, all to haunting operatic music and the beautiful, impossible image of a dead opera singer – have a breathtaking splendour. This is one of the most beautiful of all reality vs virtual illusion films. Although, while Katsuhiro Otomo has an extraordinary power with visuals, he is not that strong when it comes to story and Magnetic Rose falters somewhat when it comes to explaining what is happening – Did the diva kill her husband or not? And who built this vast entombed monument?

After the stunningly arty visuals of Magnetic Rose, Stink Bomb from director Tensai Okamura is a change of tone into outright comedy. The piece amusingly functions as a parody of the ever-escalating scale of action to be found in Japanese fantasy cinema, something that reached a pinnacle with Akira. The scenes with squadrons of helicopters, Navy vessels and tanks all lining up to blow to pieces a nerdish executive riding along on a motor scooter is rather funny. A light item but fun.

The Katsuhiro Otomo directed segment Cannon Fodder is surprisingly the weakest of the film. Its picture of a world centred around the construction and firing of giant cannons is amusing. It is a stylistic joke – but the piece has no real plot, the concept is all there is to it, with the segment not even having a punchline. All it produces is a bemused scratch of the head.