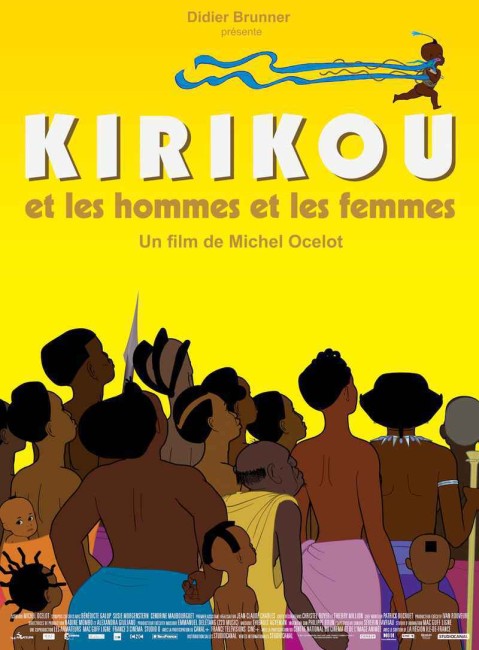 The Roof of the Strong Woman:– When Karaba refuses to allow a village woman to repair the roof of her house in time for the rains, Kirikou’s mother agrees to allow the woman to come and stay at their place but they are unprepared for her demands. The Grumpy Old:– When one of the old men of the village goes missing, Kirikou tricks one of Karaba’s fetishes into locating him. Kirikou has to use his ingenuity to rescue the man who is trapped in a tree by a cougar and then from the wrath of Karaba after the old man insults her. The Blue Monster:– One day, the children of the village come across a boy dressed in a blue burnoose. They are afraid of his strange looks and paler skin but Kirikou is not and befriends the boy. As they realise that the boy is a Tuareg who has become lost from his caravan and family, they try to help him find his way back. The Griotte:– A griotte, a woman who travels about telling stories, comes to the village and gathers everybody at night to tell a tale. Karaba insistently interrupts, wanting the griotte to come and tell stories to her. The Flute:– As the Harmattan wind comes, this disturbs the infants of the village. Various people are able to keep them distracted by making noise. Kirikou has the most success when he comes up with the idea of creating a flute.

French animator Michel Ocelot had an internationally acclaimed hit with his first film Kirikou and the Sorceress (1998). Over the years, Ocelot has returned to tell further tales of Kirikou with Kirikou and the Wild Beasts (2005) and Kirikou and the Men and Women here, as well as creating a Kirikou stage musical. Elsewhere, Ocelot went on to make the equally delightful Princes and Princesses (1999), an anthology of potted fairytales, the Arabian fairytale Azur and Asmar (2006), a further anthology Tales of the Night (2011) and Dilili in Paris (2018), all animated in the same simple line-drawn style.

The Kirikou films are utterly charming – tales of plain child-like wisdom and ingenuity winning out over adult pomposity. Michel Ocelot has a love of West African culture and it shows in the animation that is extraordinarily simple nevertheless imbues the characters with an amazing amount of detail and cultural verisimilitude. The two sequels have improved over that by adding much more depth and especially colour as Ocelot’s budgets grew, while Kirikou and the Men and Women also gets the 3D treatment. As in the two preceding works, the film has no particular structure – is just a series of loose tales.

The first story The Roof of the Strong Woman is probably the weakest of the quintet. This centres around a high-demand woman coming to live with Kirikou and his mother and turning their household upside down, even driving them out, with her demands and criticisms. The episode lacks Kirikou’s usual pieces of ingenuity and arrives at a weak payoff. There is however at least one magical scene – that of Kirikou dancing in a rain shower.

The second story The Grumpy Old (where the French word ‘vieux’, which translates as ‘old’, appears to be used as a colloquial term for senior) plays into the Kirikou ingenuity with some appealing scenes where Kirikou tricks one of Karaba’s fetishes into searching for the cantankerous old, ingeniously finds a way to get him out of the tree and then even more ingeniously outwits the fetishes after they are sent to apprehend the old for insulting Karaba.

The Blue Monster is a perhaps over-obvious parable of culture shock and plea for tolerance as the villagers react to the intrusion of someone different. (This is an episode that seems even more apt watching it four years later as anti-refugee Islamophobia runs rampant across Europe). It works well, ending in the delightful moment where the Tuareg boy tears off a strip of cloth and makes a miniature burnoose for Kirikou.

The Griotte comes together with a very nice ending about the nature of storytelling. Incidentally, this with its reference to the legend of Sundiata Keita, the 13th Century founder/ruler of the Mali Empire, as well as the subsequent episode and its mention of the Harmattan Wind, firmly locates the Kirikou films as being set in West Africa. (Michel Ocelot spent much of his childhood in the West African republic of Guinea).

The final story The Flute works very nicely as we get to see more glimpses of Kirikou’s mother’s background. The orchestra of onomatopoeia comes together rather charmingly at the end and there is an even more appealing finale when Karaba sends her fetishes back to ask them to keep playing.