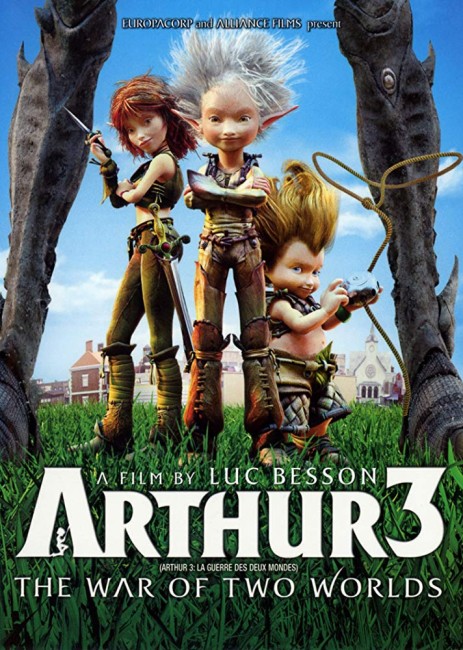 Maltazard has now emerged into the human world at full-size. Stuck down inside the world of the Minimoys, Arthur, Selenia and Betameche try to get to Grandfather Archibald’s study to obtain the potion that will restore Arthur to normal size. However, Maltazard obtains the potion first and uses it to enlarge his warriors. As they attack the town, Arthur and the others race to stop Maltazard.

The oddest among what might be termed Besson’s experiments in the 2000s was the trilogy of films beginning with Arthur and the Invisibles (2006). This was intended as a children’s tale and was made in a mixture of live-action and CGI animation. It was given a US theatrical release in dubbed form but did little business and received few good notices. Despite this, Besson and most of his cast and creative team went onto make two sequels with Arthur and the Revenge of Maltazard (2009) and Arthur and the Two Worlds War here. The sequels received little wide release outside of French-speaking territories. I found Arthur and the Invisibles passable but The Revenge of Maltazard slipped down to a juvenile level of annoying CGI eye candy and adolescent gags such that it took a long time to muster the enthusiasm to finally watch the last chapter.

Luc Besson reminds of Robert Rodriguez who made his name with stylised and amazing action films like El Mariachi (1993) and Desperado (1995) and then jumped into doing a bunch of kids’ movies – the increasingly dreary Spy Kids sequels, The Adventures of Sharkboy and Lavagirl in 3D (2005), Shorts (2009). However, these Minimoy films are far worse than any of Rodriguez’s children’s films, which at least have an infectious enjoyability in their frequently absurdist visual humour.

Here everything (in the animated scenes) is dubbed in annoying kid’s voices and glib one-liners like “That’s gotta hurt” and “Hasta la vista, baby.” Much of the early parts of the film consist of things whizzing about – Arthur and the Minimoys riding through the sewers on the policeman’s badge, trying to exit the taps in bubbles of water, rides on slot cars, fights on toy trains. (Indeed, the middle of the film seems to toss in giant-sized toys for the express purpose of having Arthur and co ride on them). For much of the film, the villains – especially the idiotic Iggy Pop-voiced Darkos – seem to exist to take cartoonish pratfalls. While Lou Reed’s laidback delivery as Maltazard seems better this time, Iggy Pop delivers all of his dialogue as though trying to talk with a mouthful of marbles and all of his teeth removed.

The main problem with these Minimoy sequels is that in terms of story they feel like they only have script enough for a single film and that this has been extruded out to make two films. Both films seem overly padded by pieces of contrived drama – the quest for the Elixir of Life, Arthur’s father calling out the fire department to destroy the bees’ nest, most of the aforementioned action scenes. The film does at least mount a reasonable climax with Maltazard and his soldiers attacking the town aboard enlarged bugs. Besson throws in a mildly amusing but rather strained Star Wars (1977) joke at the end where we meet a young George Lucas.