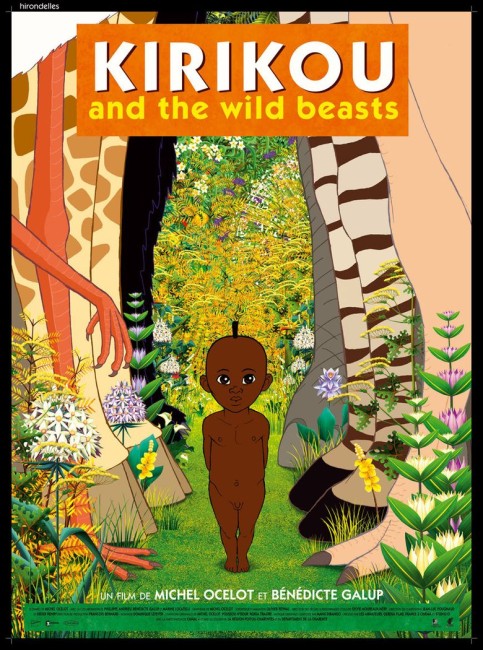 Kirikou’s grandfather realises that the telling of Kirikou’s story was too short and so tells some further tales of Kirikou’s bravery. After Kirikou defeats the creature in the well that was devouring all their water, the villagers eagerly set about irrigating their crops again, but these were then destroyed by a black hyena. After Kirikou drove the hyena away, the villagers were penniless but Kirkou came up with the idea of creating pots to sell at the nearby town. Everyone laughed at the tiny pots that Kirkou made. As they walked to the town, everyone but Kirikou complained about carrying the weight of the pots and eagerly placed them onto the back of a buffalo they found tied to a tree. When they arrived at the town, the buffalo ran away breaking all the pottery and it was only Kirikou who had refused to put his pots on the buffalo’s back who had any left to sell. The sorceress Karaba tried to trap Kirikou with her fetishes but he escaped by climbing a tree and leaving on the neck of a giraffe and this became an opportunity for him to see the splendour of the rest of the country. All the mothers in the village fell ill and Kirikou discovered that someone had placed a poison flower inside a barrel of beer. The yellow flower that cured the poison was only located near Karaba’s temple and so Kirikou had to disguise himself as one of her fetishes to go and steal the antidote.

French animator Michel Ocelot emerged from almost nowhere to charm international arthouse and festival audiences the world over with Kirikou and the Sorceress (1998). Kirikou and the Sorceress was an animated film that approximated African folktales, although was not based on any pre-existing ones as is often misreported. Ocelot’s two-dimensional animation and charming tales of boldness and clear speaking frankness triumphing were completely delightful. Ocelot went onto make a follow-up feature with the equally enchanting Princes and Princesses (1999), a collation of various fairytale-modelled stories, the Arabian Nights fantasy Azur and Asmar (2006), the anthology Tales of the Night (2011) and Dilili in Paris (2018).

With Kirikou and the Wild Beasts, Michel Ocelot returns to the safe ground of his early commercial success and revisits the world of Kirikou with a sequel. As the grandfather narrator says with an appealingly candid simplicity in the opening scene – “The story of Kirikou was too short so we thought we’d bring you some more.” Unfortunately, Kirikou and the Wild Beasts suffers from the failings of most sequels – it is slightly the lesser in that it only seeks to replicate what went before and on a larger scale.

There is distinctly the feeling that Ocelot has used his best material the first time around and that maybe Kirikou and the Wild Beasts is composed of leftover ideas that were discarded as suitable for the first film. The first two episodes dealing with the Black Hyena and Kirkou’s pottery are on the slight side. Moreover, many of these episodes do not focus around the battles between Kirikou and Karaba and without the battle as an overarching structure the stories feels a lot less united and episodic. This is particular evident when the film reaches the end where Ocelot just brings the particular episode to an end, rather than building to the amazing left-field climax that Kirikou and the Sorceress had.

On the plus side, during the latter episodes, Ocelot again discovers the magic that Kirikou and the Sorceress had and Kirikou and the Wild Beasts starts to fly with the charm that the original did. Particularly lovely is the third episode where Kirikou escapes from the fetishes by climbing aboard the neck of a giraffe. Here there are some amazingly beautiful scenes as Kirikou goes for a journey across the African landscape on the giraffe’s head, meeting various different species of animals and discovering the countryside. Ocelot’s depiction of the scenery is visually stunning.

The film also shows Ocelot, who co-directs with his former production designer Benedicte Galup, branching out from the simple 2D dioramas of Kirikou and the Sorceress and animating three-dimensionally. The backgrounds are also much richer and frequently contain a vibrant use of colours, while at the same time also retaining the simple visual design scheme that the first film had.

Michael Ocelot went onto make a further sequel with Kirikou and the Men and Women (2012).