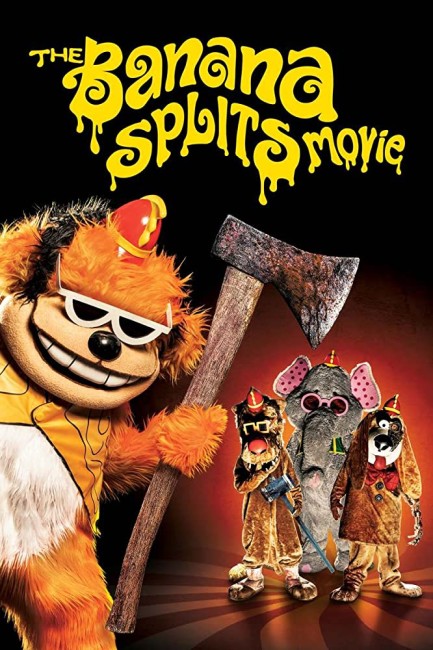 For her son Harley’s birthday party, his mother Beth and the rest of the family take him to Taft Studio to see a taping session of his favourite tv show The Banana Splits. Unknown to them behind the scenes, the producer Andy has made the decision to cancel the show, even though it has been on the air since 1969. Haley’s teenage brother Austin manages to get them an invite backstage after the show. However, the robots that perform the Banana Splits have gone rogue and started killing all the adults.

The Banana Splits were originally a series of anthropomorphic animal characters that appeared in the Hanna-Barbera tv series The Banana Splits Adventure Hour (1968-70). The group consisted of four animals – a dog, a gorilla, an elephant and a lion – who performed together as the title band. The Banana Splits were played by actors in suits that were created by Sid and Marty Krofft who later went on to create H.R. Pufnstuf (1969) and Land of the Lost (1974-6), among other shows. The format was essentially that of a variety show where the live-action performances by the Banana Splits would be interspersed with various animated and live-action story segments. The characters were later revived for a one-hour live-action tv movie The Banana Splits in Hocus Pocus Park (1972).

The Banana Splits, called The Banana Splits Movie in most of the publicity but only The Banana Splits on the credits, is a film revival. It comes with the bizarre idea of turning the innocuous children’s program that was The Banana Splits Adventure Hour into a dark, modern horror film. The brain gets caught in a pretzel trying to process the thinking or how anybody thought this would be perceived – did the filmmakers want to give nightmares to anybody who enjoyed the original series as a child? Were they hoping that audiences would flock to the film and relish the idea of seeing an obscure 1960s tv show being trashed?

Danishka Esterhazy is a director based in Manitoba, Canada who had previously made a series of fairytale deconstructions with the short films The Snow Queen (2005) and The Red Hood (2009), followed by the full-length Suddenly Ever After (2010) and H & G (2013). In genre material, she also made the science-fiction film Level 16 (2018). Subsequent to this, she made the true crime Lifetime tv movie I Was Lorena Bobbitt (2020).

Danishka Esterhazy gets into the assorted death scenes here with great gusto – Kiroshan Naidoo being sawn open on a magician’s table and his guts spilled, Keeno Lee Hector being set on fire and Steve Lund being run over by a car. The main problem I had with The Banana Splits is not its’ trashing of the source material – I haven’t seen the original and have no particular attachment to it – but rather than it feels like a film that wants to be darker and more edgier than it ends up being.

Not far beneath what is going on, The Banana Splits seems a very traditional film. It is shot in clean camera set-ups that feel like they could have been taken from any conveyor belt tv show. The characters are desperately middle-of-the-road – the teenager (Romeo Carero) trying to hook up with the cute girl and help out his little brother; the self-important father (Keeno Lee Hector) trying to push his daughter’s talent; the cheating husband (Steve Lund) exposed. All their dramas are standard ones and come with no twists or unexpected depths.

What I wanted of The Banana Splits is something that dug in with the black humour of Death to Smoochy (2002). In particular the film felt overshadowed by the completely demented Happy! (2017-9), a tv series featuring an cute imaginary child’s toy that became so warped you kept wondering how they managed to get away with it. I wanted The Banana Splits to find something of that but beyond one of two gory deaths, it feels middle of the road and in need of more bite.

The other credibility problem I also have with the film is killer robots. Cinema is filled with assorted killer robots, which I have no issue with. However, here we are asked to believe in the idea of a tv show that has invented animatronic robot animals sometime in the 1960s. Moreover, ones that are capable of complex interactions with children and audiences to the extent of being able to play musical instruments and distinguish between good and evil, child and adult. We are not quite sure why they have suddenly gone rogue and murderous – it is implied, either in reaction to the show being cancelled or because their programmer snapped. On the other hand, it seems a major credibility issue that there could be a technological advancement as sophisticated as animatronic robots capable of such independent interactions and that the only thought someone could think to put them to would be in a clapped-out tv show rather than the considerable application that such things would no doubt have elsewhere.