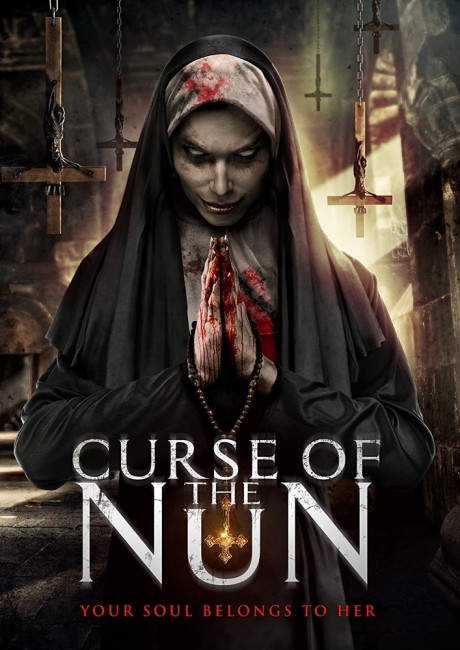 Anna Winter, her husband Mike and Claire, her daughter from a previous abusive relationship, are about to move out from his Aunt Donna’s home. As Anna packs their things, she experiences a series of terrifying apparitions of a nun who leaves messages saying ‘Stay’. Anna then finds that she cannot leave the house. She is joined by the ghost hunter KK. He tells her that the nun used to live there when the house was church property. After dying, the nun believed she was in purgatory and that it was her duty to defend the church grounds against all interlopers.

Curse of the Nun could be considered a Mockbuster – films made quickly intended to exploit a recent fad or sound like the title of another film. In this case, it appears to have been made to exploit the success of the James Wan-produced The Nun (2018), a spinoff of The Conjuring series, which was released thirteen months before this was. The Nun seemed to herald a revival of the Nunspolitation phenomenon – a brief fad of the 1970s featuring killer nuns or nuns in erotic embrace, albeit with a supernatural bent. Following the release of The Nun, we have seen other nun films such as The Bad Nun (2018), Bloody Nun (2018), A Nun’s Curse (2019) and the upcoming Aliens vs Nuns. Curse of the Nun should not be confused with A Nun’s Curse (2019), which came out the same year.

Curse of the Nun was the second film for director Aaron Mirtes who had previously made Clowntergeist (2017). He would follow this with American Hunt (2019), The Alpha Test (2020) and Ouija Craft (2020), as well as producing Death Ranch (2020). Mirtes can be briefly seen on screen as the second pizza delivery driver that turns up to deliver to the house right at the end.

Curse of the Nun is low-budget but Aaron Mirtes gives it undeniable imagination in some places. I liked the opening scene with Brad Belemjian trapped in a room where no matter what door he opens it returns back to the room – a scene lifted from Mario Bava’s Kill … Baby Kill (1966). Mirtes delivers some okay jumps and the film passes better than most of its B-budget ilk. The middle of the film tracks off into some weird kind of rubber reality where Lacy Hartselle seems to be trapped in an alternate version of her life where you are not quite sure what is going on.

I do have a slight believability issue with the casting. I don’t have any information on Lacy Hartselle’s age. One internet source mentions she was born in 1993, which would make her 26 when the film came out, although I cannot find any other source to corroborate this. She looks all of about twenty on screen and could play roles as a teenager with zero problem. On the other hand, we are told she is divorced and has a kid that is eight years old. The question then is – when exactly did she get married and manage to have a kid? Because if she did, she would in all probability have had to have started when she was underage. In actuality, it feels like the role is a part that was written with someone in their thirties in mind that ended up being cast with a younger actress.