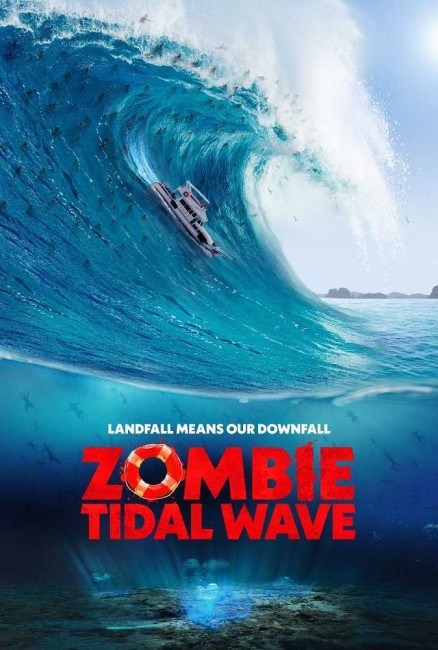 Hunter Shaw is vacationing in Thailand. Earth tremors open up a rift in the ocean floor beneath the wreck of a ship just off the coast. While Hunter is fishing with his friend Ray McCray, they hook in a corpse. This turns out to be a zombie that bites and infects Ray’s wife Jada. A tsunami produced by the earth tremors brings hundreds of zombies with it as it strikes the beach. In the aftermath, Hunter and assorted others are forced to fight for their lives in the face of the zombie onslaught.

Zombie Tidal Wave comes from Anthony C. Ferrante and Ian Ziering, respectively the director and the actor of Sharknado (2013) and five increasingly more deliberately ridiculous sequels. The Sharknado series gained a certain bad movie cult following and made a B-movie star out of Ziering whose career gained a whole new lease of life.

Zombie Tidal Wave was made in Thailand, which has become a go-to location for a number of low-budget filmmakers in the last few years because of cheap production costs and easily available locations in a temperate climate. In this case, the funding for the film appears to have actually come from Thai companies. You get the impression that the Thai producers approached Anthony Ferrante and Ian Ziering in the hope that they would come to Thailand and make another Sharknado.

To this extent, Ferrante and Ziering have even brought in Thunder Levin, the scriptwriter of all the Sharknado films, who comes up with the story along with Ian Ziering. There seems to be the clear intention from the choice of a Deliberately Ridiculous Title that everyone was aiming for the same tongue-in-cheek vein as Sharknado nd to create another title that mixed monsters with weather phenomena. On the other hand, it is evident in the finished result that whatever the Thai backers sought to get out of Ferrante, Ziering and co with Zombie Tidal Wave, they didn’t receive it. The film turned up on the Syfy Channel and belatedly on dvd but garnered little attention, certainly nothing on the level that the Sharknado films did.

Despite such a title, Zombie Tidal Wave plays out as no more than a regular zombie film – there is nothing more to the ridiculous concept than the central premise of a tidal wave as the means whereby the zombie onslaught is carried ashore. Thereafter we get all the usual running about, avoiding being eaten, a certain number of gory despatches (but not too gory because this is the Syfy Channel) and an improbable scheme to electrocute the zombies by luring them to walk into a puddle of water with cables running into it. There is little here that plays out any different from the standard. As always, Ian Ziering plays all the nonsense with remarkably intent seriousness.