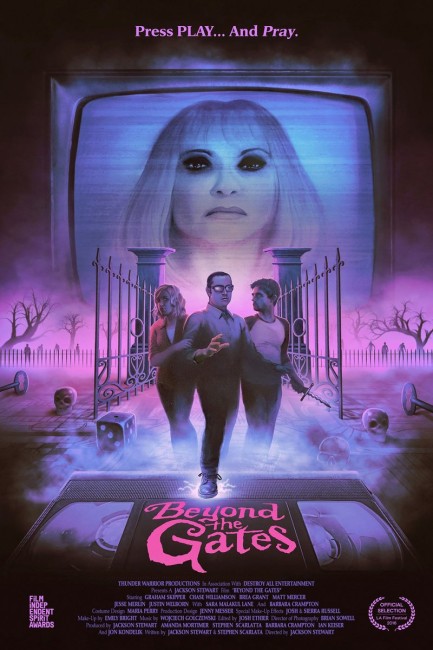 Gordon Hardesty returns to town and joins his brother John in cleaning out the videostore owned by their father who mysteriously disappeared some months ago and is now presumed dead. During the cleanout, the brothers find a copy of the video boardgame ‘Beyond the Gates’. Over dinner with Gordon’s girlfriend Margot, they decide to play it. They are startled when the game’s host talks to them directly and tells them they need to save their father’s soul. They are required to decipher cryptic clues and find several keys located around the town. The keys turn out to kill people they know. As the keys are brought together, the brothers are required to enter the realm of the game to rescue their father.

The horror-themed video boardgame was a fad unique to the 1990s. This began with the game Nightmare/Atmosfear (1991) from two Australian designers who sold it to a video distributor. In the game, players would sit around a standard game board, roll dice, move their counters and collect various coupons as The Gatekeeper (played by an actor) taunted them from a video that played on the VCR. The result became a modest hit and there were several spinoffs and imitators. Beyond the Gates is the sole example of a horror film paying tribute to the novelty fad of the video boardgame.

Beyond the Gates was a directorial debut for Tucson-based filmmaker Jackson Stewart. Stewart is clearly a fan of 80s gaming and had previously made the short film The Cartridge Family (2011) where characters from a 80s-era videogame try to adjust to the real world. Stewart has intended Beyond the Gates as a homage to the VHS era – the opening scene touring the videostore with aisles and aisles of videotapes makes the mouth water for anyone who lived back then (as this author did).

I was intrigued to see what Beyond the Gates would do with the idea. The very title suggested the fascinating idea of players having to venture inside the game and trying to survive in its world. Alas, this never happens until the climactic scenes. Even then, these scenes are routinely by the book and simply look as though the filmmakers have shot in their own basement and suffused everything with mist and coloured lighting.

The frustrating part of the film for me was that Jackson Stewart and co-writer Stephen Scarlata fail to delineate the rules of the game – we never actually see the players move around the board or find how it is possible to win the game. Moreover, the script has the gameplay somehow spilling over into the real world and the brothers’ friends being repurposed as NPCs with keys embedded in their bodies. (This does result in one cool splatter effect where Justin Welborn has his intestines torn out in the middle of a bar). The film seems too slow, never creates much urgency about the playing of the game. It is a measure of how ineffective a horror work is when it needs to resort to fake dream scenes in order to make an audience jump. An interesting idea but it ends up not very well presented or that interesting a film.